Four-Lane Bridge to Serve 'Land Between The Lakes'

The $128 million project is the second of two bridge replacements. 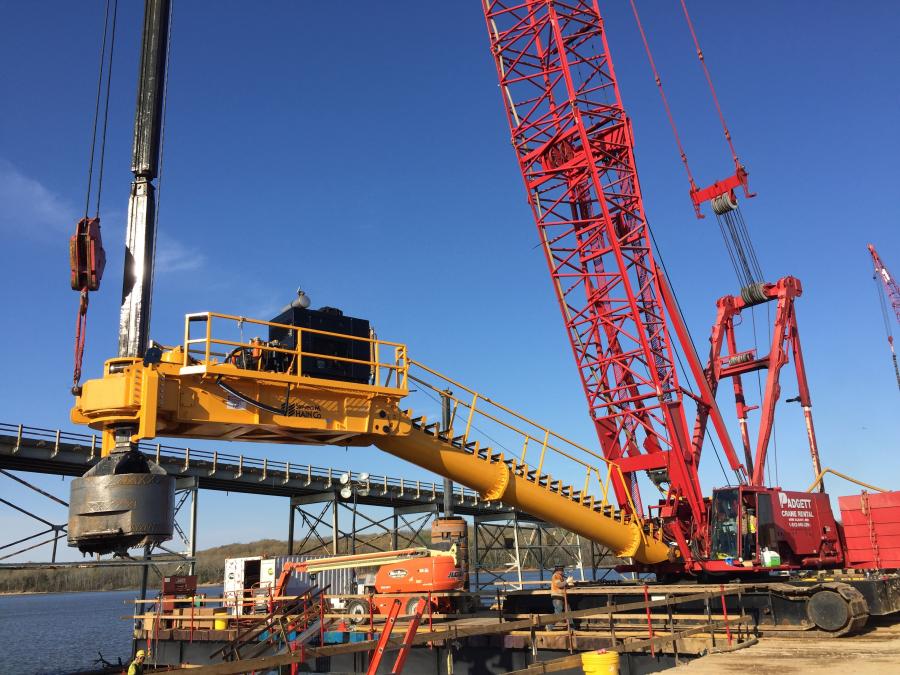 Equipment on site has included crane-mounted drill attachments and reverse circulatory drills for installation of the drilled shafts.

Crews in Kentucky are working to complete a modern, four-lane bridge to carry U.S. 68/KY 80 over Lake Barkley, and serve as the eastern entrance to Land Between The Lakes National Recreation Area. The $128 million project is the second of two bridge replacements.

“We are currently working six headings on the project,” said Eric Chavez, project manager, PCL Civil Constructors Inc. “Roadway work and paving operations are finishing up for the season on the west approach. Foundation installation, 72 and 84 inch drilled shafts are being installed on the west approach. Approach and main span substructure is working three headings.”

Jim Smith Contracting was awarded a contract in 2014 to construct causeways and also a new bridge over a lagoon on the west side of Kentucky Lake, just north of U.S. 68/KY 80 and adjacent to the Kenlake State Resort Park campground. The lagoon bridge forms an approach to the main lake bridge. Construction of the main bridge was performed under a separate contract by Johnson Brothers Corp.

The new Kentucky Lake bridge is already completed. For the Lake Barkley replacement bridge, crews are setting the first span of structural steel for the approach superstructure and erecting a basket handle tied arch on barges. It will be floated into position on the main span substructure in January 2017.

“The foundations are the biggest challenge,” said Chavez. “The varying rock and soil conditions along the alignment of the new bridge make it difficult to determine what equipment is necessary to install the drilled shaft. We have two different kinds of drills on site, to attack the varying depths of rock sockets and to handle most conditions we encounter.”

Kentucky Transportation Cabinet crews performed all the preparatory work for the replacement bridge prior to letting the project. PTL workers are currently in the planning stages of demolition, which will take place at the end of 2017.

“We have completed the east approach foundations, abutments and the west and east approach roadways,” said Chavez, who added that erection of the steel girders for the approach bridge spans has yet to be carried out. Crews are looking to an intermediate milestone of switching two lanes of traffic to the new bridge by March 13, 2018.

Equipment on site has included crane-mounted drill attachments and reverse circulatory drills for installation of the drilled shafts. A vibratory hammer also is being used to install the temporary casings. The casings range from 96 to 120 in. (243 to 304.8 cm) diameter, and from 40 to 120 ft. (12 to 36 m) in length. Manitowoc 888, 999 and 2250 cranes also are required during construction.

Main materials being used on the bridge project include structural steel, concrete, asphalt and reinforcing steel.

In January 2016, Lake Barkley reached near record high water elevation. This forced crews to move equipment off the trestles, until the water receded. Winter weather also is a concern moving forward.

Chavez said the most time-consuming part of the work, is managing the six different headings on the project.

“We access all the work from our trestle, and with three cranes on the trestle, coordination becomes key to the success of the different headings.”

The new bridge features a basket handle arch design, which allows for the 550-ft. (167 m) span.

“The Cumberland River is heavily traveled by tug boats pushing flotillas of various commerce,” Chavez said. “We are building the arch on barges, then we will raise the arch 65 feet and float it into the main navigation channel, setting it on the main span piers.”

Chavez said safety on the job is a top priority.

“PCL strives to be a zero incident company. We try to achieve this by hazard identification and elimination, along with training. We also have a full-time HSE supervisor on site.”

Chavez also said that motorists are not really inconvenienced during construction.

“Since we have the trestle and are able to take deliveries from it, we rarely affect traffic with lane closures.

“The complexity of the foundations and the basket handle tied arch keep us on our toes. Our PCL team, along with Kentucky Transportation Cabinet, have a solid working relationship, which makes it easier to perform our work.”

Once completed, the Lake Bridges Project will provide a continuous, four-lane route from Aurora to Cadiz, crossing both lakes and Land Between The Lakes. It will eventually be part of a four-lane corridor from Mayfield to Bowling Green.

Construction will be completed by April 2019, and is tied to the reconstruction of a section of U.S. 68/KY 80 in western Trigg County.

Rogers Group was awarded a $54 million contract for approximately 8 mi. (12.8 km) of new four-lane highway between Cadiz and Canton. The project supplies a missing link in the long-awaited U.S. 68/KY 80 four-lane corridor through southern Kentucky.

“This reconstruction project in Trigg County brings us another step closer to the completion of the four-lane east-west corridor across southern Kentucky,” said Gov. Matt Bevin. “Work is progressing on the new bridge over Lake Barkley, and completion of this section will provide better accessibility for tourists visiting the scenic Land Between The Lakes National Recreation Area.”

The work includes construction of a new four-lane roughly paralleling the existing roadway from the intersection of U.S. 68-Business at Cadiz extending to the east end of the Lake Barkley Bridge at Canton.

Engineers in KYTC District 1 conducted a pre-construction meeting with the contractor, with the expectation that some earth work could start near the east end of the project early in the year. However, the contractor was required to obtain a number of permits for work in environmentally sensitive areas near Lake Barkley before work could extend to the western end of the project corridor.

“Our goal is to have traffic running on this new section shortly after the new U.S. 68/KY 80 Lake Barkley Bridge is completed,” said Mike McGregor, KYTC District 1 chief engineer. “This project will improve connectivity and safety, as well as promote economic growth along the US 68/KY 80 corridor.”

The project is federally supported, and with the recent passage of the federal surface transportation bill, steady funding was available to complete construction along the corridor.

“The biggest concern on the project is acquiring the final environmental clearances to perform construction in certain areas,” said McGregor. “Also, it's a significant challenge to meet the mitigation requirements for constructing new earthen fills in the Army Corps of Engineers permitted flood zone. Finding areas that can be excavated in the flood zone to offset any new fill is challenging, because of very limited locations that meet the criteria.

There also were other areas that were deemed to have archeological significance, and thus had to be investigated, evaluated and protected per environmental standards.”

According to McGregor, planning for the corridor improvements took well over a decade.

“The project design team had to coordinate with the Federal Highway Administration, U.S. Fish and Wildlife, U.S. Coast Guard, U.S. Army Corps of Engineers and many other regulatory agencies, in order to meet the requirements of those agencies prior to constructing such a roadway in this environment. The Army Corps of Engineers requires that the permittee excavate one cubic yard of material for every one cubic yard of new fill added somewhere else in the flood zone,” said McGregor.

“ Given the range of challenges that has faced this corridor, it's very satisfying to finally see construction underway. We look forward to the day the entire corridor is open and filled with cars and trucks.”