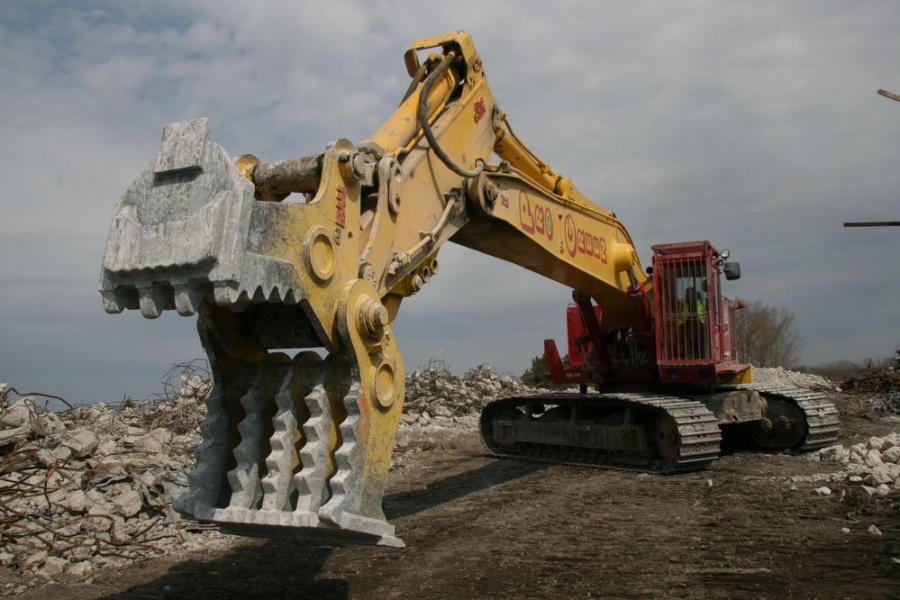 An up-close view of Nye’s heavy-duty concrete pulverizer, an attachment offered among many others by National Attachments.

American commerce was built on the close, personal relationships developed between companies or between a company and its customers. To be successful, each party mutually benefits from the business exchange.

Though it may sound quaint to some, commerce still runs best when done the old-fashioned way: keeping up either a face-to-face contact or, at the very least in 2019, a personal phone, text or email exchange.

Locke Rowe and Gabe Guimond have chosen to employ all of those methods to keep their business relationship going for almost 14 years, despite having 870 miles between the two family-run operations.

Rowe is the vice president of Smith-Rowe LLC, a full-service Mount Airy, N.C., civil construction company that works on up to 40 projects a year across the two Carolinas, Virginia, Tennessee and Georgia. The firm was started by Rowe's father, David, and his partner Russell Smith in 1983 as little more than a two-man outfit focusing on bridge projects.

Today Smith-Rowe still specializes in bridge work, but with the addition of many more services, it has grown significantly in just the last decade from 80 people to approximately 340 full-time employees currently. Many are in Mount Airy, but Rowe also has crews stationed in other parts of his coverage area to be close to ongoing projects and different markets.

Distance Is No Impediment

Rowe depends on Guimond and National Attachments to supply him with the toughest tools available to work on the former's various construction sites.

Located far to the north in southern Maine, National Attachments Inc. is a well-regarded distributor currently celebrating 30 years in business. It will recognize the milestone on Oct. 4 by opening a new facility on six acres that combines its offices, showroom and shops under one roof.

Among the myriad of attachments that the company offers exclusively are Nye concrete pulverizers and Nye SHX stump harvesters — both essential tools for Smith-Rowe.

Nye's heavy-duty concrete pulverizers and crushers are produced to fit all excavator makes and models from 10- to 110-metric tons. They are designed to 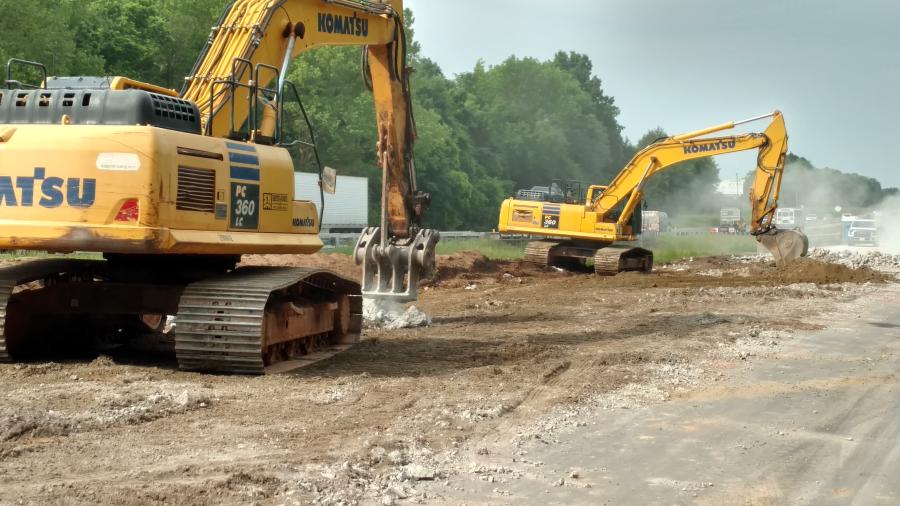 crush precast or cast-in-place concrete and asphalt. Custom-fabricated with 120,000 psi quenched and tempered steel plate, hardened pins and aluminum bronze bushings throughout, these monsters are among the world's toughest equipment of their kind. Nye's Digital Pulverizer is patented by Nye and National Attachments.

Nye stump harvesters are also extremely strong in their ability to split and rip stumps by applying extreme twisting and prying forces. Nye's harvesters slice through the toughest stumps, grub-out all the roots and rocks, and split large hardwood logs with ease, using large, durable jaws, a strong three-position mechanical brace, or a 5,000 psi hydraulic cylinder. Patents are pending on this invaluable land management tool.

Thrown Into the Fray

The Nye attachments are also currently in action on two different Smith-Rowe road projects. In Greenville, S.C., Rowe's Nye pulverizers were working in mid-September on crushing concrete from the demolition of the old southbound Interstate 385 bridge over Interstate 85. A longer duration project for Smith-Rowe is the building of the 35-mi.-long Winston-Salem Northern Beltway, southeast of Mount Airy. Much of the path for the beltway is rural and wooded, meaning Rowe's crews can now be found grubbing and clearing land. The best tool for that work is the Nye stump harvester.

As an example, at one site along the route in northeastern Winston-Salem, Rowe has two stump harvesters, each mounted on Komatsu excavators, and working in tandem with another machine.

"It grubs up the tree stumps and splits them before moving the pile to where another Komatsu with a rake/thumb on it feeds the grinder we have out there," he explained. "Like the pulverizers, Nye stump harvesters have proven to be reliable pieces of equipment for us."

Smith-Rowe also used the Nye pulverizers earlier this year to take down the Interstate 40 westbound bridge over the Yadkin River, southwest of Winston-Salem, as part of a replacement project. The company's crews and Nye attachments will be back again next year to demolish the interstate's eastbound bridge.

Guimond, as vice president of demolition products, developed a rapport with Rowe right from their first meeting. Since then, he said, Rowe has bought an average of one or two attachments every year from him, including three pieces so far in 2019.

National Attachments has supplied Smith-Rowe with the latter's current inventory of four Nye mechanical pulverizers and a like number of stump harvesters, as well as a Nye mechanical grapple, two Pladdet hydraulic rotating grapples and one Euroram hydraulic pulverizer/shear.

Rowe is very happy with the service Guimond's company provides, including being able to get products and parts to him as soon as possible to keep Smith-Rowe's operation moving.

"Whenever I need attachments, Gabe is the guy I talk to," Rowe said.

Added Guimond: "Since I first met Locke at a trade show in 2006, we have gotten comfortable with one another and it has proven to be a good business marriage for a long time. He knows we build everything to machine spec. It takes me anywhere from 4 to 8 weeks to turn a tool out the door, depending on the time of year and what our production schedule is like at the time. Also, with Locke having four pulverizers, we can maintain one while the other three are working.

"Locke started with mechanical pulverizers because he was a bridge contractor first and foremost, before he got into performing a lot of other services," Guimond said.

Growth Due to Necessity

The growth of Smith-Rowe and its expansion of services was not so much because the company wanted to go much beyond bridge work, but because its hand was forced.

"We were primarily a bridge-building company until 2006," Rowe explained. "We had begun to have problems with subs on our jobs, so we decided we would just handle the grading ourselves, then it was the clearing, and the next thing you know we are putting in the water lines. So, the number of services we provided grew, not necessarily because we wanted it to, but because we couldn't get competitive pricing for the work or, in some cases, were unable to find anybody to do it at all.

"Now, we realize we were right not to want to narrow our opportunities because they may not always be there. Diversifying our business is important in today's market."

Among the other duties Smith-Rowe provides are utilities, highway signage, walls and foundations and concrete saw cutting.

Smith-Rowe's business savvy also led to the company acquiring Intercoastal Marine LLC, based out of Wilmington, N.C. It has a full-service barge and crane fleet with certified construction divers to work all along the southeastern Atlantic coast. The company's capabilities include vessel/underwater salvage and any type of marine construction requiring floating platforms, such as bridge work, utility lines/outfalls, major foundations, marina/dock systems and concrete and steel repair work.

"We had done a couple demos for them where we formed a business relationship, so when an opportunity arose to buy the business we decided to do so," Rowe added. "We figured it was a great way to have a more permanent presence in the eastern part of the state and create a new market for us. They had the marine knowledge and we didn't, so it was a great addition."

Rowe said about 40 people work at the facility just north of Wilmington. Recently, Intercoastal Marine was contracted to remove hurricane-related debris in the Cape Fear River at N.C. Highway 701 in Elizabethtown, near Fayetteville. On that project, Smith-Rowe used its newly acquired Pladdet grapples, purchased from National Attachments.

"National Attachments has a large distribution system across the country because we work with dealers and end-users alike, such as Smith-Rowe," he added. "We gained trust in the marketplace with end users and now more dealers are asking for our products, because our tools are just that good."

The physical address for National Attachments Inc. is 29 Olde Canal Way, Gorham, ME; online at www.nationalattachments.com. To phone, call 800/839-9981. CEG