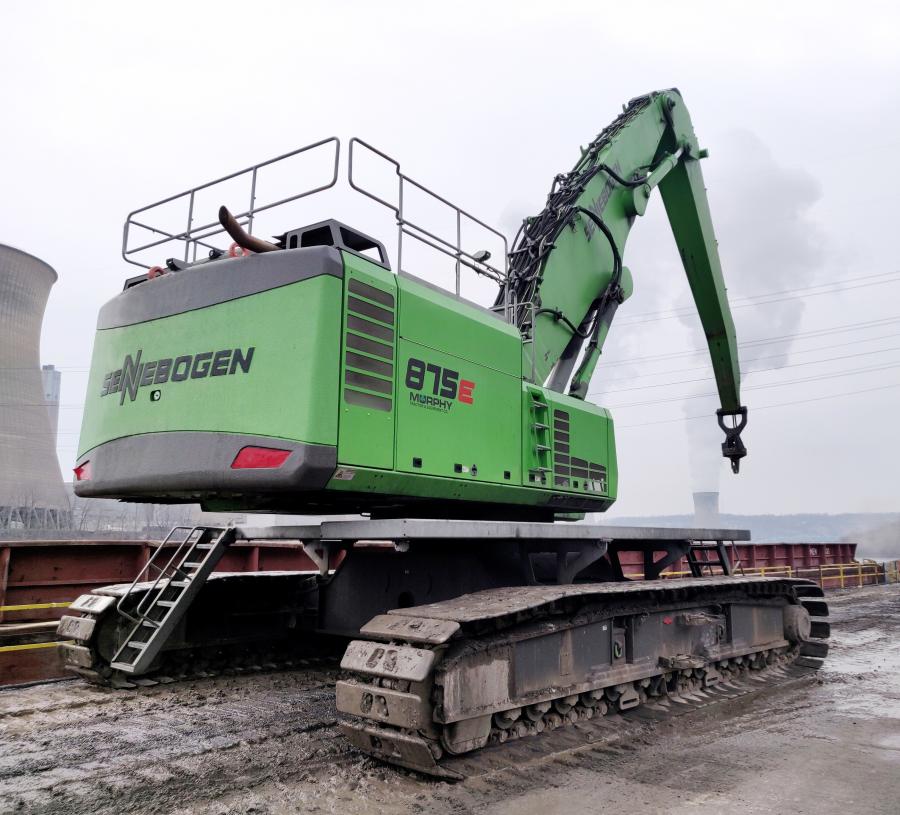 With the reach and visibility, the 875 at Watco has reduced cycle time significantly.

When Jon Mihalic's last cable crane operator retired recently, he knew the time had come to also retire the aging Manitowoc 4000 crane from his barge dock.

Mihalic heads the Watco Companies barge and rail terminal in Industry, Pa., near Pittsburgh. His two berths on the Ohio River handled 529 barges of ferro-alloy, gypsum and steel last year, serving 20,000 trucks in and out. As the terminal's assistant general manager, he led the search for a new machine to replace the cable crane.

A Split Vote Goes to Sennebogen

His team's survey of new lifting equipment quickly narrowed down to two candidates: a 308,000 lb. (140,000 kg) purpose-built material handler from Sennebogen, or 235,000 lb. (107,000 kg) hybrid excavator model similar to others in use at various facilities.

The Watco team was leaning toward the proposal from Murphy Tractor for a Sennebogen "Green Hybrid" 875 R-HD, but it came to a split vote.

"I was the hold-out," Mihalic said. "The sheer lifting power of the Sennebogen 875 would give us a significant increase in capacity, plus the powered rotating attachments we wanted. I just did not believe the fuel figures that Sennebogen was quoting to us."

To make his decision, Mihalic contacted other owners of the 875 working on the Ohio and Mississippi waterways.

"They all said the same thing," he said. "For fuel efficiency, there's just no comparison." 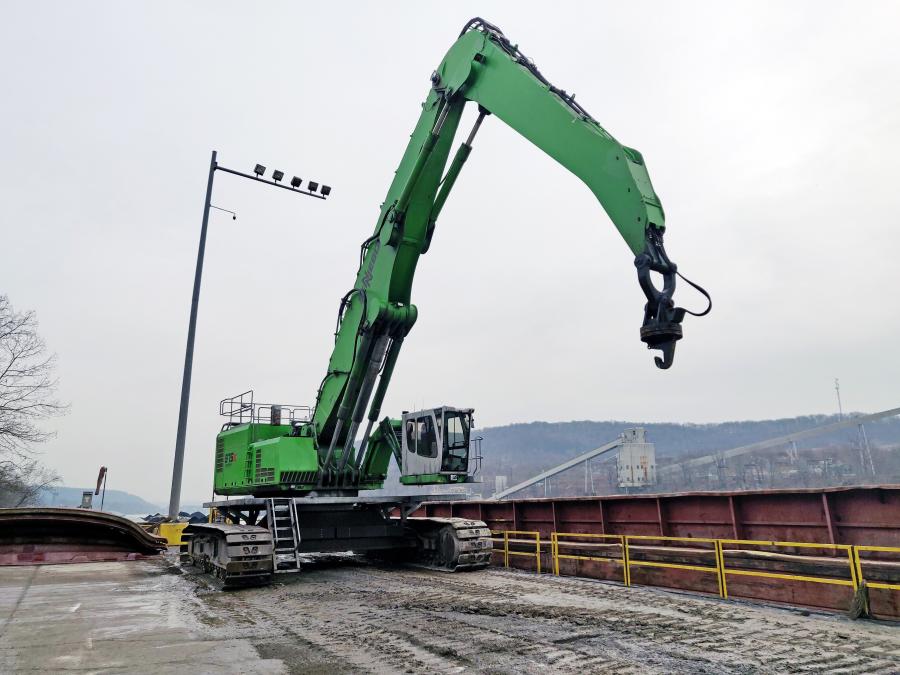 The middle cylinder on the Watco's 875 is the energy recapture cylinder. Fuel savings has made them a hybrid believer.

The 875 R-HD is the flagship of the distinctive Green Hybrid series of heavy-lift machines that Sennebogenfirst unveiled in 2014. These models are easily recognizable by the massive center hydraulic cylinder mounted between the two main lift cylinders that operate the boom. The Green Hybrid cylinder is the heart of a novel energy recovery system that uses the weight of the boom to capture energy on each down stroke, then releases that free energy to provide lifting power for the next load. Fuel savings with the Green Hybrid system are dramatic — up to 30 percent less fuel compared to conventional material handlers.

Mihalic has now seen the results for himself. He was skeptical of the Green Hybrid concept. Then, when he looked closely at the system, he found that it's "surprisingly simple." His 875 consumes half the fuel of the converted excavators used by other facilities.

"The Sennebogenis 50 percent bigger than our excavators, but they burn about the same amount of fuel. That's significant for us."

Twice the Production; Half the Crew

Convinced that the potential fuel economy with the 875 was real, Mihalic put the 875 to work in August of 2018. The new machine typically works a 10-hour/day, or runs up to 16 hours on a busy day. Equipped with 6-yard bucket, the 875 also has delivered on the increased throughput that Mihalic was counting on.

"On steel coil barges where unloading might have needed a shift or shift and a half to complete before," he said, "the Sennebogen will finish in 4 hours. With a much smaller crew.

"It took some getting used to for our operators to get comfortable with the 875's hydraulic power and the elevating cab. But they've come around. Our biggest advantage is on steel barges: the control we have now, versus the cable crane, you can't even compare it."

The Only Number That Matters 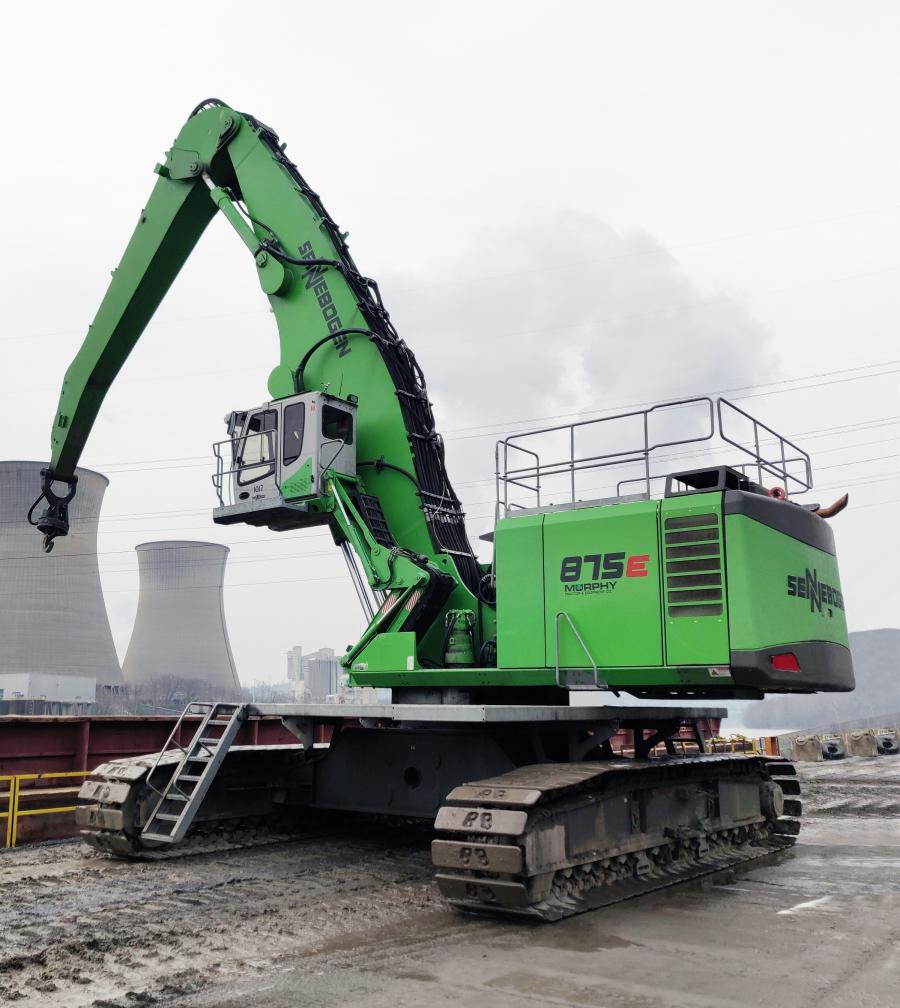 With the elevated cab, the operator clearly sees right into the barge.

"We don't look at the whole load chart. We look at how much it can lift from the outside wall of the barge from about 12 ft. below grade, or our below dock level — that's the only number that matters."

Mihalic gives much of the credit to the powered rotator that carries the C-hook used to lift coils and billets.

"You can put it anywhere you want it, very quickly; the old crane required a worker in the barge to place the C-hook into each coil; now the 875 operator can turn the hook any way he needs to, and engage the coil. We put a bunch of plywood out on the dock and the 875 just buries the forklifts that put the coils away. We're unloading 120 coils in 4 hours, with a crew of one. It's impressive."