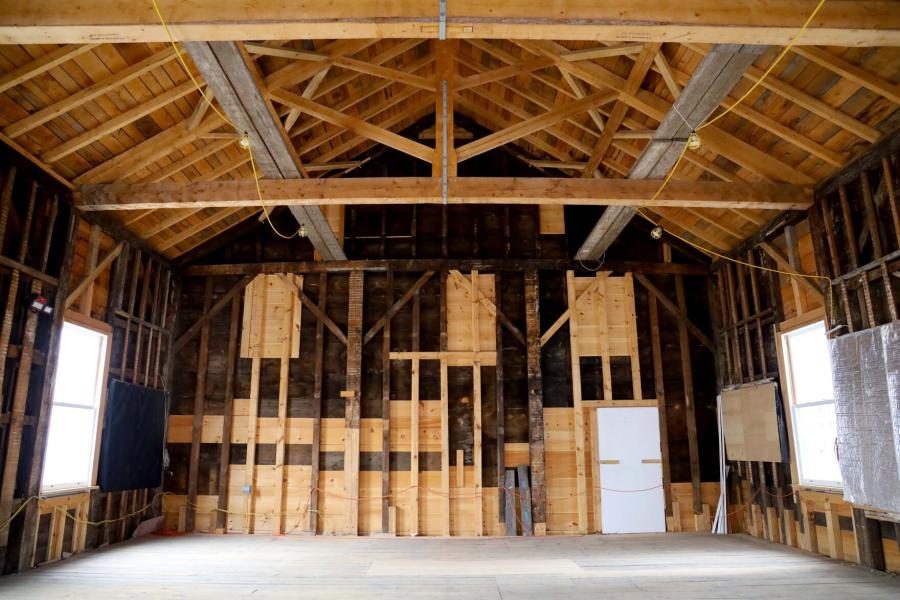 The interior of the Abyssinian Meeting House. The lighter colored boards are new construction, while the darker, more weathered boards date back to the original construction in 1828. (Esta Pratt-Kielley/Maine Public photo)

Standing in the cavernous wooden interior of the Meeting House in Portland, Maine's Munjoy Hill neighborhood, Pam Cummings pointed out part of the floor that has been replaced and some of the older boards that remain from the original 19th century construction, as well as bits of history etched into the floor.

"The marks here are where the pews were," she said during a Maine Public Radio report on March 15.

The Abyssinian Meeting House in Portland is recognized as one of the most important sites of African American history in the state. Built 200 years ago, the meeting house served as a church, a school for African American children, and a hub of anti-slavery organizing.

Now, Cummings leads a local group, the Committee to Restore the Abyssinian Meeting House, which, for about 25 years, has been working to bring the historic building back to life.

In mid-March, she hosted a tour of the old church for Maine Congresswoman Chellie Pingree, who secured $1.7 million in federal funding which will go toward interior construction, a new museum exhibit space, and an elevator to make the building ADA compliant, among other improvements.

Cummings described the money as a "game changer" that will allow her group to finally complete the project. She told Maine Public Radio that restoring the church is a crucial step in elevating African American history in the state.

"We have a history too," Cummings said. "We do belong, and our people did great things."

Not only is the church important to Maine's history, she added, but to U.S. history as well.

The evidence for that is many of the Abyssinian Meeting House's leaders and congregants were deeply involved in helping escaped slaves through the Underground Railroad, a network of people, both African American and white, that offered shelter and aid to slaves desperately trying to leave the South before the Civil War.

Pingree, whose district includes much of the coastal region of southeastern Maine, said the restoration group should receive the funding soon, after President Biden signs the new federal budget. Once the church building is restored and open to the public, she said it could play a role in broadening the lens through which the state's history is seen.

Cummings said her group wants to complete the restoration within the next year and re-open the Abyssinian Meeting House building to the public soon after.