Funds to Fix Connecticut's Roads, Bridges Drying Up, No Solutions in Sight 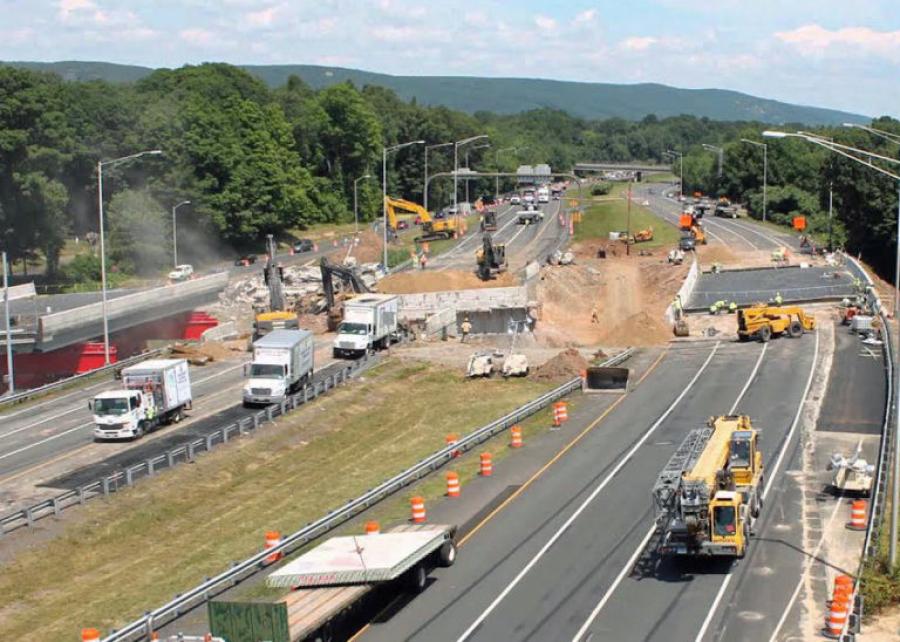 Construction and maintenance spending on Connecticut’s highways has decreased.

While the coronavirus dominated summer headlines, Connecticut's five-year effort to accelerate the transportation rebuilding program slowed to a stroll on July 1.

A risky initiative to force tolls — by borrowing and spending billions of extra dollars on new projects between 2016 and 2020 — concluded on that date, without those fees or any other plan to pay for all of it.

Now the state is left with a $2.8 billion bill, a cash-starved Special Transportation Fund (STF) headed toward insolvency and a construction industry poised to shrink even as the state struggles with unprecedented unemployment.

Unless Gov. Ned Lamont and the legislature order more revenue for transportation — a risky proposition as they near a new state election cycle — construction and labor leaders say Connecticut's aging and congested highways, bridges and rail lines are at risk of further deterioration.

And the administration already has begun to delay transfers of funds to the transportation building program, something advocates say will only postpone projects.

"Once we get out to the next several years, nothing is [fully] funded," explained Nate Brown, vice president of the Connecticut State Building Trades Council. "It's a construction industry issue statewide, and the men and women who rely on that as a living could have some really severe consequences going forward."

"It's going to significantly hamper the state's ability to make any progress at all," said Don Shubert, president of the Connecticut Construction Industry Association, warning that construction contractors and workers could soon migrate to other states to find employment.

"The construction industry pulls back as soon as it recognizes uncertainty. Drastic cuts like this cause deep adjustments in the industry."

Now, faced with the overlapping problems of more debt to pay off, more infrastructure needs, the lack of a new revenue source and less of an appetite to borrow, the state's transportation funding situation is dire.

There are not many ways out of the jam.

These "drastic cuts" center around slightly more than $900 million Connecticut is expected to borrow in 2021 for transportation work.

Transportation borrowing, which enables Connecticut to qualify for federal construction grants, is paid for by the STF — which is supported primarily by two fuel taxes and a share of sales tax receipts.

Making the Connecticut Department of Transportation (CTDOT) wait longer for less money helps keep borrowing costs down as the bill for the "ramp-up" comes due. But it also will slow infrastructure repairs, Shubert and Brown noted — an odd prospect given that Malloy, Lamont and other leaders have warned constantly that the rebuilding was proceeding too slowly and barely maintaining a state of good repair.

"The key to an efficient transportation program is long-term, dedicated, dependable funding," Shubert said. "As soon as you break from that, it affects the CTDOT's ability to plan and deliver projects immensely."

Bonding Backlog Explodes Over the Past Decade, Costing Jobs

When Malloy took office in 2011, the state had $1.7 billion in approved financing for transportation, but it didn't have the cash in hand — partly because it couldn't afford to make the debt payments on it.

By the time Lamont succeeded Malloy in 2019, the amount approved, but not borrowed, was up to $3.8 billion.

Every $1 billion in stalled bonding translates into 10,000 construction and related jobs that could have been created, said Fred V. Carstensen, who heads the University of Connecticut's economic think-tank.

"Clearly one of the things that is hamstringing the state's economy is that we have bad infrastructure," he said. "Now you're putting austerity on top of that?"

But the linchpin of Malloy's "Let's GO CT!" plan was that by 2020, state officials would have embraced tolls — or some other new funding source. With that money, Connecticut not only could have maintained the accelerated pace of repairs but enhanced it further.

The governor formed a study panel to figure out how to cover the long-term costs. Meanwhile, the ramp-up went forward while the administration dreamed big.

Under Malloy, the DOT established a "vision level" annual investment in infrastructure of $3.2 billion per year, enough to maintain safety and make various strategic improvements to relieve congestion.

Technically, the study panel offered both tolls and gasoline tax hikes as options to pay for the borrowing but spent most of its January 2016 report pitching tolls as the best solution.

By the beginning of 2016, faced with the prospect of backing tolls and slipping further in the eyes of voters, Malloy said he would support no new funding source until legislators endorsed a state constitutional amendment to create a legal "lockbox" to prevent transportation-related revenues from being spent on other programs.

By the time voters ratified that amendment in November 2018 by an 8-1 margin, Malloy was a lame duck in the final two months of his tenure, and the tolls question would have to wait.

Lamont, who took office the following January, proposed tolling all vehicles in his first year and modified the pitch to involve trucks only in his second. Legislators declined to act on either, fearing a voter backlash.

But Connecticut's bonded debt doesn't care about the polls.

Projections from Lamont's budget office show debt costs in the state's STF jumping 23 percent in the next two-year state budget and by 40 percent over the next four years.

The STF is running $61 million in deficit this fiscal year, and the administration says, at this pace, it will have exhausted its meager reserves and reached insolvency by late 2024.

But between now and then, two things will happen: Lamont and legislators must adopt a new, two-year state budget this spring — which could fix the transportation fund. And there's also a statewide election in 2022.

When asked whether he would ask legislators to increase gasoline taxes or raise some other form of new revenue for transportation this year, Lamont said he's hopeful President Joe Biden's new administration will increase federal aid in this area.

But the governor also has acknowledged that won't solve all of Connecticut's problems in the long term.

"The legislature didn't want to make a hard decision," Lamont added. "My job this year is to give them some other ideas that would make the fund solvent."

But that could be taken two ways.

It could mean the governor simply could release updated research, showing how much money various tolling, gasoline tax and other revenue proposals might raise.

Or he could formally endorse one option, such as a gas tax hike, in the two-year budget he will propose to the General Assembly in early February, a move that brings greater political risk.

Rep. Roland Lemar, co-chair of the legislature's Transportation Committee and a supporter of tolls, agreed with Lamont that getting tolls approved this year is unlikely.

But Lemar also said Connecticut cannot afford to simply let its transportation building program slip dramatically, adding that's a threat not only to highway safety but also to the economy.

"I'm open to seeing what the budget proposals are, but I don't see any way possible that we could cut our way to a positive result," he added. "We've yet to find anyone who's willing to do the hard thing."