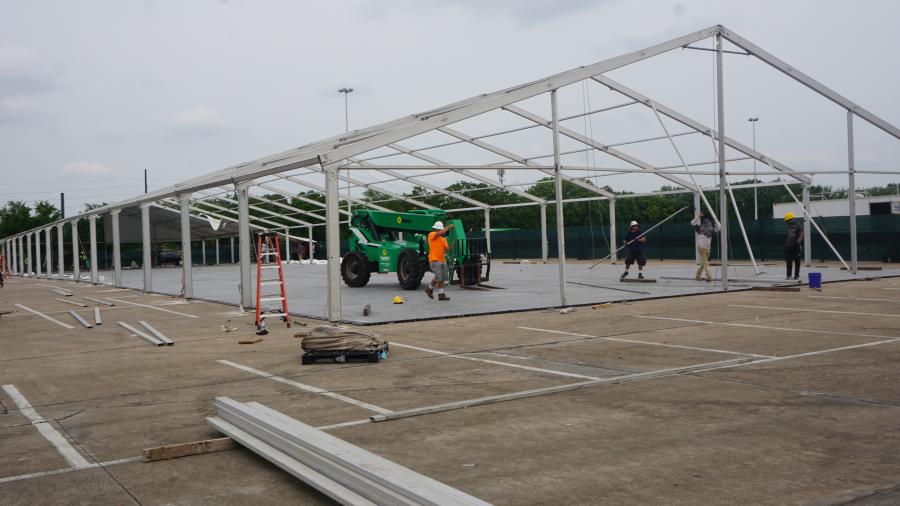 Crews are erecting a structure with the help of a telehandler. You can see the floor placed on the parking lot surface.

Due to the novel coronavirus (Covid-19) flu pandemic, Harris County began planning for the construction of Harris County Non Congregate Medical Shelter (NCMS) last March to relieve pressure on the hospital system by COVID-19 patients. Activation is not intended at this time.

Because Harris County (Houston) commissioners are fully aware of what has occurred in other areas when hospitals are overrun with people infected by the flu, on April 7 they voted to spend up to $60 million to build emergency medical shelters. The county is anticipating that the federal government will reimburse the costs.

An NCMS has already been established in the Orange Lot at NRG Park, part of the NRG Stadium complex, that includes the Astrodome.

Garner is providing logistical and operational support to facility construction, mobilization of medical staff, and development of policies for the facilities, with medical operations to be under the direction and control of Harris County Public Health.

Hand-held drills were also used to drill holes so that structures could be anchored to the parking lot floor.

Sunbelt appreciated the opportunity to participate in the project.

"Thanks to our years of experience assisting emergency response efforts, we were able to respond to Garner Environmental Services' request immediately, supplying the needed equipment quickly and safely," said Jason Olenik, Regional Manager Western Gulf Coast Power & HVACwith Sunbelt Rentals. "Whether it's our equipment that helps construct the facility, the temporary generators to power the facilities, or our temporary HVAC equipment, we are proud to play a role in supporting frontline health care workers and helping to protect our community.

"Sunbelt Rentals delivered 1,401 total pieces of equipment within a five-day period," he added. "Installation started on a Wednesday and had to be ready by Sunday for an inspection by the city. It took Sunbelt more than 850 labor hours for its part in assembling the NCMS."

An NCMS, which can quickly be constructed, is a temporary facility designed to address medical needs and between April 5 and 9, Garner's subcontractors brought in a team of 70 construction workers and more than 57 truckloads of supplies to assemble the outdoor facility.

"[We] can't build it indoors because we're still cleaning up for the rodeo," Harris County Judge Lina Hidalgotold the media. "That would be a dangerous situation for anybody with respiratory illness to be around all those materials that are necessary for the rodeo, so it's been done sort of outside."

The NCMS consists of four medical tents (metal clad structures) – one administrative tent, one pharmacy tent and two trailers to support mental wellness and patient discharge. All the units are climate controlled, connected to the electrical grid, and have access to potable water. Equipment for decontamination of equipment and personnel and waste management have been put in place. It will have 250 beds initially with a capacity of 2000 beds if needed.

"We're building the facilities before they are needed and we hope that they will never have to be activated," said Mac McClendon, Director of the Harris County Office of Public Health Preparedness and Response "Last Friday (April 10) more than 70 medical personnel completed an operational orientation and began staffing the shelter. The NCMS will initially care for low acuity patients - patients that are still able to walk and talk on their own, as well as having the medical capacity to provide emergency care. The facility is scalable both in size and capability and can provide critical care. All patients will first be referred and transported from local area hospitals if they have exceeded their capacity."

Medical staff successfully completed operational exercises on April 11 as part of a media event that concluded with a press conference. The simulation covered many aspects, including a patient being dropped off and processed, the decontamination of the ambulance and its crew, and a fire drill.

Garner Environmental Services is cognizant of the need for the County to be prepared.

Design is critical to the success of the NCMS.

"We had to design the layout for a hospital flow movement, patients and personnel," said Michael (Mac) McClendon, Incident Commander for this project and Director of the Harris County Office of Public Health Preparedness and Response. "It must have the capability to function as a full capacity hospital in a parking lot. We had to provide the same amenities of a brick and mortar hospital on an uneven floor. The floor was designed to be a car flow and we adapted it to be a patient care floor, so we had to do many adjustments, like changing bathroom locations, staff entrance and emergency exits.

"The design was based to meet the criteria of a facility that functions,: he added, "just like a brick and mortar hospital, within the space constraints available and including all utilities – air-conditioning, plumbing, fire exit standards, etc.."

FMO approval was received on April 14.

Crews started their work on April 5, when the first trucks carrying the materials arrived on-site.

"One of the challenges was obtaining approval from the Fire Marshal's Office (FMO) and ensuring all standards were met at a temporary facility that are normally required in a brick and mortar facility," said Michael (Mac) McClendon, Incident Commander for this project and Director of the Harris County Office of Public Health Preparedness and Response. "We had to adjust the design based on the needs to face the COVID-19 pandemic and ensure that needs were appropriately met."

Other challenges included spacing and the installation of utilities, as well as meeting the requirements of the FMO (basic safety rules and regulations).

"In the end, everything went according to plan with many adjustments and changes from the original plan," said McClendon. "We coordinated the work through a unified command structure."

The crews had layout schematics to guide them as each segment of the NCMS was installed.

"A multitude of flexibility and coordination was needed at every level to ensure successful completion of the project," said McLendon. "Once that was achieved, simultaneous operations could begin. It took the efforts of many people working together to make it happen."

Daily briefings were held twice a day, and there was plenty of space to store the materials to be installed, which were labeled to ensure everything fit into place.

A good rhythm was developed early on.

"Our team was very cooperative despite the challenges encountered," said McClendon. "Teamwork was essential every step of the way until completed."

The construction plan was straightforward. As the temporary floor was placed on the parking lot, beams to support the metal roof were drilled into place. The walls of the structures were then placed, followed by the roof.

As various structures were erected, utilities were hooked up to the NCMS.

GES brought in local subcontractors to assist with the project.