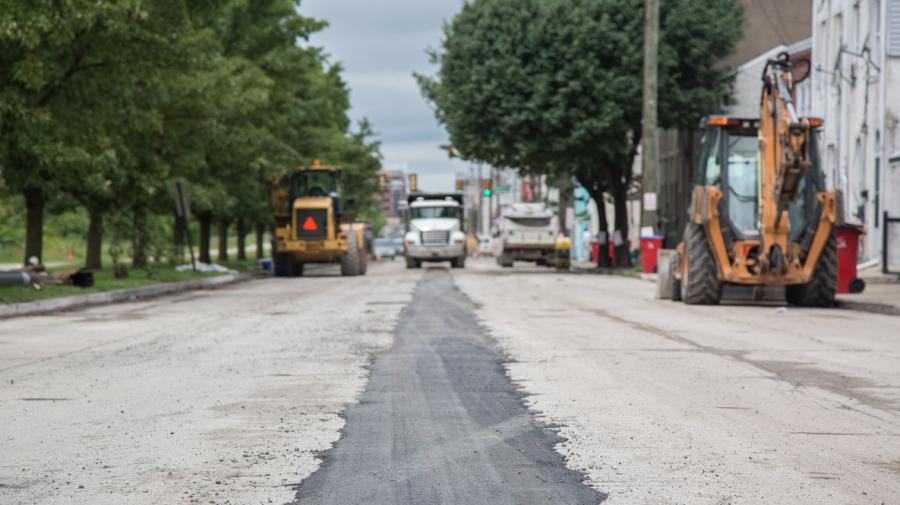 PECO is undertaking the much needed, but also very expensive updating and repairing gas and utility lines throughout the city. (Emily Cohen/for The Inquirer photo)

A hydraulic excavator clawed a 7-foot-deep trench down the center of Lafayette Street in Norristown the other day, creating a void where Rich Brunner's crew was busy installing a 12-inch-diameter natural-gas main.

“I've been in the industry for 16 years, and I've never seen this much work,” said Brunner, a supervisor for Utility Line Services Inc. of Conshohocken, which is building the 7,000-foot-long underground gas main for Peco.

These are good times for utility contractors. Peco and other gas utilities are under pressure from state and federal officials to retire aging, potentially unsafe, pipes, such as the brittle cast-iron main under Lafayette Street. Regulators have allowed utilities to assess surcharges to pay for accelerated improvement plans, setting a course of intensified construction for decades to come.

“They have mapped out how much work they have to do for the next 30 years,” said Austin Meehan, president of Utility Line Services, one of six contractors that signed five-year contracts with Peco. “The outlook is very good.”

But Peco says higher contractor bids have helped push up the cost of an average gas main from $1 million to $1.5 million a mile. The market for qualified pipe mechanics has tightened, too, and utilities and labor unions are scrambling to train new apprentices.

“Everybody is in competition to get the same contractors,” said Joseph Swope, a spokesman for UGI Utilities, which operates in Eastern and northern Pennsylvania.

This construction boom also has triggered a form of trench warfare between utilities and local governments. Peco and other companies say cash-strapped municipalities are boosting the prices for permits to dig up streets. Some have initiated new fees to recover costs for managing traffic disruptions, roadway degradation, and residents' complaints related to the work.

Philadelphia is revising its regulations to require utilities to mill and resurface traffic lanes when they dig trenches. (Smaller repairs still need only a patch of pavement.) The new rules, which aim to match PennDot road standards, should be in place by the 2018 construction season, said Patrick O'Donnell, manager of the city's right-of-way unit.

“It's our assets that are out there, and it's our responsibility to maintain those assets,” O'Donnell said. “So we're going to expect restoration to occur according to our standards.”

Some suggest that municipalities are taking the opportunity to shift street-resurfacing costs. “The townships are trying to get their road programs paid for through utility work,” said Meehan, the contractor.

Columbia Gas, which operates in the western part of the state, last year sought to boost its infrastructure surcharge, partly blaming municipalities. “Permit fees and restoration requirements can be seen as a source of easy revenue for some municipalities and can create a burden on all ratepayers through rising construction costs,” Columbia said in its filing with the state Public Utility Commission, which turned down its request.

Last month, the PUC approved Peco's request to increase its annual budget for gas-main replacements from $61 million to $92 million, just to keep pace with its target of replacing most at-risk pipes in 20 years. The budget increase will not immediately affect customer rates, though Peco may eventually seek to recover its investment with higher rates.

PUC 's vice chairman, Andrew Place, suggested that Peco consult with other utilities about ways to negotiate better terms with municipalities. He warned that the commission would not allow the utility to charge ratepayers for imprudent construction costs, and “it is not prudent to unreasonably shift road-upkeep costs from municipalities to natural-gas customers.”

UGI's gas utility and PPL Electric Utilities sued the City of Lancaster over new fees it enacted in 2013. In 2015, Commonwealth Court threw out some of that city's rules, saying Lancaster was illegally usurping a regulatory role that state law exclusively assigns to the PUC. But the court upheld Lancaster's imposition of fees for maintenance of the public rights-of-way, though the fees must be reasonable and cannot constitute a tax. Lancaster and the utilities are still sorting out what constitutes a reasonable fee.

Lancaster spends about $500,000 a year to manage utility work, and it's only fair that utilities and not taxpayers should cover the costs, said Charlotte Katzenmoyer, the city's public-works director. “There isn't a day that goes by that our engineering staff is not fielding calls, or going out to check unsafe practices or improper lane closures related to utility work,” she said.

“When residents see something happening on their block, or they're stuck in traffic because of a lane closure, they don't call the utilities,” she said. “They call the city.”

Peco said it was making an effort to better coordinate gas-main projects with local governments. The $4.7 million Lafayette Street gas-main project, set to conclude early next year, will require only a patched trench because it was scheduled to occur before Montgomery County started its own street-reconstruction project.

“The Lafayette Street project is a great example of how we work closely with municipalities and townships,” Peco's Armstrong said.

“We're finding that our contractors are providing competitive pricing because of an increase in the amount of work, more consistent commitments, and improvements in the bidding process,” she said.

“Every gas utility in the Northeast is in an accelerated pipe-replacement program at the same time, and you also have a lot of gas producers expanding the infrastructure to get Marcellus Shale gas to market,” UGI Utilities' Swope said.

Contractors say it's a chore to recruit new employees who can pass drug tests and want to work outdoors. “Young people are not going into the business, and it's hard for me to understand why, because the benefits and pay right now are good,” said Meehan. Union laborers at his company earn $50,000 to $60,000 a year, he said.

“We're close to full employment,” said Boyer, whose 6,000 members do much of the underground work for private contractors. “It's a good problem to have.”

Looming on the horizon, though, is President Trump's promised $1 trillion infrastructure program, which could increase demand for specialized labor and contractors still more.

Even if the spending is concentrated on bridges and highways, utilities will need to be relocated or replaced.

“That,” Meehan said, “would add to the workload for utility contractors.”