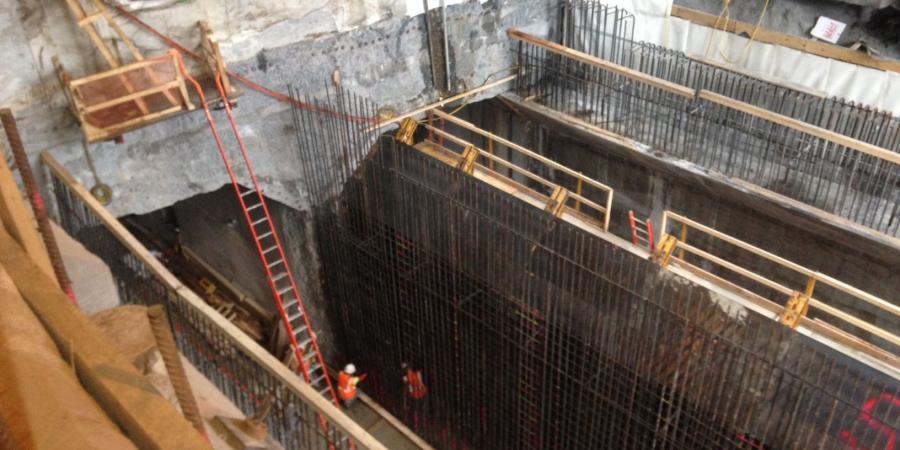 Tutor Perini photo Trustees of the Gateway Program Development Corporation commended the Port Authority of New York and New Jersey for agreeing to fund $12.5 million of work with Amtrak to relocate utilities from the path of Section 3 of the Hudson Yards Concrete Casing project.

Trustees of the Gateway Program Development Corporation (GDC) on May 18 commended the Port Authority of New York and New Jersey for agreeing to fund $12.5 million of work with Amtrak to relocate utilities from the path of Section 3 of the Hudson Yards Concrete Casing project.

Planned in collaboration with Long Island Rail Road (LIRR) and The Related Companies, the utility relocation project involving LIRR's Emergency Services Building is a critical path activity that paves for the way for construction of the third and final section of the concrete casing. The concrete casing preserves the right of way for the future tunnel under the rapidly advancing Hudson Yards development on Manhattan's west side.

“The GDC appreciates the leadership of the Port Authority of New York and New Jersey in helping to advance this important work,” said Steven M. Cohen, GDC board chairman. “This is another example of the strong regional partnership moving the ball forward on the most urgent infrastructure project in America. We cannot continue putting 10 percent of America's Gross Domestic Product at risk by relying so heavily on 19th century technology.”

To protect the future rail right-of-way through the Hudson Yards, two sections of the concrete casing have been built underground in the block bordered by 10th and 11th Avenues and 30th and 33rd Streets. Construction of the first 800-ft. section (between 10th and 11th Avenues) began in August 2013 and was completed about a year later. The second section extended the project west another 105 ft. under the 11th Avenue viaduct in Manhattan and was completed in 2016.

“The GDC is focused entirely on Phase I of the Gateway Program right now — including the Hudson Yards connection to a new tunnel — which will eliminate single points of failure that jeopardize 10 percent of America's GDP,” said John D. Porcari, interim executive director of the Gateway Development Corp. “I commend the Port Authority and Amtrak for their collaboration in identifying and committing this funding. Finishing the Hudson Yards Concrete Casing is an essential step toward construction of a new tunnel.”

The Gateway Program is the most urgent infrastructure program in the country — a comprehensive rail investment program that will improve commuter and intercity services, add needed resiliency and create new capacity for the busiest section of the Northeast Corridor (NEC).

The NEC is the most heavily used passenger rail line in the country hosting more than 2,200 train movements and 800,000 passenger trips daily. The Gateway Program Development Corporation is a New Jersey not-for-profit entity with board members appointed by Amtrak and the states of New York and New Jersey. It was incorporated in 2016 to oversee and effectuate the Gateway Program in coordination with federal and local partner agencies.