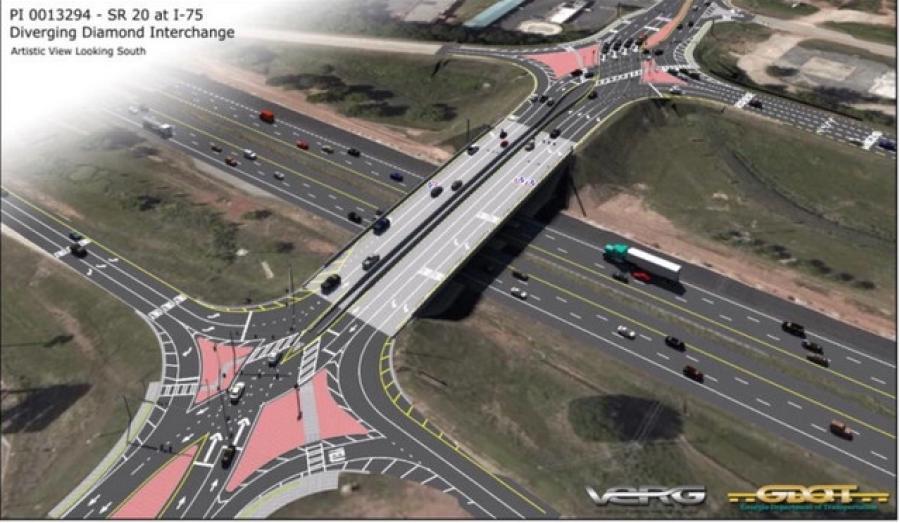 A project first proposed in 2015 is going to construction after the Georgia Department of Transportation (GDOT) awarded a contract July 31 for the installation of a diverging diamond interchange (DDI) at I-75 and State Route 20 in the Henry County town of McDonough. The site is located at I-75's Exit 218 south of Atlanta.

CMES Inc. of Norcross, Ga., was awarded the lowest bid in the amount of $5,215,335.76. The enterprise is funded through federal transportation dollars.

The McDonough location is the second installation of the innovative DDI design in south metro Atlanta following a rebuild of the interchange at I-285 at Camp Creek Parkway.

The design was first implemented in Georgia in 2012 and fewer than 10 currently are operational statewide. Other examples can be found at Ashford-Dunwoody in Perimeter (the first DDI in Georgia, opened in 2012), I-75 at Windy Hill Road near the Atlanta Braves stadium, and I-85 at Jimmy Carter Blvd in Gwinnett County.

Diverging diamonds feature a crossover design where drivers temporarily drive on the left-hand side of the roadway when crossing the bridge. This allows motorists entering or exiting the interstate to turn left without crossing in front of opposing traffic. The design improves traffic operations by an estimated 30 to 40 percent — reducing motorist delays — and lowers crash rates.

The new interchange on McDonough's southwest edge will feature additional pavement markings, road signs, and directional arrows to help guide motorists through the exit. When complete, the bridge will feature six lanes with a barrier-protected 10-ft. wide center sidewalk for pedestrians and cyclists. The six lanes will include two through lanes and one left-hand turn lane in each direction.

Construction will require one weekend, possibly a second, where the bridge is closed. When this occurs, motorists will be able to enter or exit the interstate, but not cross over the bridge. These weekends will happen during later phases of construction and the dates will be communicated in advance when scheduled, according to the GDOT.

Following the DDI project, a widening of SR 20 from I-75 to Phillips Drive is scheduled to let for construction in November 2021. The work will expand the road from two to four travel lanes and build a new multilane roundabout at the intersection of SR 20 and McDonough Parkway.