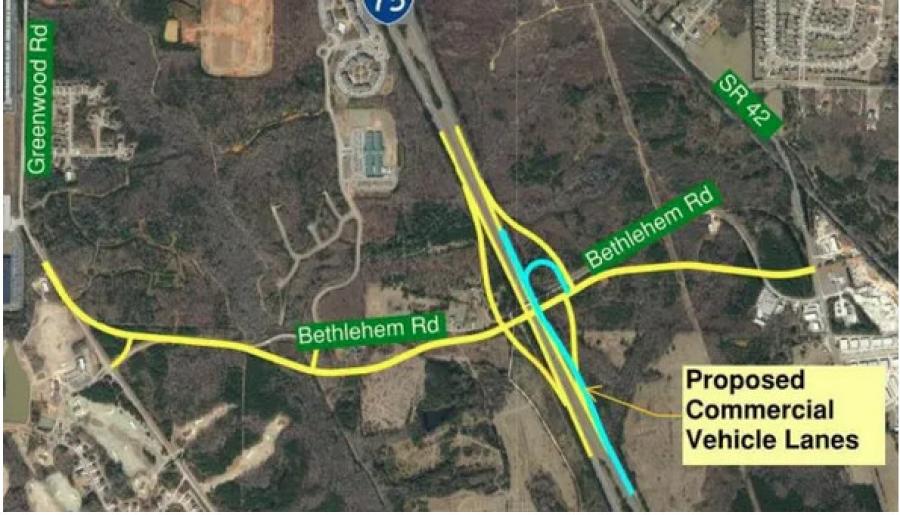 In an update to Henry County officials on Feb. 2, Georgia Department of Transportation (GDOT) leadership shared with the county a new timeline for the proposed Interstate 75/Bethlehem Road interchange south of McDonough.

The state is planning to start construction on the new exit in either late 2023 or early 2024, with an estimated completion date of 2027.

In late 2017, an engineering firm recommended to Henry County commissioners that the Bethlehem Road area of Locust Grove was the most appropriate location for a new I-75 interchange in the county.

The report was sanctioned by the Board of Commissioners in August 2016 to determine the best place for an interchange between I-75's Exit 212, which is a gateway to Bill Gardner Parkway in Locust Grove, and Exit 216, an access point to GA Highway 155 in McDonough.

The two areas are considered Henry County's top truck traffic routes due to the proximity to warehouses and other industrial areas. The new interchange is expected to provide significant relief from truck congestion as well as a faster and safer passageway for truck and industrial traffic moving between Atlanta and Macon

The GDOT also stated that it is working with the Atlanta Regional Commission (ARC) to program an approximately $50 million contribution to construct the interchange. The state plans to fund the contribution in Fiscal Year 2024.

Because of the dollar amount, ARC can only program the contribution through a Transportation Improvement Program (TIP) amendment. ARC currently is accepting public comment on an amendment — including $14 million in new federal funds for Henry County. The Bethlehem Road funds are expected in the next amendment later this year.

The county funding is available in SPLOST IV, an acronym for Special Purpose Local Option Sales Tax. SPLOST is a financing method for funding capital outlay projects in Georgia. Through it, any of the state's counties have the option to levy a one percent sales tax for the purpose of funding the building of parks, schools, roads and other public facilities.

Henry County has $5.26 million remaining in the project account. In addition to the county's share, the city of Locust Grove is contributing another $1 million.

In exchange for Henry County's contribution, GDOT will award a design-build team for the project. By utilizing the design-build process, it allows the state transportation agency to accelerate the project delivery. The consultant currently on board will assist the GDOT in completing approximately 30 percent of the design before the GDOT awards a second firm both the remainder of the design and construction in one contract.