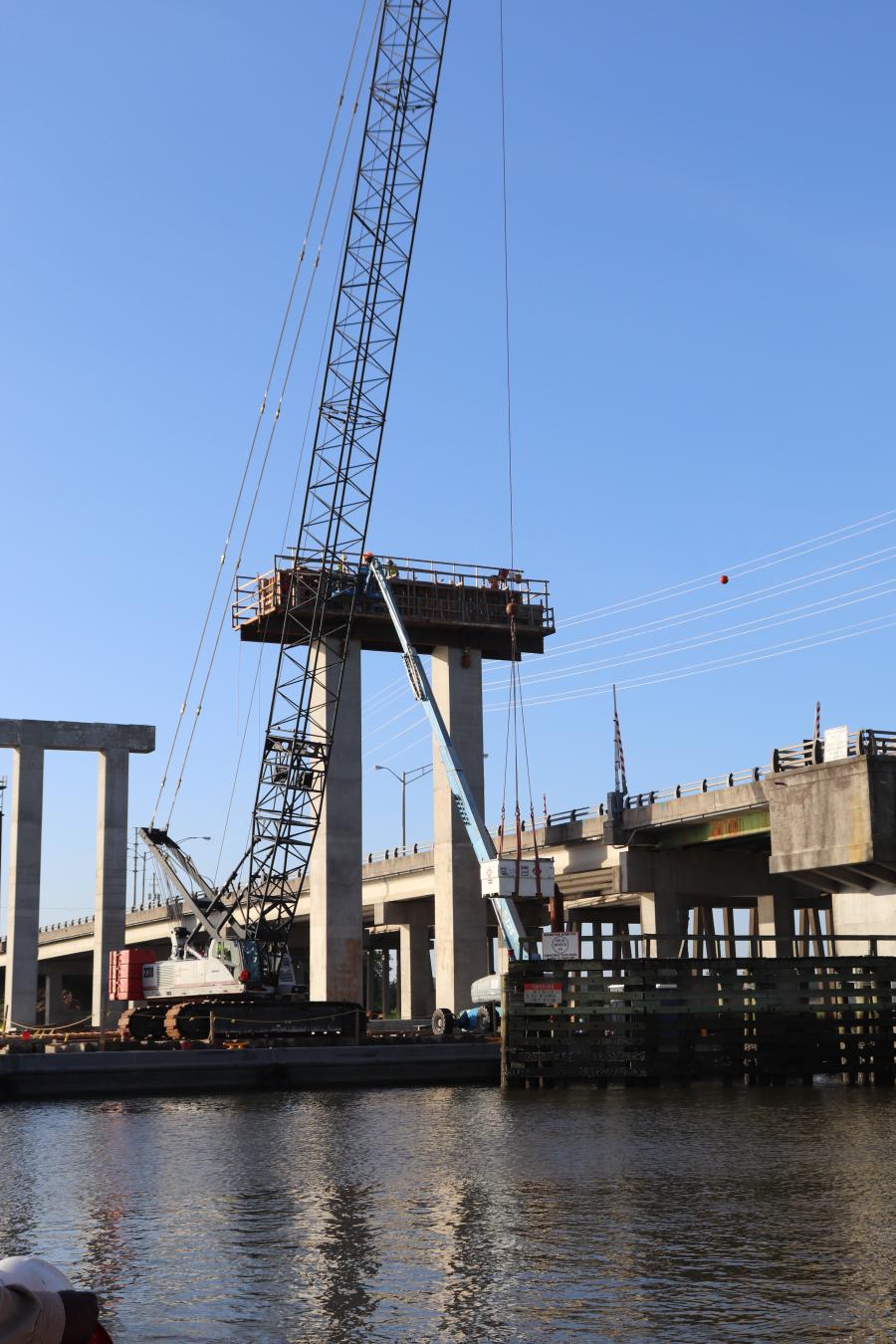 The Georgia Department of Transportation is investing $58.9 million to demolish the two Causton Bluff Bridges built in 1963 over the Wilmington River along Islands Expressway in Chatham County.

The Georgia Department of Transportation (GDOT) is investing $58.9 million to demolish the two Causton Bluff Bridges built in 1963 over the Wilmington River (Atlantic Intercoastal Waterway) along Islands Expressway (CR 787) in Chatham County.

The new bridges to take their place tower 90 ft. into the Savannah skyline and are being built by Florida's Prince Contracting LLC. The work started in July 2018 and is scheduled for completion by November 2021. The project also calls for roadwork: the intersection at Woodhill Road and Causton Harbor Drive is being reconstructed to meet current GDOT design guidelines, as will the intersection with the entrance to the Frank W. Spencer boat ramp park. 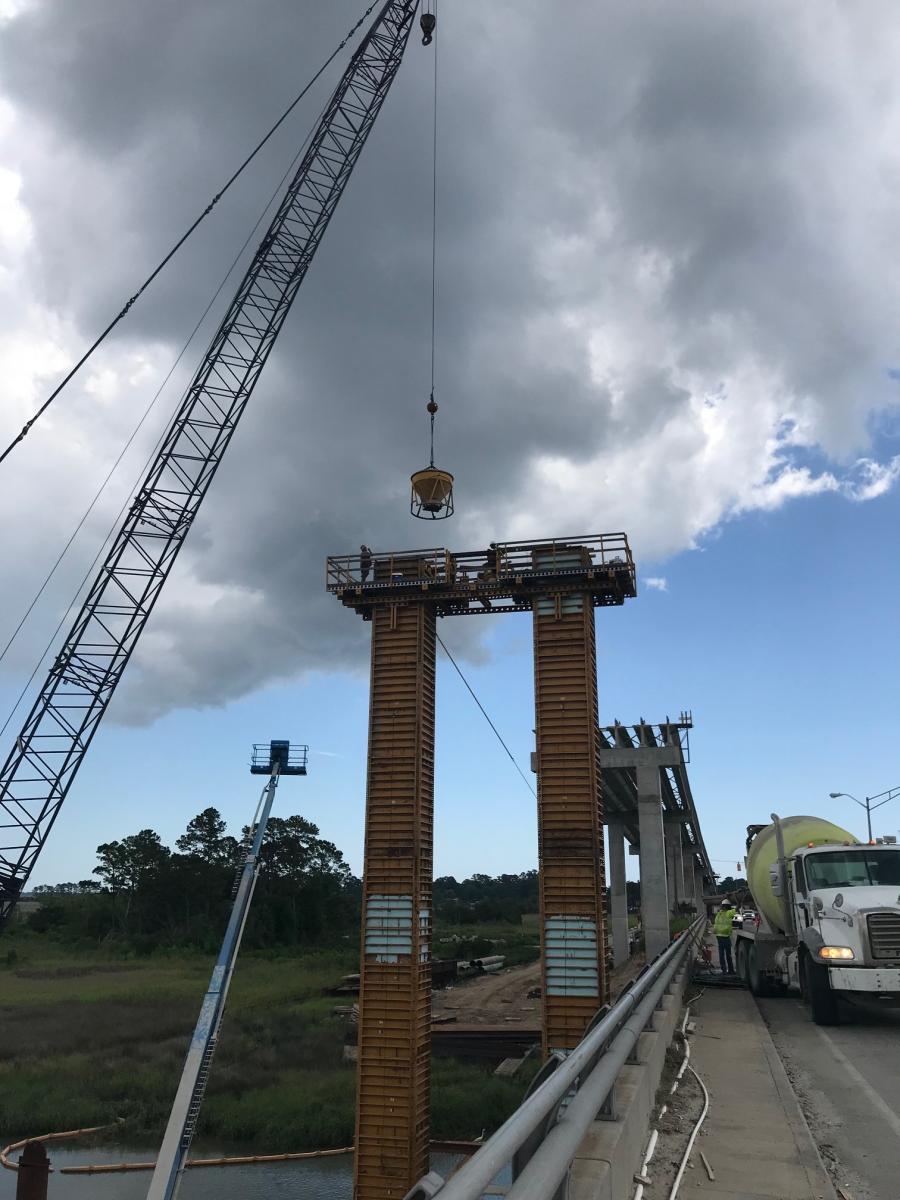 "Woodhill and Causton Harbor [are being] reconstructed to tie with the new slightly elevated grade of Islands Expressway at the intersection," GDOT stated on the project's web page. "The concrete pipe culverts west of Causton Harbor/Woodhill intersection will be extended to accommodate the widening of the roadway at that location."

GDOT considers the bridges to be "functionally obsolete," and planning for their replacement began as early as 2011.

"The removal of the bridges eliminates the operation costs and reduces the maintenance and required capital improvements, which are anticipated to be less with the new fixed span structures," said Bryan Czech, GDOT's District Construction Engineer. "The bridges are opened/closed approximately 4,000 times per year. The frequent openings cause traffic delays, which results in an inconvenience to the traveling public. The proposed project would increase the vertical clearance of the crossing and eliminate the traffic delay and associated lost travel time due to frequent bridge openings."

The maintenance and operation of the bridges are a substantial burden to Chatham County, which is solely responsible for the costs because CR 787 is a county route. GDOT estimates that the annual operation and routine maintenance costs represent approximately 60 percent of the county's annual bridge budget, which includes having three full-time employees to man them 24 hours per day, year-round. Annual maintenance costs do not include capital expenditures such as the rehabilitation of electrical systems for span motors, lock motors, navigation lights, traffic lights and a console (required every 20 years); steam cleaning and pressure washing (required every five years); replacement of bridge grating; rehabilitating locks and grease fittings (required every five years); and painting (required every 20 years).

The bridges will be 38 ft. wide between the side barriers, providing for two 12-foot lanes in each direction with a 10-foot wide outside shoulder and a 4-foot-wide inside shoulder. The roadway approaches will have two 12-foot-wide lanes in each direction separated by a 44-foot-wide median transitioning to a 30-foot-wide median near each end of the project to match the existing roadway. The new roadway will provide 10-foot-wide outside shoulders with 6.5-foot paved paths for pedestrians and cyclists, and 6-foot wide graded inside shoulders with 2 ft. paved adjacent to the inside travel lanes.

Ensuring that vessels can pass underneath the bridges is crucial to the project.

"The minimum vertical clearance under the new bridges will be approximately 65 ft. above mean high water," the GDOT project web page stated. "The horizontal clearance in the channel below the bridge will be increased from its current 100 ft. in width to 195 ft. in width between the proposed new fender system. The existing horizontal clearance is 100 ft. between the existing bridge piers. Nonetheless, barge traffic still has difficulty maneuvering through the crossing, and there have been several collisions with the fender system. Not only does this represent a safety issue, the collisions also add to the maintenance and operation costs of the existing bridge. The fixed span bridges [will] provide increased horizontal clearance for maritime traffic under the bridge, which would enhance the safety of the navigational waterway and the Islands Expressway." 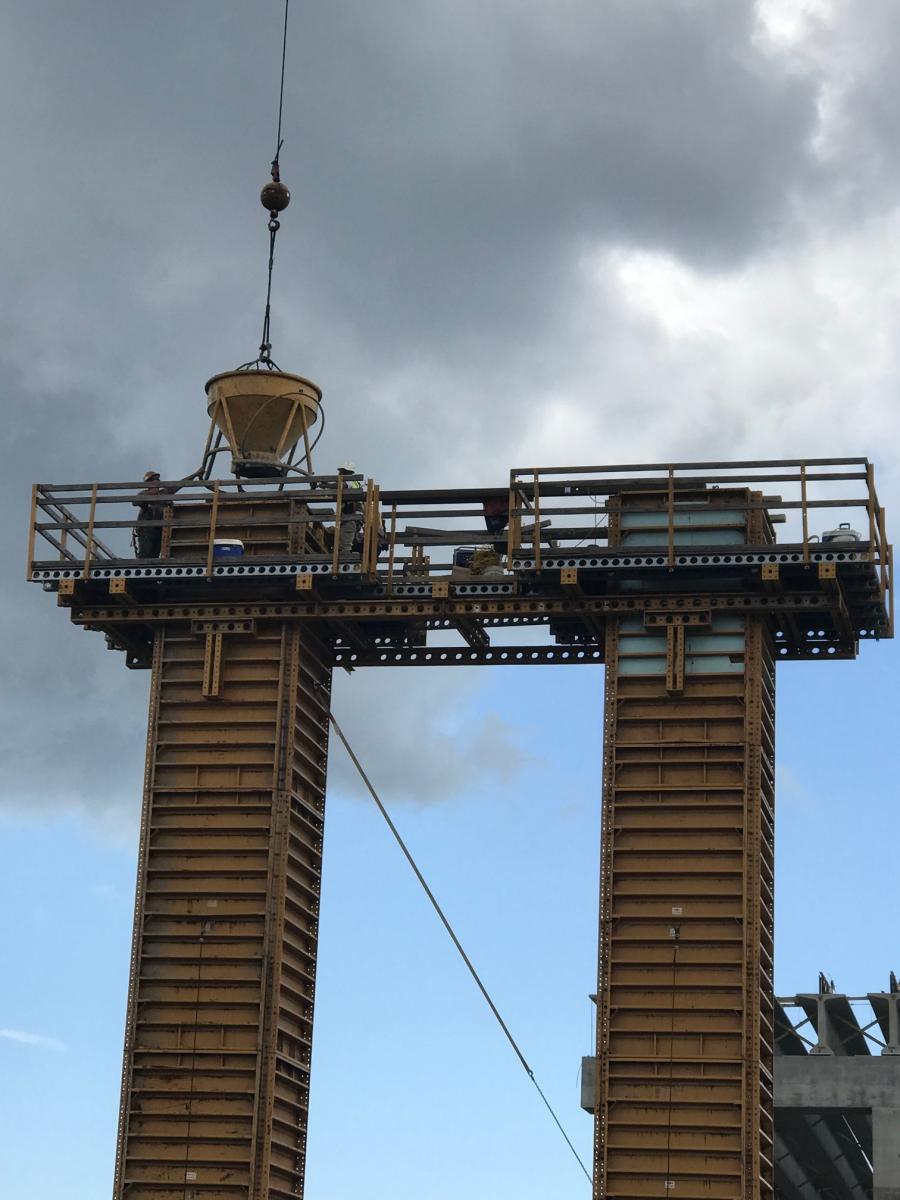 The bridge was designed in-house by GDOT.

"The haunch beams being installed on the bridges are 11 ft. tall and span the main channel," Czech stated. "They are very long, very heavy and very expensive. Installing them and keeping them in place until bridge decks are poured is the challenge."

Thus far, Prince has completed the following: the entire substructure for Bridge LT (the left bridge), which included pile driving of 24 in. and 30 in. The 2019 construction season will focus on the temporary shoring tower to erect the continuous spans — three to five, MSE wall construction and bridge deck paving.

"One of the main challenges faced thus far is the marine construction part of the job," explained Alex Bussaus, Prince's project engineer. "With tidal changes reaching almost a foot, it made it very difficult to drive pile and pour the footers. Crews had to come in during odd times of the day just to be able to work for six to eight hours in low tide conditions. During the pile driving and footer installation in the water, we had crews working day and night because of the tidal conditions. We have a field office trailer located at the boat ramp. Every morning the guys get together to meet before their shifts start to talk about safety, and the work being performed that day. We have limited space on-site for material but have a location off site that we currently use."

This is Bussaus's first marine project and for Prince, one of its biggest marine assignments ever. Project Superintendent Chris Phillips, with 20 plus years experience in the industry, and Area Manager David Hurley, who recently started working for Prince, are part of the management team and helping to come up with solutions to the many challenges.

"The tides made it difficult to work and there were times where we couldn't pour some of the substructure for a week or two," Bussaus said. "Currently, we are erecting the girders over the water and for the end beams we can only erect during the high tides because of the barge placement. Another challenge was constructing the MSE walls over marsh conditions on the east approach. We built about 40 percent of the wall when we observed substantial rotational settlement due to the load capacity of the marsh soils. After monitoring the wall for about a month, it was determined the current soil conditions could not hold the designed MSE wall load. With several solutions proposed by GDOT, it was decided to extend both bridges an additional 3 spans which eliminated all the MSE wall on the east approach."

Due to the soil issues that affected the construction of the MSE wall, it was decided following a meeting in early July to extend the length of the bridges. The wall, near the boat ramp, had been sinking and there were rotational issues. Divers were deployed at the start of the project to do an initial underwater survey of the existing bridges, and will be brought back in at the end to do another survey when the new bridges are completed.

Barnett Southern Corporation, a subcontractor hired to do the grading, is currently on-site. With a construction boom ongoing in Georgia, Bussaus noted that it has been a struggle to find some more people to help with the work. 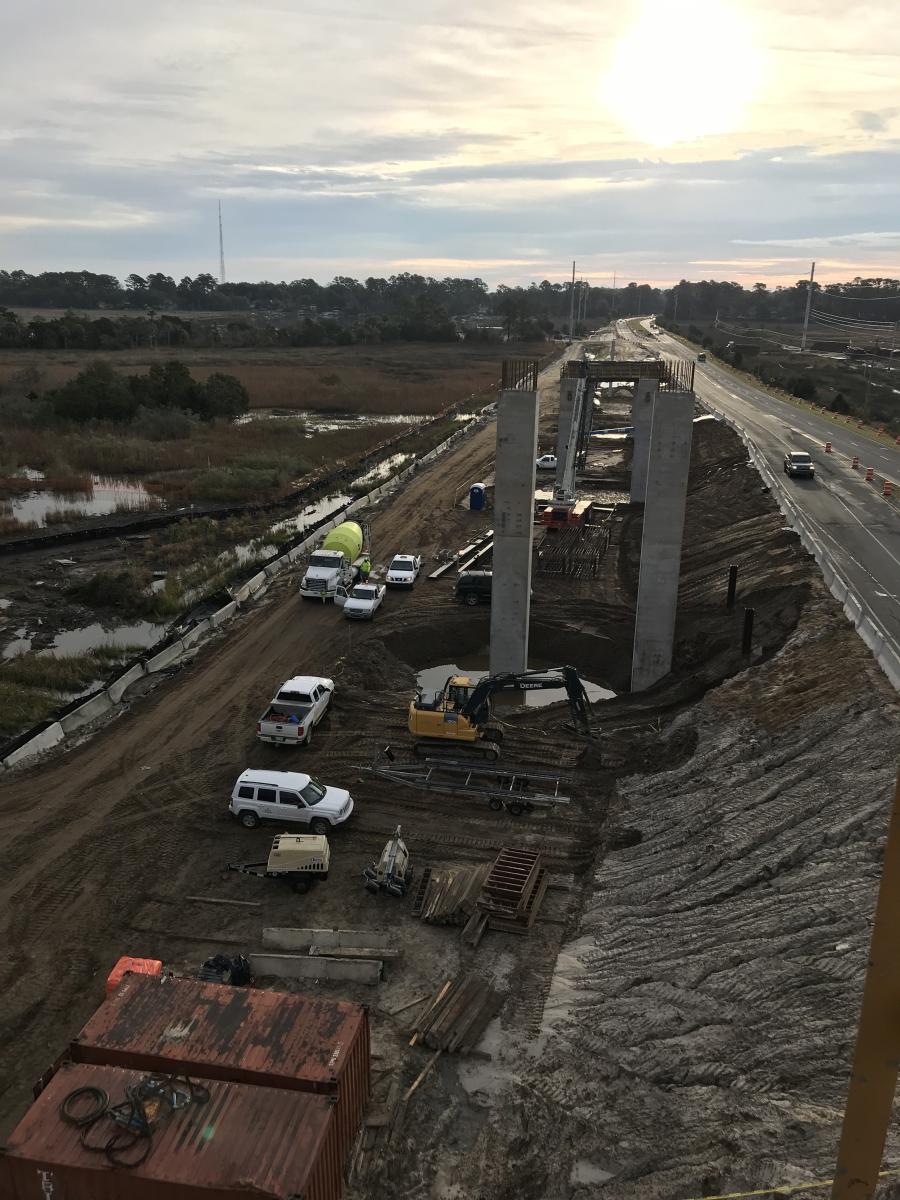 Prefabricated parts are being delivered as needed, with 90 percent of the beams for both bridges having been cast by Standard Concrete Products. Once the left bridge is completed, traffic will be switched to it from the old bridges, which will then undergo demolition operations. Work on the right bridge is expected to start in late 2020 as the demolition plan is still being finalized.

"The plan of attack from the start was to use divers to cut the substructure and then remove some of the piles," Bussaus explained. "It's going to be very complicated and we can't have any debris fall into the water. And we have the manatee season from December to the end of April, which means that you can't do any work during that time."

Some of the road work has been done, but the bulk of it will be initiated towards the end to reconfigure the approach lanes.

There are between 40 and 50 construction workers currently on-site. Other subcontractors that will be on the project include Barnett Southern, Moses Grass, Peek Pavement Marking, Rodman of Florida and US Wick. The amount of new construction materials that will be used is still being tabulated. The demolition of the existing bridges, which should take four months to accomplish, will yield a large amount of recyclable material.

For the girder erection over the water, Prince is using two Manitowoc 2250 cranes mounted on barges from Mobro Marine and S.J. Hamill. Barnett Southern is hauling the girders by barge from the Standard Concrete plant, which is approximately two miles away, and it has two cranes on-site — a Link-Belt 218 and a Link-Belt 238. In terms of manlifts, Prince has 85 ft. and 125 ft. manlifts from Synergy, as well some owned by Prince. Most of Barnett's equipment is company owned.

Mechanics are brought in as needed, with some repairs being done by the operators, and crane operators have to fill out a daily safety report on their equipment. Problems are immediately reported to supervisors.

Prince purchases and rents its equipment from the Georgia branches of United Rentals, Synergy Equipment and H&E Equipment Services.

"The dealerships help out by supplying smaller equipment and tools that we need, and United Rentals will be supplying our jacks for the girder operations for the continuous span," Bussaus said. "We speak with our dealerships on an almost daily basis, as is the case with our material suppliers. There's always fires to be put out. This is Prince's first recent job in Georgia and the company wants to build a foundation here."

"I absolutely love it," he said. "There are not many bridges like this — over a half mile long with a continuous span and post-tensioning. It's something special. We have hard working and upbeat people that want to do a good job." CEG