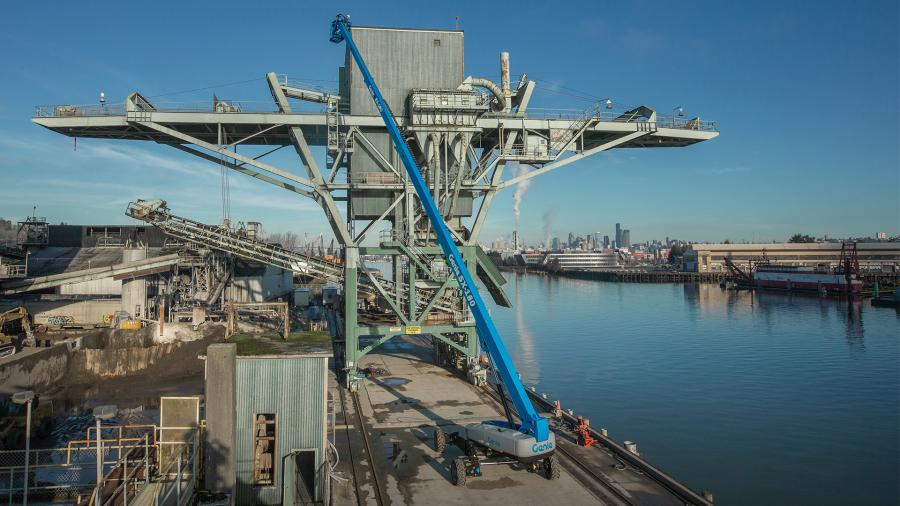 Marking half a century of serving aerial markets around the world, Genie, the Aerial Work Platforms (AWP) segment of Terex Corporation, celebrates its milestone anniversary this year with customers worldwide.

Marking half a century of serving aerial markets around the world, Genie, the Aerial Work Platforms (AWP) segment of Terex Corporation, celebrates its milestone anniversary this year with customers worldwide. Genie has achieved its five-decade legacy of “Building the Future” through industry leadership, customer input and innovation.

Genie Industries was founded in 1966 when Bud Bushnell bought the manufacturing rights to a material lift that operated on compressed air. Customers seemed to be impressed with the “magic in the bottle” that used to raise and lower the hoist — hence, the “Genie” name was born. With growing demand for material lifts and aerial work platforms, products such as man-lifts, stick booms, articulated booms, light towers and telehandlers have been added to the Genie® product line. Today, Genie equipment is used in a variety of industries and applications worldwide, including rental, aviation, construction, entertainment, government and military, industrial, as well as warehouse and retail.

“From the very beginning, Genie has been working to develop products that solve our customers' worksite challenges — and that process never ends,” says Brad Allen, Vice President of Genie Marketing, Product Management and Engineering. “Our team of product managers and engineers uses customers' inputs to design new products, featuring the latest technology to meet changing needs. We manufacture our products to stringent standards that help increase quality, lower costs and provide a high rental return on invested capital (rROIC).”

In the last 50 years, Genie has gone above and beyond in its product development efforts, focusing on what customers need to be successful in their industries and applications — Genie innovations are changing the market and setting the industry standard for quality, reliability and safety in aerial lift equipment. Over the last five decades, Genie has become known for developing innovative products that make work at height more productive, including:

• Push-around Lifts: Genie pioneered the first hydraulic material lifts, featuring a unique interlocking mast design. These evolved to AWP push-arounds that quickly became an industry favorite, thanks to their ground entry for operators and portability on jobsites.

• Z™-Boom Lift Category: Genie introduced the articulating Z-boom in 1985 with the Z-30/20 model; a product that launched the company into the rental segment. These lifts gained incredible popularity due to their unique “up-and-over” capabilities to navigate obstacles at height.

• Compact Telehandlers: Genie popularized the industry's first compact telehandler, the Telelift 2306, in applications beyond its initial agricultural design, setting industry benchmarks for high productivity and performance, maneuverability and easy operation. The Telelift 2306 was the predecessor model to today's well-known Genie GTH™-5519 model in North America and the GTH-2506 unit in Europe.

• 40-ft Scissors: Genie offers the most full-drive height models in the industry, including the GS™-4069 and GS-4047 models. These machines are designed for mid-height applications, which enabled the brand to enter a new class category globally. Operators can safely position and reposition a Genie scissor lift fully extended, saving time on the job.

• Genie SX-180 Boom Lift: Genie was the first to market with the world's tallest, self-propelled boom. The brand's highest reaching self-propelled boom was built to safely and quickly lift operators up 18 stories. Its compact design allows users to easily transport it to and from jobsites.

• X-Chassis: This expanding axle design revolutionized the mechanism for extending and retracting the axles on Genie booms to and from the stowed position. The Genie X-Chassis™ feature combines outstanding stability with the flexibility for easy transport.

Genie also set new standards in the industry for many products and technologies that have become widely adopted in the last 50 years, including dual parallelogram, rotating, fully articulating and extending jibs, true crab steering and the TraX track drive system.

• The market's first rotating jib was pioneered on the Genie Z-30/20 boom lift. This feature is still used on several Genie products today.

• Fully articulating jibs were first introduced on early Genie S™-60 telescopic boom models. Before the advent of this feature, jibs were only able to be articulated parallel with the main boom. With the fully articulating feature, operators are able to articulate the jib above the boom and get in, up and behind objects quickly and easy.

• Genie was the first to bring the four-point TraX track drive system to the industry as a way to provide increased terrainability and lower contact pressure for reduced damage to sensitive ground surfaces on aerial products such as the company's Z- and S-booms.

And, according to Allen, the company has no plans to slow down its progress in “Building the Future.” “We've got brand-new ideas being thought of today that we'll be turning into reality within the next two years. We never stop moving forward — we keep taking our customers and their businesses higher. In the next 50 years, we'll continue to reach new heights, fit into new classifications and categories and continue to increase our customers' rROIC,” says Allen.

“From Bud Bushnell's garage to the 4,500 team members serving customers around the world today, Genie is the story of teamwork. Our customers have trusted us and helped us to build and define the aerial industry, as well as creating ways for people to work at height safely. It is through teamwork that we will continue to find new solutions and opportunities to take our customers higher,” says Matt Fearon, President, Genie. “For us, 50 years is just the beginning — the best is yet to come.”