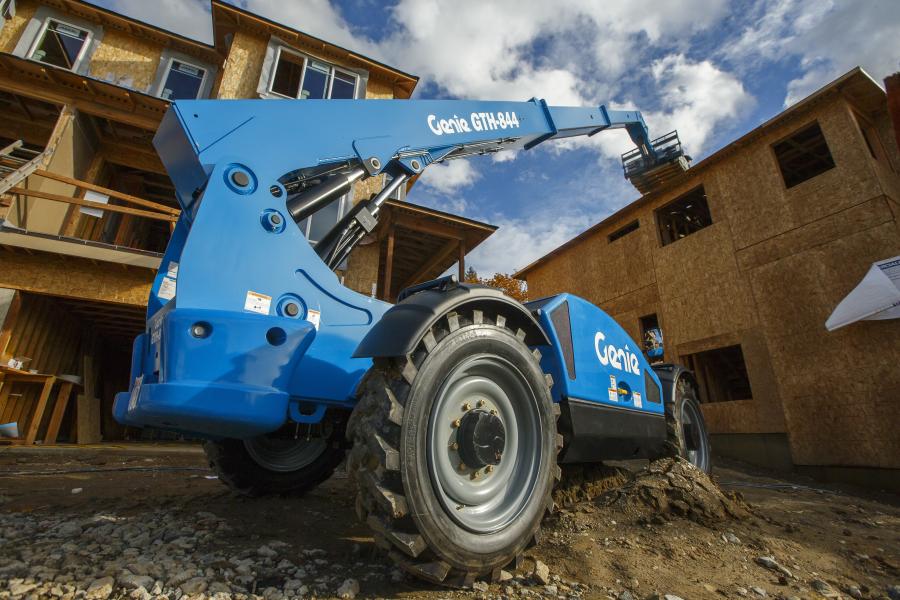 Boasting 287 ft.-lb. (389 Nm), this GTH-844 telehandler is equipped with a high-torque version of the Deutz turbocharged 3.6 L engine that has been optimized for 74-hp performance.

The Genie GTH-844 rough terrain telehandler now comes with a 74-hp (55 kW), Tier IV Final engine option. Boasting 287 ft.-lb. (389 Nm), this new GTH-844 telehandler is equipped with a high-torque version of the Deutz turbocharged 3.6 L engine that has been optimized for 74-hp performance. These features combine to offer similar torque as higher horsepower engine packages with reduced maintenance needs, as there is no regeneration or diesel exhaust fluid (DEF).

“An engine has a big impact on a machine's overall rROIC [rental return on invested capital] so we kept things simple and cost-effective with the updates to our popular GTH-844 telehandler,” said Genie Telehandler Product Manager Anders Mantere. “By optimizing the drivetrain and utilizing the new high-torque, 74-hp engine, the GTH-844 is a less complex machine at a lower price point — offering full-sized performance at the right-sized price.”

“Giving our customers a choice of engines enables them to pick the machine that best matches their fleet needs, at a price point that drives the best rROIC for their bottom line,” said Mantere.

With the engine update to the GTH-844 model, Genie also took the opportunity to update other components, including the axles. This machine now comes standard with Dana axles, which have two gear ratios that are performance matched to each engine size. Also, the GTH-844 telehandler is equipped with new standard features that enhance the customer's experience with the machine. Standard features include a Quick-Attach system, low-profile tires, fenders (set of 4) and lift shackle at boom tip. A storage compartment has been added in the front of the unit to keep rigging equipment from scratching the machine.

An optional rear proximity alarm on the GTH-844 telehandler can be used to supplement the operator's direct and indirect visibility, such as when looking in the path of travel or using the machine's mirrors when maneuvering on the job site. This alarm gives the operator an audible and visual indication of obstacles within the detection range of the sensor when the machine is reversing.

The GTH-844 telehandler continues to be the same popular machine it's always been — an ideal tool for loading and unloading, moving and placing and jobsite preparation and cleanup. It features an 8,000-lb. (3,629 kg) maximum lift capacity, a 43 ft. 10 in. (13.36 m) maximum lift height and a 28 ft. 2 in. (8.59 m) maximum forward reach to get jobs done right the first time. And, there's no stopping this powerful performer: Full-time 4-wheel drive and 4-wheel steering enable operators to traverse easily on hills and in rough terrain. Its proportional frame-leveling chassis with dual cylinders allows operators to pick or place loads up to 10 degrees on side slopes, and its multi-functional, proportional joystick gives operators fast, precise load positioning capabilities.

At 97.5 in. wide (247.7 cm) and 94 in. high (239 cm), this telehandler can fit through tighter doorways and openings and can be transported without a special over-width permit. Combined with this narrow width and an outside turning radius of only 13 ft. 9 in. (4.2 m), the new Dana axles make the unit easier to steer and maneuver around any work site.