NJ TRANSIT is replacing the 113-year-old, 2,920-ft.-long Raritan River Bridge, constructed by the Pennsylvania Steel Company and McCullen and McDermott, as part of its Resilience Program

NJ TRANSIT is replacing the 113-year-old, 2,920-ft.-long Raritan River Bridge, constructed by the Pennsylvania Steel Company and McCullen and McDermott, as part of its Resilience Program, which was initiated following Superstorm Sandy to ensure that its transit systems and infrastructure are stronger and more reliable.

George Harms Construction (GHC) was awarded a $250 million contract for the initial construction phase for the bridge that carries commuter trains on the North Jersey Coast Line.

"We continue to make strategic resiliency investments in our infrastructure to ensure the long-term viability of the transportation system," he said. "The Raritan River Bridge replacement [project] is a great step forward in ensuring our North Jersey Coast Line customers have robust and sustainable rail service that will better withstand the effects of extreme weather, while meeting the current and future transportation needs of our customers for so many decades to come."

The bridge, known as River Draw, sustained significant damage during Superstorm Sandy in late October 2012 and required emergency repairs before being put back in service. The hurricane's waves, through the storm surge, overwashed the bridge and led to it being struck by two large tugboats. The emergency repairs had crews realign the structure to permit low-speed rail service.

"The bridge is at high risk of damage from extreme weather events due to its low vertical profile," said Mariluz Garcia-Diaz, senior public information officer, NJ TRANSIT. "As a result of Superstorm Sandy, the existing bridge became submerged and was severely damaged, resulting in an 18-day outage for both rail service and marine traffic as the bridge was realigned and repaired. 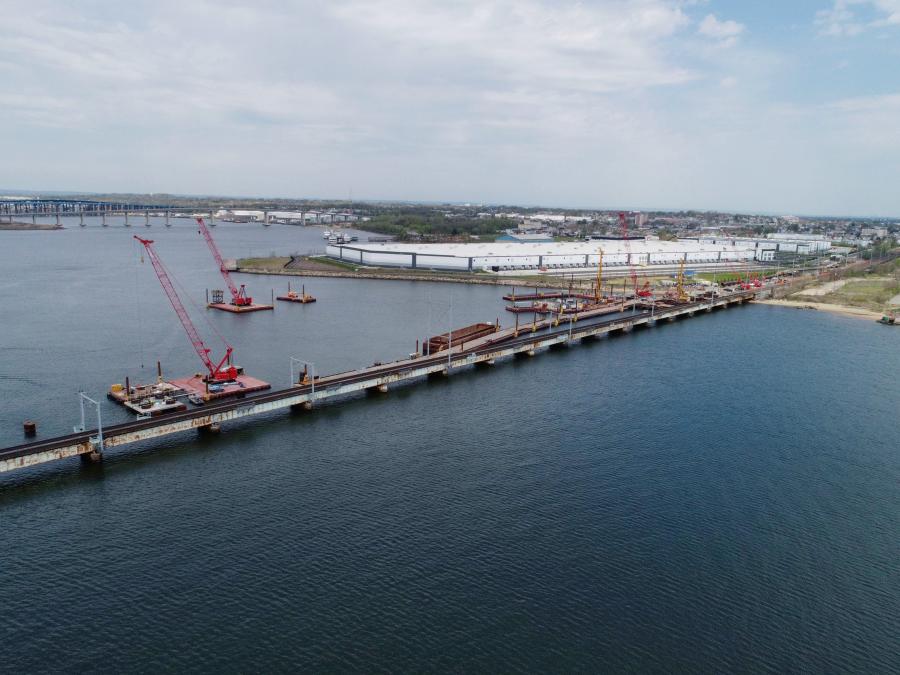 "The bridge has undergone several repair and rehabilitation contracts to keep it in service," she added. "The movable span exhibits frequent operational issues as excessive maintenance costs continue to escalate with the bridge approaching the end of its useful life. In addition to the extreme event risks and recurring maintenance issues, the bridge is subject to frequent marine vessel collisions due to the poor channel geometry at its swing span."

The existing swing bridge connects Perth Amboy and South Amboy in Middlesex County. The structure has 30 spans, with the longest being 331 ft.

The project includes a new off-line replacement of the existing obsolete bridge with a new, two track vertical lift bridge on an improved vertical alignment.

"The new movable structure will provide a more resilient structure with additional vertical clearance above the 100-year flood elevation," said Garcia-Diaz. "The introduction of new mechanical and electrical systems will provide more reliable movable span operations, resulting in reduced maintenance costs from current thresholds. In addition, improved navigation channel geometry at the lift span will significantly reduce risk of vessel collision with the bridge's pier protection systems and associated costly repairs. Once replaced, the bridge will be more reliable for rail operations during both normal weather and extreme events."

George Harms Construction, via its contract, is constructing the bridge approach spans, lift bridge and flanking spans piers, and associated land work. Construction started on Sept. 15, 2020, and the entire project should be completed in 2026.

For the next portion of the replacement project, a general contractor will be responsible for the construction of the lift bridge and flanking spans superstructure, and communications, signal and overhead catenary work. The final element of the project deals with the demolition of the existing bridge once the new one starts carrying rail traffic.

The estimated cost of the three-phase project is $595 million. The financing is based on a 2014 grant awarded by the Federal Transit Administration (FTA) through its Emergency Relief Program for resilience projects in response to Superstorm Sandy. The FTA is providing $446,312,465 in total, of which $247,945,055.49 has been allocated to the first phase of the project.

According to NJ TRANSIT, "the one‐time total economic impact of the Raritan River Bridge Replacement project for the New Jersey economy will be $1 billion including the direct, indirect and induced economic impacts, supporting 5,740 jobs and $352.5 million in earnings according to studies by Rutgers' Center for Advanced Infrastructure and Transportation."

The engineering and design issues associated with the new bridge had to meet several criteria.

"The Raritan River Bridge replacement project is one of NJ TRANSIT's largest ongoing Competitive Resilience projects," said Garcia-Diaz. "The design and engineering challenges that were faced stem from how to best serve the users of NJ TRANSIT's system with respect to future resilience concerns given the rising seawater levels and fallout of Superstorm Sandy. Design details for the new structure focused on maintenance-friendly bridge components, specifically with regard to the new movable span that crosses the heavily used 300-foot wide navigation channel.

George Harms Construction crews have been busy and are tackling challenges as they arise.

"One is providing construction access from both Perth Amboy and South Amboy to get manpower, equipment and materials out into the Raritan River for the new bridge foundations," said Garcia-Diaz. "This effort involved the construction of temporary trestles from the river's edge out into the Raritan River to a point where floating barges could be attached and then maneuvered to each bridge pier location as needed. This allows concrete trucks to drive over the floating barges straight out to each bridge pier.

"In addition to the trestles and the floating barge system for concrete delivery, a system of crane and drill barges are used to install 84 8.5-foot diameter drilled shafts to support 26 new bridge piers," she added. "The installation of each drilled shaft involves the lifting of as much as 178,000 pounds of steel casing; 256,000 pounds of reinforcing steel; and placing over 450 cubic yards of concrete adjacent to the existing bridge and at times within very close proximity to high voltage electric lines, transit signal systems and live train traffic."

Due to fish spawning activity, there is an environmental restriction in place between April 1 and June 30 each year that mandates no disturbance of the river bottom.

"In order to continue working in this three-month timeframe, the contractor planned ahead and installed 15 permanent steel casings for the new bridge foundations in advance of the start of the restriction window," said Garcia-Diaz. "This allowed work to continue within the casings during the three-month restriction without disturbing the river bottom, therefore progressing the work during the most favorable months for construction. "

Peak days have many GHC and subcontractor employees on site, with many local and regional subcontractors having been hired.

The amounts of the materials generated by demolition and excavation operations — concrete, steel and earth and rock are still being tabulated.