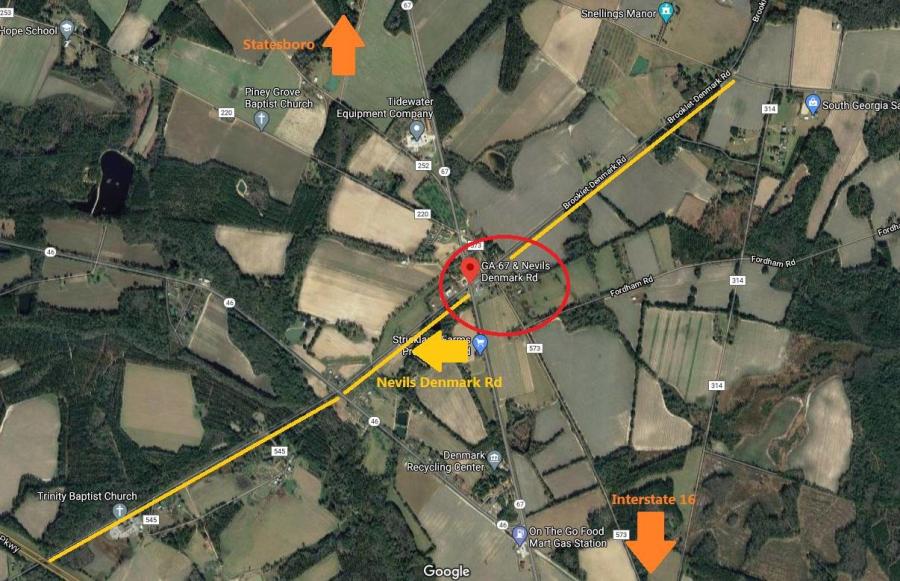 Less than a week after Bulloch County citizens launched a petition asking for the help of Georgia lawmakers regarding a deadly intersection, the county's Board of Commissioners said Sept. 9 it is actively working with the state and officials from the Georgia Department of Transportation (GDOT) to fix the problem, according to an original article posted on AllOnGeorgia.com.

The Bulloch County board announced that, with the assistance of Georgia State Rep. Jan Tankersley, it has been sharing concerns about the safety of the rural intersection of State Route 67 and Brooklet-Denmark Road south of Statesboro.

In addition to increased traffic flow on the road, SR 67 also was recently expanded from two lanes to four.

"We have known for several years before the SR 67 widening project that this intersection would become more dangerous without a traffic light," explained Roy Thompson, chairman of the Bulloch County Board.

"Our county staff has reached out to the GDOT District 5 staff in Jesup periodically about this issue since before the beginning of the construction project, and I have been in frequent contact with Rep. Tankersley. We have offered whatever county resources that we have available to expedite a solution."

Where Brooklet-Denmark Road becomes Nevils-Denmark Road in southern Bulloch County, it also crosses SR 67 — a corridor connecting Statesboro with the smaller communities of Nevils and Brooklet, as well as nearby Interstate 16.

For years, the connection point has been deemed "The Devil's Triangle" due to several serious and fatal crashes. But as the area has grown, so too have the number of accidents, for reasons ranging from speed and heavy 18-wheeler traffic to intersection angles and even the sun impairing the vision of some motorists.

As of Sept. 9, the county petition for redesigning the intersection had more than 3,400 signatures.

Rep. Tankersley has assured county officials that the GDOT is giving immediate attention to the increasing safety concerns.

"The District 5 office has recently informed me the re-evaluation of the intersection is already in process," she said. "A report may be issued as early as [the second full week of September] to include recommendations for consideration from a safety consultant. I have asked GDOT and Bulloch County to keep me informed on progress so that we all can be responsive to the concerns of our constituents on this matter."

According to Bulloch County Manager Tom Couch, signalizing a state-controlled intersection can be a lengthy process.

Using the intersection at Veterans Memorial Parkway and Cypress Lake Road near Statesboro as an example, Couch stated that "it has taken over a year to get state approval and permits where a bid for construction is finally approved. A traffic study or evaluation on signalization that meets GDOT warrants or justification is needed first. After that, there is typically up to four additional levels of approval needed before you can commence bidding and construction."

County Engineer Brad Deal said that he expects the Cypress Lake Road project will be completed as early as mid-December, depending on the weather.

"In addition to state permitting, on this project we have had to use an outside consultant to design the project to meet [GDOT] standards, move utilities and acquire additional right-of-way," he added.

Thompson stated that "we intend to be vigilant, yet helpful, in trying to get this situation corrected promptly. We understand that the state has procedures they have to follow, but in this case, what accommodated local traffic flows years ago is not sufficient as our community continues to grow."