Georgia DOT Awards $58.5M in Construction Contracts for May 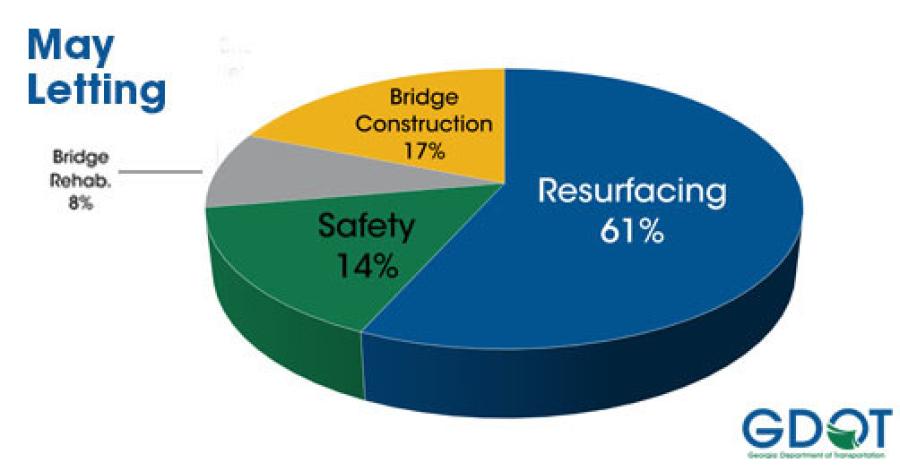 The largest single awarded investment, worth approximately $6.3 million, was awarded to Oxford Construction Company to construct 0.578 mi. of three bridges and approaches on State Route 37 over Pachitla Creek and overflows in Calhoun County. This contract, along with one other bridge construction contract, represent 17 percent or $10 million of the awarded funds.

The second largest contract, $4.8 million, was awarded to C.W. Matthews Contracting Co. Inc. to resurface 20.57 mi. of milling, plant mix resurfacing and shoulder rehabilitation on State Route 224 from north of State Route 26 to west of State Route 7 in Houston and Macon counties. This contract, along with 14 other resurfacing contracts, represent 61 percent or $35.6 million of the awarded funds.

The remaining 22 percent of awarded funds, or $12.9 million, is allotted for safety and bridge rehabilitation projects at various locations throughout the state.

The department invested in 11 safety contracts in May, of those contracts, seven will upgrade signage and pavement markings on various roads in Berrien, Cherokee, Emanuel, Putnam, Rabun, Stephens and Turner counties.

Project bids were received on May 22, and contracts were awarded to the lowest qualified bidders on June 5. The May awards bring the total construction contracts for Fiscal Year 2020 to $672.5 million. Fiscal Year 2020 began July 1, 2019.