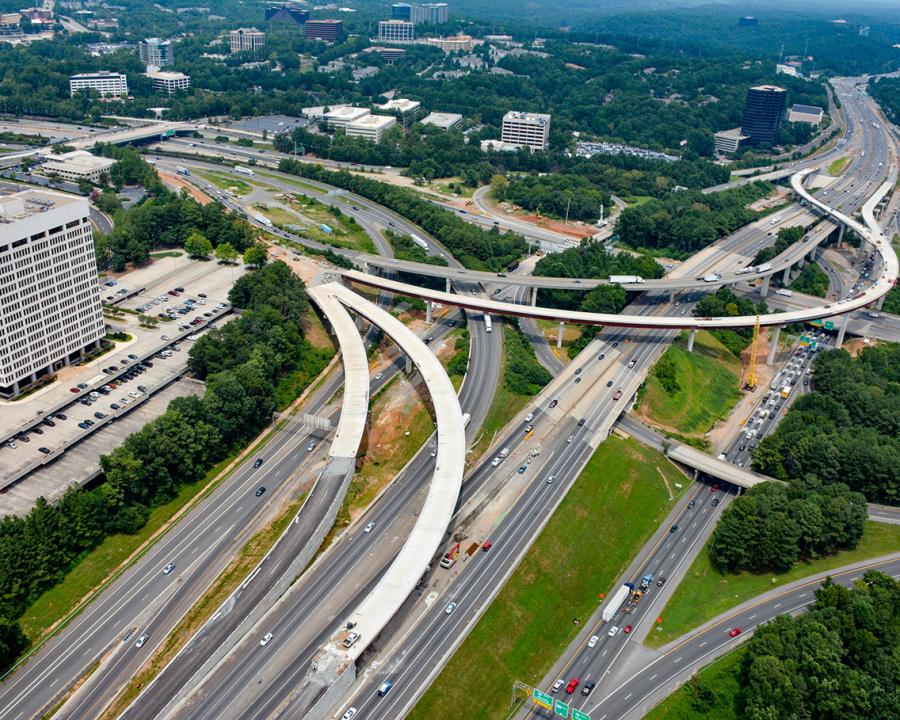 Crews in Georgia are beginning to see light at the end of the tunnel as they work to complete the $834 million Northwest Corridor Express Lanes (NWC) project. (GDOT photo)

Crews in Georgia are beginning to see light at the end of the tunnel as they work to complete the $834 million Northwest Corridor Express Lanes (NWC) project. Designed to improve traffic flow and increase options for motorists and individuals using transit and registered vanpools, the project will reportedly provide reliable trip times, create jobs and bring economic benefits to area residents when completed next year.

“We are working to add new tolled express lanes next to the existing general purpose lanes along a 30-mile stretch of I-75 outside the Perimeter from I-285 in Cobb County to I-575 in Cherokee County.”

The lanes will be managed by dynamic priced tolling, allowing drivers the option to pay a toll to bypass congestion. The project is part of the Georgia DOT's Georgia Express Lanes system, a network of toll lanes alongside existing interstates in some of the most congested corridors around metro Atlanta.

“The NWC project scope is impressive. There are 30 miles of new reversible express lanes, including 39 bridges [5.3 miles in total length], one of which is Georgia's longest land bridge at 1.13 miles. The project is approximately 50 percent paved asphalt and 50 percent concrete, with the lanes being barrier-separated and reversible. The express lanes will operate southbound in the morning , in the direction of Atlanta, and northbound in the evening,” said Lively.

The NWC project is following a Public-Private-Partnership (P3) design-build-finance delivery method. Total project cost includes the design-build contract, right-of-way and Georgia DOT administrative and agency costs. The NWC project is considered a critical piece of a strategic transportation plan to provide options for more reliable travel times, with benefits to both transit and registered vanpool customers in one of the region's busiest thoroughfares.

Rapid growth in population and employment in the Northwest Corridor is expected to continue through 2035. Unless significant improvements are made to the transportation system to accommodate this growth, congestion is likely to increase even more, with a further loss in mobility for corridor residents and employees.

“This project is located approximately 10 miles north of metro Atlanta, which is home to about five and a half million people,” said Lively. “Each day, approximately 450,000 vehicles move through the I-75/I-285 interchange, which is at the southernmost point of the project. The project itself cuts through Cobb County and a small portion of Cherokee County to the north of the project.

“Georgia DOT hopes this project will serve to provide a choice for motorists to use the express lanes when needed. The general purpose lanes will always remain open to travel without a toll. In addition, individuals using transit and registered vanpools will be able to travel in the lanes toll-free.”

Lively said the project is 80 percent complete, and on target to finish by summer 2018. One year from opening to traffic, it remains on schedule and on budget.

Area motorists are coping as best they can with unavoidable delays during construction.

“Georgia DOT works every day to ensure that both the traveling public and construction workers on the job site are safe as they travel through the 30-mile project zone. Unfortunately, lane closures and detours are a necessary measure for completing the work, especially bridge work. For example, when beams are being set, construction workers need additional space to safely complete the work.”

Russ Lauria, NWER senior project manager, said working on a project site of 30 mi. with work spread throughout the entire area and scopes of work also stretching along the entire corridor has been difficult at times, as has finding and retaining a skilled work force. The main area of construction right now is at the I-75/I-285 interchange and just north of this area on I-75 between Delk Road and Windy Ridge Parkway.

Of the more than three dozen bridges located on the project, the longest land bridge in the state is bridge 25/25A (Canton Road Connector) at 6,122 ft. or 1.16 mi. More than half of the 39 bridges are substantially complete.

There are a total of 264 bridge bents throughout the project, 199 bridge columns, 252 bridge foundations and 231 deck spans. More than 45,000 cu. yds. of concrete have been poured for bridge work within the project to date. The project also calls for 72 total retaining walls, 46 total MSE walls and 33 ramps.

ITS duct bank installation is 100 percent completed, and as many as 26 resistance gates have already been installed. Currently, 11 toll points with gantries and pavement have been constructed, with 22 of 26 total toll gantries completed, so far.

As part of the work, crews had to shut down the I-75 northbound exit ramp to I-285 westbound CD lanes to remove a concrete deck from the bridge over I-75.

“This ramp closure is being used to protect construction crews from vehicles due to the small size of the bridge,” said Lauria. “The closure is also to protect motorists traveling on I-75 under the bridge from potential debris during the removal process. The concrete removals are still ongoing and will be completed by the end of August. This operation has also included other traffic interruptions, such as various lane closures on I-75 beneath the bridge.”

The deck removal is making room for a new bridge to be installed.

“The concrete removals/demolition of the bridge is part of a two-phase operation,” said Lauria. “This operation is currently in Phase 1, which consists of shutting down and removing one side of the bridge, reconstructing it and opening it to traffic. Phase 2 will consist of the same operations; however, it will be on the other half of the bridge.

“This demolition operation will remove two separate four-span bridges, one with a total of 24 bridge beams and one with 20 bridge beams. The concrete removals/demolition of the bridge is part of a two-phase operation.”

The equipment required to perform this operation includes two excavators, one with a hammer attachment, and a crane, according to Lauria.

The I-285 interchange area presents the biggest obstacles, due to the complexity of the area, which includes multiple bridges and associated retaining walls.

This area also is difficult for construction crews to work next to the high levels of traffic constantly traveling through this area of the project. This area was one of the first areas to begin work, and will be one of the last areas to be completed. The I-575/I-75 interchange area has also been a big construction challenge, as this area required a gas main line relocation, as well as the removal of 150,000 cu. yds. of rock.

Concerning the scope of drainage and storm water management on the project, the design team had the daunting task of introducing more than 110,000 linear ft. of new storm water pipe to be incorporated into the existing drainage system along the project's limits.

Pipe sizes range from 18 in. in diameter to large 4x4 box culverts. Some are installed in shallow areas, while others reached depths of more than 45 ft. below roadway grade. To ensure quality, inspectors monitor the installation process, and all storm water systems are videoed for sustainable verification.

The most significant clearing occurred west of I-75, to make space for the new express lanes in the median of I-75 and for sound barriers along the entire project.

All express lane paving on I-575 is complete, as are the 10.4 mi. of express lane paving on I-75. Work takes place every day within the project. The bulk of work takes place during nighttime hours, utilizing lane closures and detours for work requiring the shutdown of entire ramps or roadways. Daytime work is most common Monday through Friday between 9 a.m. and 5 p.m. The NWC project has approximately 500 employees on the project, which includes salaried and hourly workers, and subcontractors.

Throughout most of the project construction and at several locations along the corridor, a number of activities have regularly taken place. They include drainage work, clearing and grubbing, paving and pavement marking and placement of ITS/ETCS conduits, foundation and equipment.

As many as 1,100,000 cu. yds. of dirt have been excavated to date, which amounts to 120,222 truckloads. The building of the bridges and retaining walls has taken the most lead and construction time to date, especially between the I-575 interchange and I-285 interchange, due to the very narrow “right of way” and the challenging terrain that requires 75 percent of the roadway section to be either on a bridge or retaining walls.

Sustainability has played a role in construction, and is a concern for the entire team.

“NWER has a recycling plan which was implemented to increase the number of items that are recycled and/or reused on the project, effectively reducing the waste from the project,” said Lauria.

The various items recycled throughout the project include milled and crushed asphalt, crushed concrete, which is reused as road base throughout the project, and steel from beams that are salvaged when possible and sent to recycling facilities to be used on other projects. In addition, mulch material is utilized on site wherever applicable, such as erosion control/ground stabilization.

For Lively and the entire Georgia DOT team, keeping the traveling public informed about all aspects of the construction is a priority.

Lively also said it's rewarding to see progress being made each day.

“I first got involved in the Northwest Corridor project in December 2015, when the project was about 50 percent complete. Although I was not part of the initial stages of original concept and design, I am very proud to be a part of such a dedicated team that is bringing Georgia's most complex and largest tolled project in the state's history to completion. This project will not only greatly improve the commute for the northwest metropolitan area, but will also serve as a model project for the Georgia Express Lanes program throughout the greater Atlanta metropolitan area.”