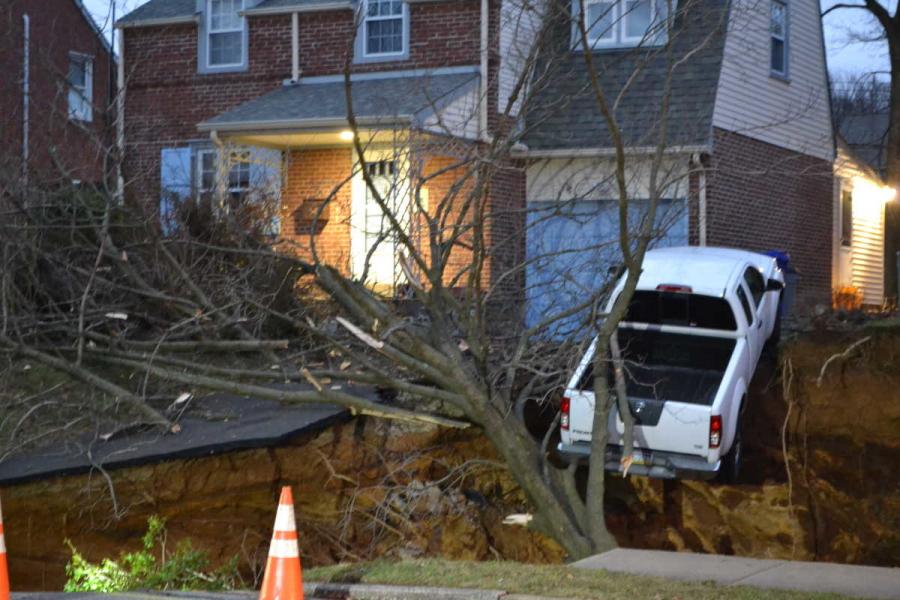 A massive sinkhole opened up on Brooke Road in Glenside on Wednesday. EMILY CASHER LOOMIS

Crews were pumping concrete into a giant sinkhole that opened overnight on January 25 in Glenside, Montgomery County, nearly swallowing a pickup truck in a driveway and knocking out a water main.

No injuries were reported in the incident on Brooke Road, in Cheltenham Township near the North Hills Country Club. About 65 homes temporarily lost water.

Water utility officials said it could be days before they know what caused the sinkhole. They were not aware of any leaks, said Marc A. Lucca, president of Aqua Pennsylvania, whose workers were on the scene along with emergency, township, and Peco workers Wednesday morning.

“As we fill in the voids, we're going to learn more about how big this is,” Lucca said. Then crews will be able to figure out what to do next to repair the area.

The sinkhole is between two homes, swallowing the driveway of one, along with part of the sidewalk and street. The residents were evacuated. Another smaller hole also opened up in the street.

The pickup truck was tethered with a chain and stabilized.

The residential street is closed between Argyle Road and Chelfield Road.

As trucks rumbled on the street Wednesday, a dozen neighbors watched from behind caution tape.

"My husband heard a noise in the middle of the night, but it sounded like a metal trash can rolling down the street," said Jodie Taraborrelli, who lives down the block from the sinkhole.

Her family did not know what had happened until they woke up to text messages from friends asking if they were OK, heard the trucks on the street, and looked out the window.

The gas was shut off to some homes and water to most, Taraborrelli said. She said her home was built around 1940.

A 37-year-old attorney, she took the day off work.

“I didn't know if I was going to be told to evacuate,” she said.

Aqua was alerted by a resident who called around 4 a.m. to say their water was not on, Lucca said.

Sisters Emilee and Celeste Macnamara, who live behind Brooke Road, said they had been watching the activity since about 9 a.m., as other neighbors came and went.

They were not too worried about their own house.

"It's more of, Why did this happen? How did this start?" said Celeste Macnamara, a 22-year-old student Montgomery County Community College who said she had seen minor sinkholes in the neighborhood in the past.

Sinkholes form when water washes out sediment from an area with carbonate bedrock, which creates a void space and causes a cave-in. That type of sinking of surface material can occur naturally or be caused by underground mining, groundwater pumping, or erosion because of utility-line failure, according to the Pennsylvania Department of Conservation and Natural Resources.

The sinkhole evidently was unrelated to nearby mining activities, said Virginia Cain, spokeswoman for the Pennsylvania Department of Environmental Protection. Although two quarries are located within minutes from the street, "the locations and operations ... rule out mining as a cause for today's sinkhole," she said.

Water was being restored to homes Wednesday afternoon, and Lucca said all but the four closest to the sinkhole were expected to have water by dinnertime.