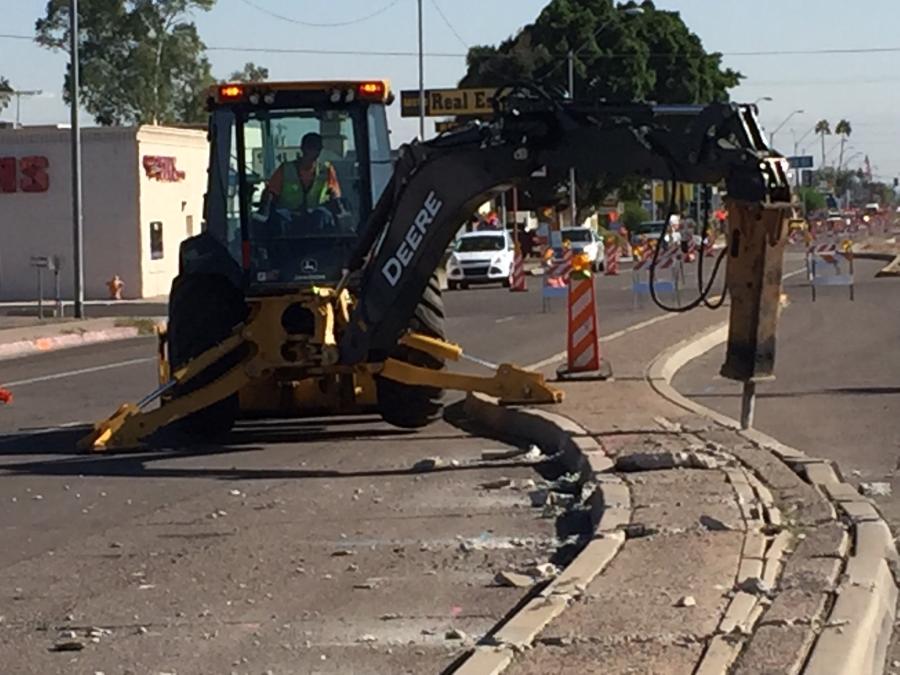 The roundabout was designed to help reduce traffic wait times and encourage a smoother flow of traffic in the area. The intersection where the roundabout will be located currently has a traffic light.

The roundabout will help avoid backups while traffic waits to make left turns off both streets. Protective gates will stop traffic when trains come by every 12 minutes during the day. The only other light rail system to have a roundabout is in Salt Lake City, Utah.

The extension is slated to open in 2019. Revenue for the project is from federal and local funds. Jacobs Engineering Group based in Pasadena, Calif., provided the final design for the project.

Valley Metro provides eco-friendly public transit options to residents of greater Phoenix and Maricopa County, including the planning and operations of a regional bus system and the development and operations of 23 mi. (37 km) of light rail. In Fiscal Year 2015, total ridership for the system was 71 million passengers. Trains make 178 trips rolling east and west on Main Street in Mesa Monday through Thursday.

Six light rail extensions are planned or are under construction that will create a 66-mi. (106 km) system by 2034. The next one will be the Tempe Streetcar Project, which is in the design phase. That service is expected to open in 2020.

The Gilbert Road project is expected to protect historic resources including businesses and historic neighborhoods along Main Street.

“Light rail is a proven catalyst for regional and local economic vitality,” said Corinne Holliday, public information specialist for Valley Metro. “The 26-mile Valley Metro line has generated $8.9 billion in economic development. In Mesa, extending light rail through the heart of Mesa has already seen more than $90 million in economic development along the extension to Mesa Drive, which opened in August 2015.”

Construction zones will vary depending on construction activity and very rarely will a road be closed. The agency conducted outreach with businesses and residents prior to the project.

Valley Metro will work with merchants along Main Street to make sure access to their properties remains unobstructed during the Gilbert Road Extension project. Also, signage will help direct traffic to the businesses.

“It's a priority for Valley Metro to support businesses during construction,” Holliday said. “The neighborhood and the business community is an important stakeholder throughout the construction process.”

Valley Metro prepares a custom business assistance program for each new rail extension designed to best serve the specific business community in that area. Along with signage, businesses are provided with marketing and technical assistance, business counseling, loan programs and peer-to-peer forums.

Stacy and Witbeck/Sundt also constructed Valley Metro Rail's Northwest Extension in Phoenix, which opened earlier this year and a portion of the original 20 mi. (32 km) of light rail that opened in 2008.

About 200 workers will be on the Gilbert Road Rail Extension project each day during peak construction.

• Station platform and track installation — During this construction phase, major light rail infrastructure is installed. Work will primarily take place in the center of the roadway. Temporary traffic controls will be in place to ensure a smooth and safe flow of traffic.

• System and station finishes — These activities will mainly occur along the tracks and in station areas. They include a transit center, operator facilities and art and architecture elements. The work will require minimal lane closures and traffic restrictions. Once complete, this work will conclude railway construction.

• Train testing — Train testing is the final step before the extension opens. Testing allows for a full inspection of the system, including track and overhead wire and operator training.

In 2011, Valley Metro initiated the Gilbert Road Extension study. It identified and evaluated various ways light rail could be placed within Main Street. In 2012, Valley Metro entered the environmental phase of the study, which included further review of design options and locations of the stations and park-and-ride.

A preferred design option was adopted by the Mesa City Council in April 2013. The project's environmental review was completed in 2014 and the final design team kicked off their efforts in August 2015.

The scope of the work was expanded to include drainage improvements and landscape enhancements. There also were design changes including elimination of a roundabout on Main Street at Harris Drive.

Removal of the roundabout allowed for additional landscaping and a continuation of the enhanced streetscape on the Main Street extension.—CEG