Gilchrist Works on Its Portion of DOTD's I-10 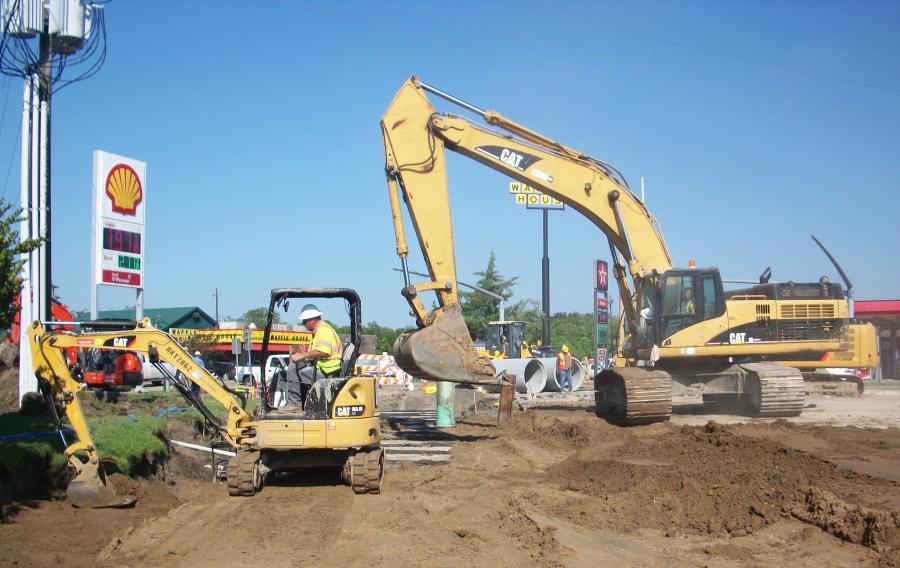 Crews from Gilchrist Construction Company LLC have been working steadily on the $54.7 million Louisiana Department of Transportation and Development (DOTD) project along 2.7 mi. of Interstate I-10 to reconstruct and widen the four-lane (two lanes in each direction) section of highway.

Crews from Gilchrist Construction Company LLC have been working steadily on the $54.7 million Louisiana Department of Transportation and Development (DOTD) project along 2.7 mi. of Interstate I-10 to reconstruct and widen the four-lane (two lanes in each direction) section of highway.

The FASTLANE (Fostering Advancements in Shipping and Transportation for the Long-term Achievement of National Efficiencies) project is part of the DOTD's multi-million dollar infrastructure investment along the I-10 corridor in the Acadiana region.

In July 2016 the DOTD stressed the $60 million it received in FASTLANE grant funding from the United States Department of Transportation (DOT) for the overall I-10 project, which is based on three projects.

“Given the competitive nature of the FASTLANE grant, DOTD was thrilled to be selected as a recipient of the fourth highest award amount in the country,” said DOTD Secretary Shawn Wilson. “The FASTLANE grant has allowed our state to expedite projects that would have otherwise stayed stagnant for years to come due to inadequate funding. This grant gives Louisiana's infrastructure an opportunity to be more competitive on the national level.”

Gilchrist Construction secured its contract with a $54.7 million bid.

The work in St. Martin Parish is replacing the pavement on the existing lanes for 2.7 mi. along I-10 from La. 347 to the base of the Atchafalaya Basin Bridge. An additional lane will be added in the westbound direction.

The first contract to widen the I-10 corridor, $124.7 million, was secured in December 2016 by James Construction Group LLC. It started its work last April, which has them replacing the existing lanes and constructing one additional lane in each direction for 6.48 mi. along I-10 between I-49 and La. 328.

The I-10 corridor currently carries more than 60,000 cars per-day and when completed, will be able to handle108,000 vehicles daily and meet traffic demands for the many years. This is an important section of highway as it provides a direct connection to I-49.

“This project is an important milestone in improving the critical I-10 corridor,” said Bill Grass, public information officer, DOTD District 6. “The improvements will benefit the traveling public and freight carriers who use this interstate every day. This region of Louisiana is an important one for tourism, and we look forward to our visitors continuing to travel safely and efficiently through Acadiana.”

The road work infrastructure was designed by Sigma Engineers and Constructors.

“There were no design challenges for the bridge structures,” said Nicholas Olivier, DOTD's project manager administrator. “Typical reinforced concrete, precast-prestressed concrete and steel girder design was used to widen the existing structures. Geotechnical design challenges involved weak soils where piles were driven. Piles were lengthened to tip into the sands, which is a common way to deal with soft soils.

“This area still lies within the Basin soil zone which consists of weak clays with sands fairly deep,” he said. “These soils are not unique inside of Louisiana and are expected in this part of the state.”

Measures are being taken to reduce the long-term impacts of trucks using the road.

“From a structure perspective, new approach slabs leading to the bridge ends will be provided having increased soil improvement underneath,” said Olivier. “This improvement is intended to alleviate the 'bump' effect typically experienced at the ends of bridges in Louisiana due to settlement underneath the approach slab. This will improve the wear-and-tear on both the bridge structure and the large trucks carrying heavy loads.

“The traffic data provided to the pavement design section includes the projected traffic over the design life of the pavement,” he added. “Our pavement designs take the impact of heavy trucks into account and a structural design analysis was performed to determine the pavement thickness required to carry these loads.”

“However, due to preservation, preventative maintenance and rehabilitation activities, our pavements last much longer,” said Olivier. “Our Life Cycle Cost analysis is based on a 40-year performance period, so we typically have pavements that last 40 years or longer.”

The traffic management plan is based on temporary traffic control, public information and transportation operations.

“We at DOTD are encouraging motorists to be aware of the construction zones and practice safe driving habits when passing through,” said Grass. “Unfortunately, we've seen an increase in accidents here since work began. We want to stress to travelers to pay attention and avoid all distractions while driving, and we also have several resources that provide the latest information regarding road conditions.”

These resources include signing up for alerts from MyDOTD, visiting www.511la.org or dialing 511 and viewing several localized Twitter accounts that provide up-to-date travel information. Travelers can visit www.dotd.la.gov to access these resources.

A key goal for the 2018 construction season is to complete the inside widening of I-10 WB to allow for a traffic switch and start reconstruction of the existing I-10 WB lanes. Another is the completion of the round-about on La. 347 and moving traffic to the new alignment.

“It's going fine, we're moving along,” said Brian Buckel of Gulf Engineering Consultants (GEC), project engineer for the project. “We've put the temporary detour re-routing on La. 347 so that we could start construction of the roundabout, and we're getting started with the widening on the I-10 inside lanes WB and started the I-10 widening of the bridge over La. 347.”

Traffic is the greatest challenge for the crews.

“You're alongside an interstate with a lot of traffic and trucks entering and existing,” said Buckel. “Safety is our biggest concern. We have to maintain two lanes of traffic during daylight hours — the only time we're allowed to close a lane is at night and night operations make it a little harder to keep everybody safe. This project is fortunate — night time work should be limited. The biggest challenge is in 2019 when we will be widening the road right at the Atchafalaya basin bridge, which is only two lanes. We're going to have to take it down to one lane over a long weekend to get it complete and back open for Monday morning traffic.”

While the work zone appears to be tight, there is space behind the concrete barrier.

“It's just getting in and out of active lanes of traffic,” said Buckel. “We also have big trucks carrying materials coming in and you have small gaps in your barrier wall to allow them to enter and exit. They have to slow down on the interstate and they are in the left-hand lane. That is a bit of a problem, we're warning motorists to use the right lane to let the trucks in. We've put up additional signage and keeping a police presence there to urge people to slow down and move over.”

While deliveries and material removals are done after rush hours, the I-10 has a constant flow of traffic. The majority of the work is done by day. Most of the night work occurred at the beginning of the project.

Gilchrist's project manager is J.J. Hickey, who is assisted by Andrew Brady, an assistant engineer, and asphalt superintendent Curnest Guillot and structure superintendent Kent Burnaman. Hickey and his team hold weekly progress meetings with GEC and the DOTD. Buckel, who worked at the DOTD for 31 years prior to his retirement, stressed that communications ensure problems are resolved rapidly, and noted that he has been on several projects involving Gilchrist.

“We all know each other and we communicate constantly,” he said. “This past weekend [Dec. 9 to 10] we got snow — very unusual and we needed to get the striping straightened up a little bit.

“We turn things around as much as we can. Every day of work that we can save not only saves money for the DOTD and the contractor for finishing the project early, but makes it safer for the motoring public to have the road back for their use and creates less chances of an accident occurring on the project.”

Hickey is pleased with the progress thus far.

“Having completed several interstate widening projects along the I-10/I-12 corridors,” he said, “we have learned how to properly plan and sequence the work so that both bridge and road widening can be completed with minimal interference with each other. We have also learned that keeping resources focused on completing sections of a project as we go is often more valuable than spreading out up and down a project just to maximize units per-day.

“We believe that focusing on the safety of our teams, partners and the traveling public first maintains good morale by everyone involved in a project, because they appreciate a safe work environment,” he said. “We then emphasize the quality of our work, minimizing re-work, and using every opportunity to train. The better our teams understand what we are building, the more enthusiastic they are about building it. We also believe that communicating and involving our teams in their own work planning causes them to take more pride and ownership in their work. We are proud to have brought on some new team members for this project and are very excited about the progress and development we are seeing in them.”

The project is keeping the mechanics busy.

“Most significantly on-road trucks and high-impact equipment such as milling machines, breakers, etc.,” said Hickey. “Also, the maintenance of our plants can be quite complex and may often require support from out of state.”

Gilchrist has onsite mechanics, whose skills are upgraded via manufacturer facilitated training, webinars, and videos. A key aspect of the company's maintenance program is preventive maintenance.

Gilchrist purchases equipment from dealerships, including but not limited to, Louisiana Machinery, Head and Engquist and Doggett.

“Fast, reliable, and efficient service is what we seek from our dealerships,” said Hickey. “On our part, we bring a consistent backlog of business, variety of equipment utilization, and strong creditworthiness.”