A real-life manifestation of the adage “everything’s bigger in Texas,” is taking place on a huge tract of farmland about 35 mi. northwest of Houston. 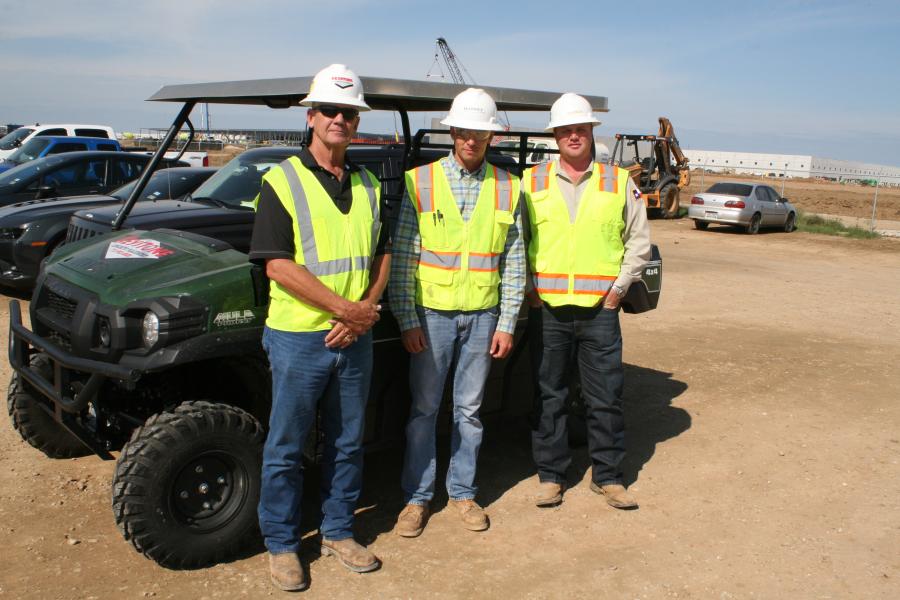 A real-life manifestation of the adage “everything's bigger in Texas,” is taking place on a huge tract of farmland about 35 mi. (56.3 km) northwest of Houston. There, global air conditioning supplier Daikin Industries Ltd., is building the world's largest tilt-wall structure to house all facets of its operation — manufacturing, distribution and office space — which currently exists in a number of separate buildings in Houston. In fact, at 4.1 million sq. ft. (380,902 sq m) of total space, the building will instantly become the second largest structure, in terms of square footage, of any kind in the world, trailing only Boeing's Everett, Wash., assembly plant at 4.3 million sq. ft. (399,483 sq m). While the sheer magnitude of such a project is daunting — the site itself covers more than 500 acres — the earthmoving, grading and concrete paving facets of the job have moved along nicely due to a cooperative GNSS effort between three of the major firms on site. Joining forces to tackle a huge challenge? Also very Texas-like. Remember the Alamo.

Land clearing on Daikin's new site, located near the town of Hockley, started in January 2015. That was followed by a massive earthmoving effort, which by project's end will have entailed movement of more than 1.8 million cu. yds. (1.37 million cu m) of soil, according to Chase Baker, co-owner of Choctaw Construction Services of Katy, Texas, one of several major subcontractors on the job.

“The general contractor for this project is the Houston office of Harvey Builders,” he said. “Burnside Services Inc. (BSI) is acting as an earthmoving subcontractor to them and we are subbing to BSI, helping with some of the rough grading and handling the fine grading portion of the job as well. To move that massive volume of dirt, BSI and our company put together a fleet of Case 580 tractors pulling 33 cubic yard K-Tec 1233 scraper pans. The K-Tec scrapers have a higher ground clearance than any other pans available today and, given the often muddy conditions we've had to deal with, have really kept that facet of the project moving along. At one point there were nearly two dozen Case/K-Tec tandems at work — it was quite a sight.”

Conspicuously absent throughout the Daikin site is evidence of any grading stakes — impressive given the overall amount of earthmoving taking place. BSI's workload alone involves 20 million sq. ft. (1.8 million sq m) of rough grading. According to Baker, all three companies involved in major earthmoving and grading have almost entirely bypassed traditional surveying techniques in favor of GNSS machinery and equipment.

“At this point in the project, we are pretty much all in agreement that there's no way this job could be done without using GPS,” he said. “Not only would we have needed an army of people out there setting blue-tops, the surveying costs associated with it would have been astronomical. Instead, because we all have experience with GNSS technology and own equipment with machine control on it, we worked with a couple of engineers who took the existing plans, created a digital model, and loaded it into our respective dozers, scrapers, graders and excavators. Working off a single Topcon GR-5 receiver, we got to work.”

As a result of that consolidation of effort, BSI, Keystone and Choctaw are all on the same page with regard to what needs to be done, what changes have been made, and so on. Baker said the Daikin job is ideal for machine control and examples of that occur almost daily.

“One of the biggest challenges has been the contour lines that we have to cut and the fact that the swales are all flatwork,” he said. “Everything out here sheet drains, so trying to blue-top for all the different angles, points and swales would be next to impossible. Instead, we are cutting against the swales and the contour just forms and flows. We've done as much as a 75,000 square foot block of fine grade in five hours and are doing it with two operators: a dozer out in front and a grader behind him. Who can argue with that?”

All About the Yield

Though Keystone's role differs from that of Choctaw's and a far cry from the rough grading BSI is handling, it is no less critical, nor demanding. For them, however, a NorAm 65E turbo compact motorgrader, equipped with Topcon 3D-MC2 machine control, is proving ideal for the fine grading they are doing in advance of paving. Both are recent additions, according to John Lively, Keystone's project superintendent.

“Keystone has a number of companies under one umbrella and one of those is an earthwork company that recently used Topcon GPS on a project they did — a parking lot for a local school district. It was so successful that, when we landed this job, we immediately purchased the NorAm motorgrader and outfitted it with the full Topcon 3D-MC2 system.”

Lively said that Choctaw initially gets the grade to within .10 of a foot, but by the time his crews get to working on it, things have been run upon, compaction has occurred, etc., making additional fine grading necessary. Failure to do so, particularly on a job of this size, he said, could wreak havoc on their bottom line.

“With this huge an area, we're extremely sensitive to things being graded to the right elevation to eliminate the risk of over pouring,” said Lively. “A half inch of additional concrete across a site this large is a ton of money. So, after every pour we monitor the yield: we take the square footage and the thickness, calculate how much we should have poured and compare it to how much we actually did pour. A company like ours can have two to three percent overages and still remain profitable. We've been well within that range thanks to the accuracy of the grade we are getting with the Topcon system.”

The number of variables present at the Daikin site — the differing levels of work which will be taking place, whether or not heavy vehicle traffic will be present in an area, if machinery will be supported, and so on — is reflected in an equally varied range of pad and pavement thicknesses, according to Lively.

“Concrete thickness runs anywhere from five to ten inches throughout the site,” he said. “There are sections that are five inches thick, there are some that are eight, nine or ten inches thick. And, to complicate matters, in many areas, the thicknesses are not segregated. We have parking lots in which the general area is seven inches thick but the drive lanes around it are nine inches. It varies greatly.”

With that overabundance of differing elevations, grading using traditional methods could also have been a nightmare. But GNSS, according to Baker, tackled it with surprising ease.

“It was really simple with the Topcon system,” he said. “We would just dial in the offsets and be able to easily switch between the differing grades. Even though we have really good operators, just to ensure accuracy, we are still regularly checking progress with rovers. But we've been spot-on every step of the way.”

Because of the centralized GNSS approach taken by the three contractors, all service and support also has been through a single source: the Houston branch of GeoShack. Both Baker and Lively say that support has been outstanding.

“Right from the outset, GeoShack was on top of this,” said Lively. “Scott Bird, their machine control specialist, recognized that we were fairly new to the technology, came out to the site to help us set up, and helped us all through some early-stage “hiccups.” In addition, because of the amount of equipment we all have in place, GeoShack designated a full-time technician to be out here. So now, whether we need help with an issue or just want to further advance our understanding of the system, they are almost immediately available.”

Baker has been equally impressed with the level of support both Topcon and GeoShack have provided. “We've had offers from other GPS equipment manufacturers and suppliers, but feel that Topcon and GeoShack have really been there for us,” he said. “Things have gone so well out here that, despite heavy rains that impacted production, we are still on track to meet a planned early 2016 partial move-in, and well ahead of our own self-imposed deadlines. To go from an empty field to where we are now — in just over a year — seems almost impossible. But having us all 'sharing' the Topcon solution, so to speak, improved everyone's efficiencies and made it very manageable.”