The story that began with a con and the loss of man’s savings did not end nearly so badly as it might have. 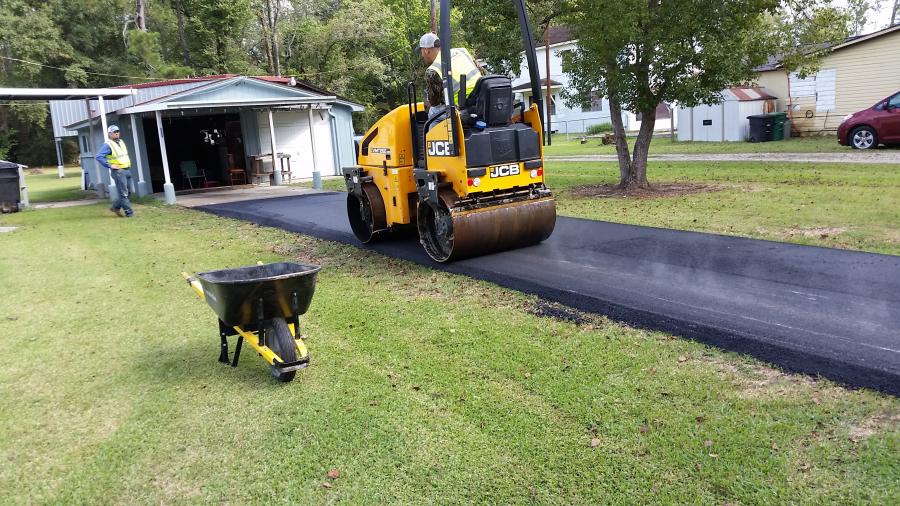 The folks at Chance Contracting, founded by Isaac Chance and now owned by his sons Brett and Shaun Chance, just wanted to help.

Carol Broussard had watched the re-topping of local asphalt roads in around his house for days. So when a truck pulled up in the driveway and the driver asked Broussard if he'd like an asphalt drive, the 91-year-old WWII veteran said, ‘Sure.'

That was the first mistake.

There would be several more. But as it turns out, the story that began with a con and the loss of man's savings did not end nearly so badly as it might have. Rather, it became the real life story of the kindness of strangers.

The story unfolded in early October. After Carol agreed to the work, the man returned moments later with a large truck and dumped the asphalt, packed it down and oiled it.

But Carol had already made a second mistake.

“He didn't ask the price,” said son George Broussard. “When the work was finished, my dad let the guy come in the house, and that's another no no. They sat down at the kitchen table and my dad asked how much he owed him and the guy said $25,000. My dad was incredulous. ‘I don't have that kind of money,' he told him. The guy said, ‘What do you have?'

Carol went back to the room where he keeps a stash of cash and came back to the kitchen with a stack of bills and put it on the kitchen table. Then he told the man he had to use the restroom and would be right back.

“He left the guy sitting in the kitchen with his check and his money and when he came back out they were gone,” George said.

And Carol was left with scrap asphalt that wouldn't hold up two weeks.

George called the police, filed a report and hoped for the best. And that's when things took a turn. A reporter with KPRC 2 in Houston saw the police report and asked the father and son pair if they would do an interview on TV. They agreed. When it aired that night, Glenn Harris, owner of Harris Construction in Houston was watching.

“When I saw the 91-year-old vet and the look on his face…” Harris said. “This was something I thought I could take his problem away. We're down here in the South and we're pretty friendly. We don't mind helping anyone who is in trouble.”

But Harris works in concrete, and when he got to the Broussards', he saw it definitely called for an asphalt contractor. So he turned to Chance Contracting, a family-owned paving company he often does business with.

“When I called Chance, and told them what had happened, I said, ‘I am not calling you to do anything,” Harris said. “I told them, you send me a bill when you do the work, I just want to help this guy.”

But the folks at Chance Contracting, founded by Isaac Chance and now owned by his sons Brett and Shaun Chance, just wanted to help as well.

“That's the kind of people they are,” Harris said.

Two weeks had passed since the con artist struck.

“It looked terrible,” said Brett Chance. “It was bad. They had taken the road millings and told them it was new asphalt. They had taken that and spread it really thin over a lot of grass. By the time we got to it two weeks later, a ton of vegetation had grown up through it.”

And for that Carol had handed over $14,000, more than double what a honest job would have cost him.

“The amount they put down cost them $700,” Chance said. “We felt absolutely terrible. The man is good guy. He fought for our country. It just makes you mad. We did what we could. We helped him out. We're fortunate we have a lot of customers like Glenn. We can help people like him. If we can give back while we're here, it makes me sleep better at night. God will show us blessings later in life.”

The good deeds have not gone unnoticed.

“When I first saw the video news clip on what Chance Contracting did for this veteran … I said this is the type of story that should go nationally,” said Bryce Davis, general sales manager of LeeBoy. “We at LeeBoy are very proud to be associated with contractors like Chance … for giving back to their local communities and charities. I recently had the opportunity to meet both Shaun and Brett Chance and thank them for what they did. After meeting them, you can tell instantly why they did this, both are very impressive individuals who seem to let their actions speak for them.”

George is grateful for the generosity shown his dad, but still hopeful the police will find the men who essentially robbed him.

“The name on the check that my daddy wrote was Willie Ruth,” George said. “This is the name that the man sitting at my dad's kitchen table told my dad to make the check out to after making a phone call and asking who the check should be made out to. So I really don't know how many people were involved. Possibly only two, or more likely four or five.

“My wish right now is that some other Good Samaritan will come along and offer to see that my dad gets the money back that he was swindled out of. I know that is probably a tall order. But I can hope, can't I?”