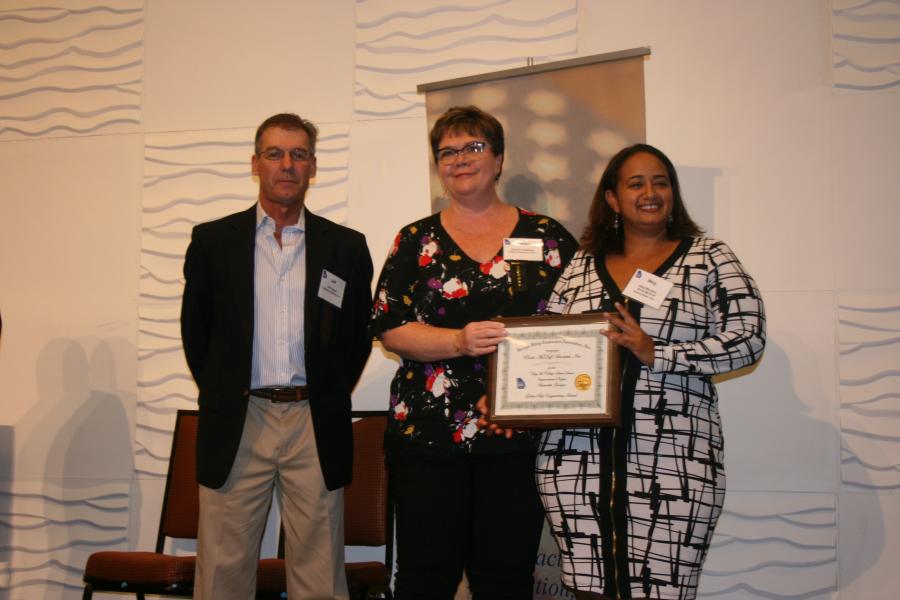 The GUCA Golden Pipe Engineering Award has been a couple of years in the making.

Making its debut this year, with the insight of past GUCA President's and the Engineering Award Task Force, the Golden Pipe Engineering Award is designed to recognize engineers who demonstrate the highest degree of merit and integrity for the utility construction industry. GUCA recognized two outstanding engineers.

Rindt-McDuff Associates (RMA) began providing engineering services to local governmental clients in 1980. Over the years, it has expanded its client base to include industrial, commercial and land development clients. The firm's growth has been fueled by its single-minded focus on the interests of its clients.

RMA sets high standards in providing client advocate services. Its goal is always to work together for the best solution to meet needs in a cost-effective and efficient manner. RMA has worked in the public sector for more than 30 years and understands the competing factors of public perception, budgets, schedules, alternative uses of local and grant funding and political realities.

RMA was nominated for the King & College Street Sewer Improvement Project in Adairsville, Ga. The project was bid February 2018 and will be completed November 2018.

It was originally bid to be 100 percent a dig-and-replace project. However, the contractor suggested value-engineering it and recommended trenchless technology via pipe bursting. RMA was receptive to the suggestion and allowed the contractor to complete the project. The teamwork between the engineer, owner and contractor was the reason the project was a success.

Goodwyn Mills & Cawood (GMC) was established in 1947 by civil engineers Don Mills and George Goodwyn. The leaders identified emerging talent from within and Steve Cawood joined the company in 1985 as partner forming the present GMC.

In 1986 GMC began its evolution into a multidisciplinary firm when architecture was incorporated into its services. Later, landscape architecture, transportation engineering and environmental engineering were added to the firm's menu of services.

GMC was nominated for the Veterans Parkway Water & Sewer Improvements Project in Toccoa, Ga. The project was bid June 2016 and completed July 2017. GMC assumed this project through the requisition of another firm. The cost estimate was three years old and created an over budget bid amount. Through the efforts of the city, engineer and contractor, value engineering and improved construction means and methods created a project that met the original design needs on schedule and within budget.