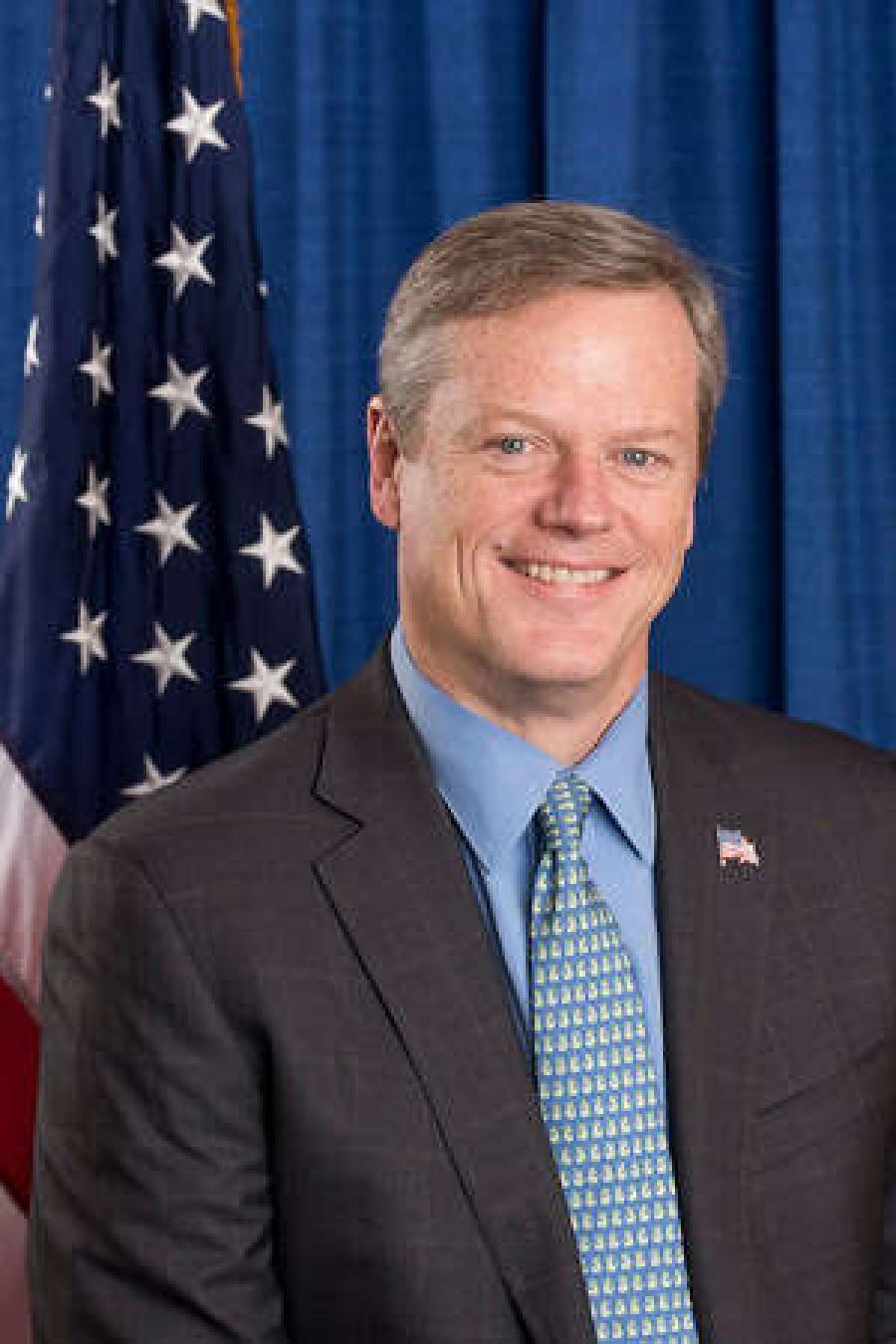 Massachusetts Gov. Charlie Baker signed an Executive Order establishing the Commission on the Future of Transportation in the Commonwealth. (mass.gov photo)

Gov. Charlie Baker signed Executive Order No. 579 on Jan. 23, 2018, establishing the Commission on the Future of Transportation in the Commonwealth to advise the Baker-Polito Administration on future transportation needs and challenges. The Governor named 18 appointees to the Commission, which will develop a range of scenarios anticipated between 2020 and 2040 and be used to inform the panel's findings. The Commission will meet monthly and will provide a report on the analysis of members and make recommendations by Dec. 1, 2018.

“This commission will advise our administration on the future of transportation in Massachusetts that sensibly accounts for impending disruptions due to changes in technology, climate, demographics and more,” said Baker. “Making informed transportation decisions and policy guided by the best analysis possible will be the foundation for success across the board in years to come to keep our innovation economy thriving and competitive.”

“Members of the Future of Transportation in the Commonwealth Commission have generously agreed to help us chart an important future of the Commonwealth,” said Lt. Gov. Karyn Polito. “Our appointees bring exceptional institutional knowledge of our transportation history and a keen understanding of the challenges Massachusetts will need to address over the next several years.”

“I look forward to working with members of the Commission, many of whom are professionally recognized as leaders in fields that will impact transportation, as we wrestle with a wide range of facts and trends to develop plausible scenarios and guidance to decision-makers and other stakeholders,” said Steven Kadish, who will chair the Commission.

“This Commission positions the Commonwealth as a national leader in factoring the impacts of technological advances, climate change and changing transportation consumption habits into its capital investment and strategic planning processes,” McAnneny said.

The Governor named 18 members with a range of backgrounds and skill sets to serve as unpaid members of the Commission, which will be chaired by Baker's former Chief of Staff, Steven Kadish. The Secretary of the Executive Office of Energy and Environmental Affairs and the Secretary and CEO of the Massachusetts Department of Transportation will serve as ex officio members.

Commission members will focus on at least five key areas anticipated to have a dramatic impact on transportation in the future:

• transit and mobility services; and

• land use and demographic trends.

“This is going to be a serious effort, with a broad range of experts who will seek to better understand and evaluate how technology and other forces in society will affect transportation in the decades ahead,” said Transportation Secretary and CEO Stephanie Pollack.

“We believe Massachusetts is the first state in the nation to convene a group like this which will play an important role in looking at disruptive changes in transportation, an exercise that is essential to laying the foundation for any future transportation blueprint. Those same forces could affect the types of capital investments Massachusetts will need and should make as well as the sources of revenue to support such future infrastructure investments in the Commonwealth.”

“The Baker-Polito Administration continues to utilize a collaborative approach to work across state government and with our cities and towns to reduce carbon emissions and prepare for the impacts of climate change,” said Energy and Environmental Affairs Secretary Matthew Beaton.

“As Massachusetts continues its efforts to meet our commitments under the Global Warming Solutions Act of 2008, the Commission on the Future of Transportation in the Commonwealth will be crucial in identifying solutions to achieving substantial greenhouse gas emission reductions from the transportation sector.”

The Baker-Polito Administration began a series of statewide listening sessions in September 2017 to discuss possible solutions for reducing greenhouse gas emissions from the transportation sector. Following the forums, state environmental and transportation leaders continue to develop the Commonwealth's strategy to reduce transportation sector emissions, develop a comprehensive regional strategy for the deployment of zero emission vehicles, and increase the resilience of transportation infrastructure as the climate changes.

The Commission will engage with a range of non-profit groups, academic thought leaders and other stakeholders. As needed, Commonwealth of Massachusetts knowledge experts in various secretariats will be providing information to the Commission.

In addition to Secretaries Pollack and Beaton serving as ex-officio members, other members of the Commission include:

Kadish is a senior research fellow at the Taubman Center for State and Local Government at Harvard University's Kennedy School of Government, after serving as Baker's first chief of staff for nearly three years.

Davis has worked as the deputy director of the Metropolitan Area Planning Council since 2008. There, she oversees the agency's administration, finance and human resource operations, and works to keep their priorities in line with their visionary regional plan; MetroFuture: Making a Greater Boston Region.

Prior to becoming deputy director, Davis served as MAPC's director of Government Affairs, where she developed and led their legislative agenda, including zoning reform legislation, transportation funding, and energy and environmental issues. She also spent time as director of their Clean Energy teams, where she focused on promoting the implementation of renewable energy and energy efficient projects.

Effgen is vice president of the Global Partnerships and Business Team at Nutonomy. She provides team leadership and oversees partnerships, business development, external relations, and recruiting and human capital management. Effgen previously served as executive vice president of Mobility Services at CivicSmart, and was a member of their board of directors.

Effgen also received the Best Strategic Alliance Award for the Zipcar and Ford Motor Company partnership, as well as the Zipcar Innovator Award.

Gómez- Ibáñez is the Derek C. Bok Professor of Urban Planning and Public Policy at Harvard University. He also holds a joint appointment at the Graduate School of Design and John F. Kennedy School of Government. Gómez- Ibáñez also is the chair of the social and urban policy area at Harvard Kennedy School. He also does work as a consultant and public service aid to U.S. government agencies, foreign governments, and private for-profit and non-profit firms.

He previously served as senior advisor to the infrastructure vice presidency at the World Bank, and was a senior staff economist in the Council of Economic Affairs at the Executive Office of the President in Washington, D.C. Gómez- Ibáñez has interests in infrastructure and urban economic development, and infrastructure privatization and regulation. He has published four books, numerous journal articles and papers, and has edited many other writings.

As president of the Union of Concerned Scientists, Kimmell dedicates his time to using scientific knowledge to build a healthier and safer world. He is a leading advocate for UCS's Power Ahead campaign, which is working to build an expansive group of clean energy leadership states.

Kimmell previously served as commissioner of the Massachusetts Department of Environmental Protection, where he helped push nine states to lower carbon emissions. He also worked as general counsel in the Executive Office of Energy and Environmental Affairs during Gov. Deval Patrick's administration, and spent 17 years as the director and senior attorney at a law firm specializing in environmental, energy, and land-use issues.

Rawn is a Cambridge resident who currently serves as the director of transportation for CERES, a Boston based sustainability nonprofit organization. In her role, she works with influential investors and companies to promote sustainable transportation practices and policies. Prior to her work at CERES, she was general counsel for the Executive Office of Environmental Affairs, leading the Clean State Initiative, before moving onto the Conservation Law Foundation, where she worked as an environmental advocate.

Rawn also served as deputy legal counsel for Gov. William Weld, and spent three years before that working as an environmental crime prosecutor with the Massachusetts Attorney General's Office.

McAnneny has been president of the Massachusetts Taxpayers Foundation since 2015. She has more than 20 years of experience in government relations, public policy and advocacy and managerial experience in both the public and private sectors in Massachusetts.

McGourthy is a Worcester resident currently serving as executive director for the Worcester Regional Research Bureau where he directs the research agenda, oversees operations, coordinates forums and events, leads fundraising efforts, and provides support for a 90-member board of directors.

Melnik is a Jamaica Plain resident who currently works as the director of Economic and Public Policy Research at the UMASS Donahue Institute. He focuses on demographic, socio-economic and labor market issues. Previously, he acted as deputy director for research at the Boston Redevelopment Authority, where he led research teams on demographic and economic research. Melnik also worked as a research associate at the Dukakis Center for Urban and Regional Policy.

Quinn is the senior vice president of Global Public Policy for ChargePoint, the world's largest network of electric vehicle charging stations. There, she leads regulatory and government market development activities. In addition, she oversaw ChargePoint's expansion into Europe and represented ChargePoint at COP 21 in Paris, where she accepted the United Nations Momentum for Change Award.

Sawyer Conard is the executive director of the Merrimack Valley Planning Commission. She leads the agency on coordinating the planning and development of 15 communities in Essex County.

Sawyer Conard has more than 28 years of experience in public and private sectors, and an extensive knowledge of state and local government in Massachusetts.

Sheehan is a Hampden resident who currently serves as chief executive officer of the Pioneer Valley Transit Authority. There, she oversees the Authority and its contractors. She previously served as the director of planning and development, and the director of procurement and transit at PVTA.

Prior to her work there, Sheehan worked as director of grants and contract administration at the Greater Hartford Transit District in Hartford, Conn. She played a key role in Hartford's Intermodal Triangle Project, which included the design and construction of improved downtown intermodal connections.

Silveira is senior vice president of ML Strategies, where he assists clients in their interactions with both state and local governments. He was appointed by both Gov. Romney and Gov. Patrick to chair the Commonwealth's Transportation Finance Commission, where he helped make recommendations on how the Commonwealth can finance, maintain and expand its transportation system.

He aided the commission in formulating 28 cost-cutting and revenue-enhancing recommendations. Silveira previously worked at the Massachusetts Bay Transportation Authority as deputy director of real estate, where he oversaw the sale and development of the MBTA's surplus real estate assets. He also led the successful effort to expand the Route 128 Station in collaboration with Amtrak.

Singh is a Weston resident who serves as the managing partner for the McKinsey Boston Office. He previously served as program manager of General Electric's Global Research Center. He is a co-holder and inventor of more than 15 patents, and has been published in In Vivo and Nature Drug Discovery.

Sykes is the head of the Urban Strategy America Fund L.P, providing investors with the opportunity to transform urban and economic development areas. His start came about in the early 1990s, when he worked on the Dudley Street Neighborhood Initiative to develop a 40-unit townhouse in Boston's south end.

Sykes also helped develop the Boston State Hospital site in 1998, which later became the first investment of the Urban Strategy America Fund. He also founded the Robert Taylor Society of Black Architects in, and served as its president. He was appointed by Gov. Baker to serve on the Black Advisory Commission.