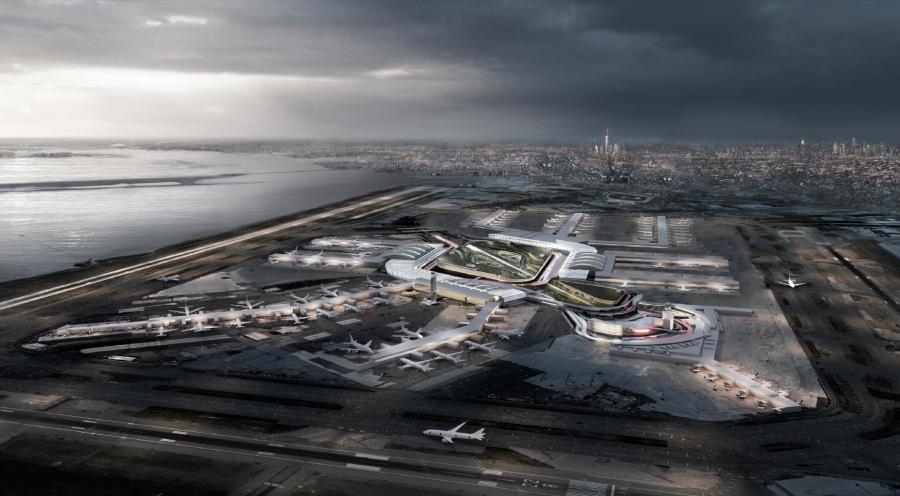 Governor Andrew M. Cuomo today presented a vision plan to transform JFK International Airport into an airport equipped to meet the demands of the 21st century and worthy of the State of New York. Based on the recommendations of the Governor's Airport Advisory Panel, the vision plan lays out a comprehensive, airport-wide framework to create a unified, world-class airport. In order to accommodate the dramatic expected growth at the airport in the coming decades and keep New York's economy moving forward, the Governor today announced that the vision addresses three key areas:

“New York never backs down from a challenge, rather we step up to take on the ambitious projects that are often thought to be impossible. That's exactly what transforming JFK International Airport is all about," Governor Cuomo said. "Our vision plan calls for the creation of a unified, interconnected airport that changes the passenger experience and makes the airport much easier to access and navigate. We are New York, and we remember the bravado that built this State in the first place, and that is the attitude that will take JFK and turn it into the 21st century airport that we deserve. I want to thank the panel, especially Chairman Dan Tishman, as well as all of our many partners who join us in this effort.”

By setting a new course at JFK, the airport has the potential to drive up to $7 billion in private investment. The on-airport transformation focuses on six core areas:

Redesign the on-airport roadways to evolve into a “ring road” configuration, to allow for easier and quicker access to all of JFK's terminals, including for taxis, ride-sharing and for-hire vehicles.

Implement state-of-the-art security technology, including regular reviews with third-party experts to update security to the future global best practices such as facial recognition and video tracking software that are currently being incorporated across New York's infrastructure developments.

The vision plan also addresses key bottlenecks in road access to and from JFK on the Van Wyck and at the Kew Gardens Interchange. Governor Cuomo endorsed $1.5-$2 billion in spending by the State Department of Transportation to improve the roadways leading to JFK. The Panel also recommended the development of actionable plans to expand rail mass transit access to the airport. The Panel laid out options including doubling the capacity of the AirTrain, improving the MTA's subway and LIRR connections to the AirTrain at Jamaica Station, and exploring the feasibility of a one-seat rail ride to JFK.

"We are New York, and we remember the bravado that built this State in the first place, and that is the attitude that will take JFK and turn it into the 21st century airport that we deserve."

JFK Airport welcomes more international passengers to the United State than any other airport in the country. The airport is a vital regional economic engine that served a record 60 million passengers in 2016 and supported more than 285,000 jobs last year.

The need to take action at JFK is the result of the airport's history of piecemeal, ad-hoc decision making. This legacy has produced the airport's current condition with disconnected terminals, an inconsistent passenger experience, facilities that are quickly running out of capacity, on-airport roadways that are confusing to navigate, and an airport that is increasingly difficult to access. JFK is currently ranked 59th among the world's top 100 airports, and falls far short of today's global standards. Without a well-conceived master plan addressing the comprehensive measures outlined by the Panel, New York will fall even further behind global competitors.

“On behalf of the advisory Panel, I want to thank Governor Cuomo for his leadership and support in developing these recommendations to transform JFK Airport,” Dan Tishman, CEO of Tishman Construction Company and Chair of the Governor's Airport Master Plan Advisory Panel, said, “We worked closely with the Port Authority, New York State Department of Transportation, MTA and airline operators to deliver a plan that will benefit generations to come. It was an honor to serve alongside and in partnership these professionals to reimagine the gateways to our state and region.”

Pat Foye, Executive Director of the Port Authority of New York and New Jersey, said, “John F. Kennedy airport was once a world class transportation hub, envied by the entire nation. Today, it is choked with traffic and burdened with outdated systems and decaying infrastructure. Governor Cuomo's landmark plan to revitalize JFK will put New York back on the map as a premiere destination by building a new golden gate to this state. Through strategic investments and collaborative efforts of our public and private sectors, the completion of this state-of-the-art transit center we will meet the needs of 21st century travelers for many decades to come.”

New York State Department of Transportation Commissioner Matthew Driscoll said, “Getting people to and from the airport is an essential part of the passenger experience and we look forward Governor Cuomo's vision to improve roadway access to JFK a reality. By eliminating bottlenecks and adding capacity we'll reduce drive times and vehicle emissions and divert traffic away from local streets – all of which makes JFK a better airport and by extension enhances New York's global economic competitiveness.”

MTA Chairman and CEO Tom Prendergast said, "Expanding access to mass transit and our capacity to move people efficiently and comfortably is critical to the region's growth – and we are grateful Governor Cuomo is making rail access a priority in the transformation of JFK Airport,”"The easier mass transit is to navigate, the more people will use it. The plan to overhaul of Jamaica Station and improve connections to airport access will encourage people to get out of their cars, helping to reduce traffic congestion and pollution - and that helps all of us."

Governor Cuomo and the Panel's vision will turn the airport into a modern, state-of-the-art facility that puts the passenger first. Overall, this calls for a more efficient use of land within the airport's central terminal area and includes the following recommendations for action to better position JFK to meet today's standards for a leading global airport:

A core feature of the Panel's recommendations is that each project move forward within the framework of a terminal configuration that's more unified and makes it easier for passengers to connect between terminals.

Interconnected Terminals: Expanding newer terminals and redeveloping and relocating older ones. As the new terminals expand they should be designed to connect to neighboring terminals as much as possible. As older terminals are rebuilt and redeveloped, the planning should take into account the vision of a unified airport.

Fixing JFK's On-Airport Roads and Parking: The vision plan details the need to untangle the confusing spaghetti-network of on-airport roads that lead to multiple bottlenecks and chokepoints. The plan underlines the need to transform this web of roadways with multiple chokepoints and bottlenecks into a “ring road” approach allowing for easier and quicker access to all terminals including for taxis, ride sharing, and for-hire vehicles. Additionally new centralized parking lots within the “ring road” will allow for clear, airport-wide short term and long term parking options.

Creating a Set of Standards for Amenities: As terminals are redeveloped and expanded, the vision calls for ensuring that they have a consistent set of high standards ensuring world-class amenities. These amenities should include fine dining, duty-free shopping, best-in-class retail, and conference and meeting room facilities. This process began last month with the groundbreaking of the new TWA Flight Center Hotel. Last month, Governor Cuomo, together with New York-based hotel investment firm MCR, broke ground on the redevelopment of the legendary TWA Flight Center at JFK International Airport.

Airside Improvements: The vision plan calls for expanded taxiways that will result in fewer ground delays, and working with the FAA to increase the airport's number of flight slots to accommodate the airport's passenger growth.

Securing JFK For the 21st Century: The vision calls for implementing state-of-the-art security technology and regular reviews including participation of third-party global experts, to assure the airport's security technology is in line with the latest global best practices.

A joint state-federal review team recently developed a series of recommendations to improve emergency response and enhance safety at JFK. Based on the review, New York is implementing four security recommendations:

1. Establishing a single, unified operations protocol for all security forces on the premises.

First in the nation program is already underway; the first session was held on December 20.

Public Art – JFK Gateway Design Competition: In the last six years, New York State has restored its commitment to public art. As the next element of this vision, the Governor today announced a design competition at the 20 crossings over highways that lead out of JFK to use public art to welcome travelers to New York and the region.Under the leadership of Governor Cuomo, the State has recaptured the bold ambition of incorporating art into infrastructure projects –including the largest permanent public art installation in New York history along the Second Avenue Subway.

The Panel's vision plan indicates how the transformation can drive up to $7 billion in private investment. Much like the successful LaGuardia Airport redevelopment project, the Panel believes there is the potential to leverage significant private sector investment to deliver a new JFK. At LaGuardia Airport, two-thirds of the over $8 billion being used to construct new facilities is paid for by the private sector.

Reduce Congestion and Improve Road Access to the Airport

Today's travel times to JFK are unpredictable and range anywhere from 35 minutes to two hours. Governor Cuomo is directing the New York State Department of Transportation to undertake $1.5-$2 billion in improvements to address two major bottlenecks.

One of the most significant problems in accessing JFK is the bottleneck at the Kew Gardens Interchange between the Grand Central Parkway, the Van Wyck Expressway, the Jackie Robinson Parkway and Union Turnpike. The State Department of Transportation will expand lane capacity at the interchange between the Grand Central and Van Wyck and expand the existing connector ramps in both directions from two lanes to three lanes on new connector ramps in each direction.

On the Van Wyck Expressway, DOT will increase the number of lanes from three lanes in each direction to four lanes within the highway's existing right-of-way. These two new lanes will be a “managed use lane” to allow for adjustments depending on demand – including for express bus or HOV service.

These enhancements to New York's roadway network will have significant benefits:

Changes to Grand Central/Van Wyck interchange and the Van Wyck itself will save motorists a combined travel time of 7.4 million hours annually going to and from JFK.

Reductions in traffic will directly improve air quality by cutting emissions and reducing fuel consumption. These changes will cut emissions an estimated 30 percent, save 10.8 million gallons of fuel and $27 million.

Diversions of highway traffic away from local streets will reduce disruptive noise and congestion in the surrounding community.

Since opening in 2003, the JFK AirTrain has surpassed all ridership projections. In response to the dramatic growth of the number of passengers at JFK, expanding rail mass-transit capacity is a priority. The Advisory Panel's vision plan calls for consideration of two ways to improve rail mass transit to JFK.

Increase the capacity from two to four cars per train and increase its frequency - These changes would allow the AirTrain to roughly double its capacity and handle more than 40 million passengers annually.

Improve the east of connection from the Subway or LIRR by top-to-bottom rebuild of interconnections at Jamaica and Sutphin Blvd – Completely overhaul the subway and Long Island Railroad connection to the JFK AirTrain. These improvements would include essential modern amenities such as high-performance elevators and escalators, charging stations and expanded walkways. A modernized mezzanine will create simpler navigation and smoother transfers to the AirTrain including improved wayfinding and LED flight status screens. Images of the transformed Jamaica Station and AirTrain connection can be found here.