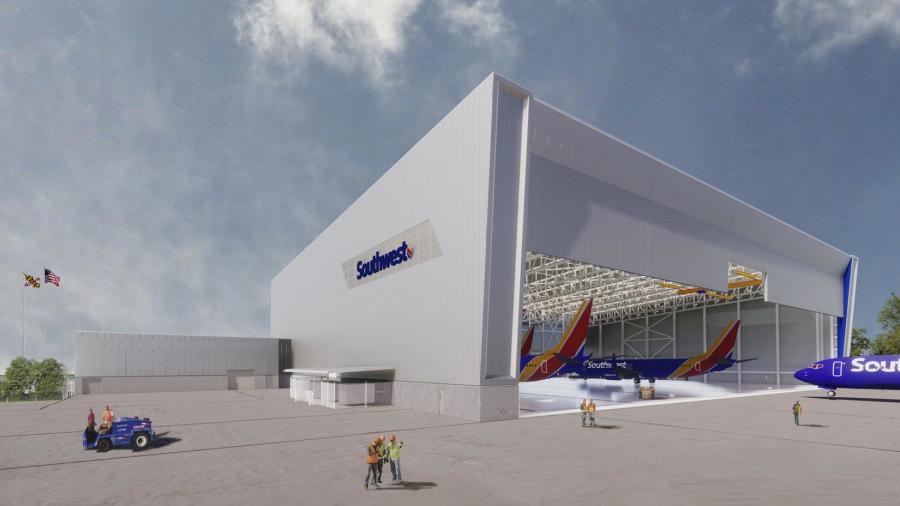 The facility could accommodate three aircraft, and the exterior apron space could support up to eight aircraft. (BWI Airport photo)

Gov. Larry Hogan and Maryland transportation leaders joined Gary Kelly, chairman of the Board and chief executive officer of Southwest Airlines, to announce that Southwest plans to construct and operate a major aircraft maintenance facility at Baltimore/Washington International Thurgood Marshall Airport. The announcement that the airline's first maintenance facility in the Northeast will be located at BWI affirms Southwest's continued commitment to Maryland. The project is expected to create 450 construction and maintenance jobs over the next three years, supporting hundreds of additional maintenance jobs over the next two decades.

“For four years, our administration has been doing everything we can to showcase Maryland's incredible assets, which is why we are so fortunate to be home to the number one airport in the Washington-Baltimore region and to one of the best, most convenient, efficient, and thriving airports in the nation,” said Hogan. “We are proud to strongly support BWI and Southwest, and will continue to encourage the growth and success of this important partnership as we work hard to create the very best airport, highway system, Port, transit and transportation infrastructure network in the nation.”

The proposed airline maintenance facility would include an approximately 130,000 sq.-ft. maintenance hangar, aircraft parking apron and office space. The facility could accommodate three aircraft, and the exterior apron space could support up to eight aircraft. Pending approval from the Federal Aviation Administration, the preliminary schedule calls for construction to begin in 2019, with a scheduled completion in late 2021. The total cost of the Southwest Maintenance Facility is $130 million, with $80 million from Southwest to build the maintenance facility and $50 million from MDOT Maryland Aviation Administration to build infrastructure improvements such as utility work and site preparation.

“We continue to appreciate the great relationship with the state of Maryland and the Maryland Aviation Administration, and we thank them for the support over the past 25 years,” said Southwest Airlines Chairman and CEO Gary Kelly. “This facility will be Southwest's first Maintenance Hangar in the Northeast and will support our more than 120 Technical Operations Employees with performing existing line maintenance work at Baltimore/Washington International Thurgood Marshall Airport.”

“The growth of Southwest Airlines here over the past 25 years has been remarkable,” said Ricky Smith, executive director of BWI Marshall Airport. “We thank our airline partner as we work together to support tourism, trade, and business development.”