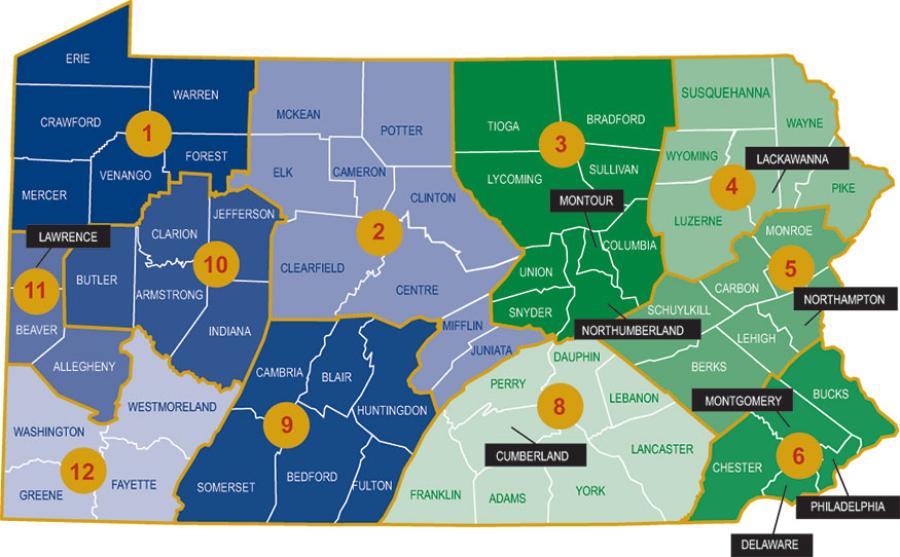 A full list of projects is below. Some examples include:

• Creation of a pedestrian and bicycle trail under Route 263 in Warwick Township, Bucks County;

• Improvements for pedestrians and transit riders along Beaver Drive in DuBois, Clearfield County;

• Pedestrian improvements at Keystone College in Lackawanna County and Wilkes University in Luzerne County; and

“Supporting transportation alternatives in our communities is vital to a transportation system that works for all Pennsylvanians,” Richards said. “These investments complement our state multimodal funding to ensure we're making connections that improve citizens' quality of life no matter how they travel.”

Moving Ahead for Progress in the 21st Century, the 2012 federal transportation authorization act known as MAP-21, introduced fundamental changes to the administration of local programs, including those that had existed as separate programs in SAFETEA-LU, the previous authorization act. Transportation Enhancements, Safe Routes to School, Scenic Byways and the Recreational Trails Program (RTP) are now consolidated into the Transportation Alternatives Program (TAP)

PennDOT evaluated the applications and made selections based on such criteria as safety benefits, reasonableness of cost, readiness for implementation, statewide or regional significance, integration of land use and transportation decision making, collaboration with stakeholders, and leverage of other projects or funding.

• Mount Oliver Borough — $745,714 for a streetscape project along Brownsville Road in Mt. Oliver that includes numerous improvements to the Business District, including new sidewalks, ADA curb ramps, sharrows, and a consistent streetscape design.

• Reading — $910,099 to create a trail segment for the Schuylkill River Trail through Reading from Reading Area Community College to Buttonwood Street, providing a safe, easily accessible, clearly marked and signed trail in the city of Reading.

• Altoona — $460,000 for repair of deteriorated steps and decking on the 12th Street Pedestrian Bridge.

• Warwick Township — $500,000 to create a pedestrian/bicycle trail under Route 263 to allow visitors access to recreational and cultural amenities near Moland Park.

• New Britain Township — $375,000 for construction of the Neshaminy Greenway Trail (NGT) from Lenape Lane to Upper State Road. The trail will be an ADA compliant shared use path, and will complete a missing link in the NGT, providing a connection to the 202 Parkway Trail.

• Slippery Rock Township — $138,000 to widen a paved shoulder and create a striped buffer with reflective markers separating the designated walking path from the cart way along Harmony Road.

• Zelienople Borough — $465,000 for comprehensive updates to the west side of Main Street between Beaver Street and Spring Street. Improvements will include new concrete sidewalks, curb/gutter, ADA ramps, and lighting.

• Adams Township — $145,735 to create a safe route through the Creslo neighborhood to an existing Forest Hills School Campus.

• Downingtown Borough — $916,600 to install a 10-ft.-wide multi-use trail along Woodbine Road and a 6-foot-wide sidewalk along a portion of Lincoln Highway.

• DuBois — $700,000 to extend the walkway and provide bus pull off areas along Beaver Drive in the Industrial Park.

• Meadville — $219,940 for repair of the footbridge crossing Mill Run, which is a popular route for school children and on the proposed Ernst Trail, closed in 2014 due to structural deficiencies and safety concerns.

• Chester — $913,488 for the Avenue of the States streetscape project, which includes sidewalk and streetscape improvements in Chester's Central Business District.

• Radnor Township — $1 million for construction of the Radnor TAP Trail, which will provide a 5-mi. (8 km) north/south circuit route through nearly all of the township to create a nearly continuous 7.6-mi. (12.23 km) on-road and off-road bicycle route.

• Erie — $175,745 for concrete sidewalk and curb removal and reconstruction with associated streetscaping (landscaping and trees) along West 18th Street between Poplar and Liberty Streets.

• Redevelopment Authority of the city of Uniontown — $999,350 to replace sidewalks, add crosswalks, and create ADA-accessible ramps to improve safety and enhance the Historic District for both residents and visitors in the downtown.

• Lancaster — $962,378 to install a pedestrian bridge over the Conestoga River, reconfigure fencing on the existing bridge to accommodate bicyclists, and construct ADA accessible trail approaches to provide a connection between two open space areas.

• West Earl Township — $999,810 to replace curbs, install sidewalk and construct ADA curb ramps on East Main Street. Additionally, a flashing pedestrian signal will be constructed at an existing crosswalk at the intersection of West Main Street and Charles Place.

• Lebanon County — $575,000 to construct the Lebanon Valley Rails-to-Trails (LVRT) bridge over Swatara Creek and a small section of LVRT in Union and Swatara townships.

• Macungie Borough — $542,288 for traffic calming and safety improvements to Macungie's downtown gateway — encompassing one block of pedestrian lighting, trees and pavers (both sides) and one median island centered on Route 100.

• Allentown — $297,274 for pedestrian safety improvements at a high-volume intersection adjacent to the Allentown School District's new public high school and adjacent to the “Connecting our Community” MLK Parkway Trail, which connects the downtown to the city's western park resources.

• Wilkes University — $1 million for pedestrian and streetscape improvements on South Franklin Street and South Main Street in the city of Wilkes-Barre.

• Williamsport — $798,500 for phase four of the Williamsport Pathway to Health Project – a multi-phased streetscape and safety improvement project in the city of Williamsport.

• Cheltenham Township — $700,000 to construct a 1-mi. (1.6 km) segment of phase three of the Tookany Creek Trail, which starts at Harrison Avenue and ends at New Second Street and includes a 135-ft. (41 m)-long pedestrian/bicycle bridge over Tookany Creek.

• Sunbury — $640,000 for renovations to Chestnut Street to improve pedestrian safety on Truck Route 61 in the city of Sunbury. Improvements include replacing sidewalks, curbs, and ADA curb ramps.

• Philadelphia — $1 million to construct a .6 mi. (.96 km), 12-ft. (3.7 m)-wide trail with landscaping and site amenities along the Delaware River between Magee Avenue and Princeton Avenue. The project is part of the East Coast Greenway.

• Philadelphia — $600,000 to remove slip ramps for eastbound and westbound Baltimore Avenue, which is the school crossing guard location for Avery D Harrington School. The project will also include green infrastructure with a subsurface stormwater retention system, signal upgrades and bump-outs.

• Philadelphia — $250,000 to convert over 17 lane miles into protected bicycle facilities by adding flexible delineator posts, a vertical element proven to better visually and clearly separate vehicle and bicycle space in the right of way.

• Lanesboro Borough — $578,200 to replace deteriorated sidewalks along North Main Street in the borough and construct sidewalks along Tannery and Depot Streets adjacent to the Historic Starrucca Viaduct.

• Charleroi Borough — $975,000 to address deficiencies in stormwater above and under Route 88 in combination with a PennDOT betterment project.

• Nicolson Borough — $630,000 to renovate and replace sidewalks, curbing, ADA ramps, and street lighting within a two block section of the downtown business district.

• York County Rail Trail Authority — $883,800 for construction of a pedestrian/cycling bridge and ramps over the Codorus Creek at Emig Road as part of Northern Extension of Heritage Rail Trail County Park.