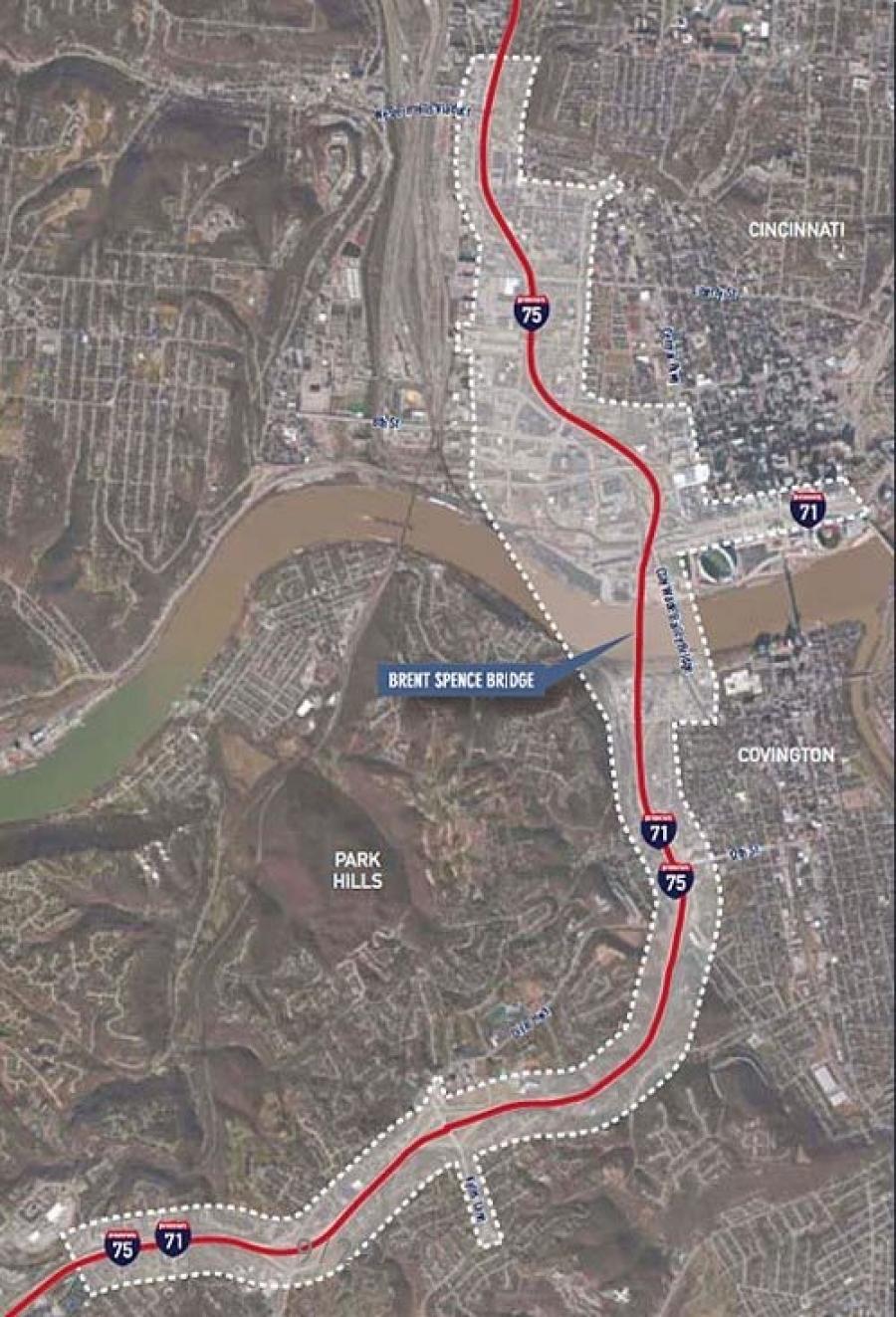 Ohio Gov. Mike DeWine and Kentucky Gov. Andy Beshear announced Feb. 28 that they will jointly pursue up to $2 billion in federal funding to drastically reduce traffic congestion on and around the Brent Spence Bridge, which connects Cincinnati, Ohio, to Covington, Ky.

During a public briefing in Covington, the governors announced plans to request up to $2 billion in funding from the U.S. Department of Transportation (USDOT) for the long-discussed Brent Spence Bridge Corridor Project.

The funding is part of the bipartisan federal infrastructure bill, which includes at least $39 billion for bridge projects. If awarded to Ohio and Kentucky, the requested funds would primarily be used to build a new companion bridge over the Ohio River to give drivers an alternative to the Brent Spence Bridge.

"For decades, the backups on the Brent Spence Bridge have frustrated drivers, hindered economic development and slowed supply chain deliveries. Today, a solution is in reach, and we are committed to aggressively working together to secure this funding to help us fix this transportation nightmare once and for all," said DeWine. "Not only will this project improve quality of life for drivers in Ohio and Kentucky, but keeping this major transportation network open and moving also will have a significant positive impact on our national economy and national security."

As part of the announcement, DeWine and Beshear signed a memorandum of understanding confirming the states' intention to work together on the bridge project. The memorandum also directs transportation officials in both states to begin preparations for construction. A more detailed interstate agreement will be signed later this year.

"With today's signing, the commonwealth of Kentucky and the state of Ohio are aligning our efforts to make this project a reality," said Beshear. "This memorandum spells out our obligations and positions us to quickly apply for these federal dollars, which will allow us not only to build this new bridge — but to do it without tolls. And just as important, this project shows what we in government can do when we embrace cooperation and progress and simply do what is best for our people."

The Brent Spence Bridge was constructed in the 1960s to carry around 80,000 vehicles a day, but the daily I-75 and I-71 traffic load has reached 160,000 vehicles in recent years. Because I-75 is a key freight corridor stretching from Canada to Florida, the slowdowns also impact commerce throughout the eastern United States.

The teams at the Ohio Department of Transportation (ODOT) and Kentucky Transportation Cabinet (KYTC) have been planning the Brent Spence Bridge Corridor Project for nearly two decades, completing the critical groundwork that has made this project nearly shovel ready. Because of this previous planning, project construction could potentially begin in 2024 if funding is received.

"The signing of this document is a very clear and public show of action by both states," said Jack Marchbanks, director of ODOT. "This critical step will help be competitive in the federal grant process and will allow the bi-state team to start moving this project forward."

"The Brent Spence Bridge is the critical link in this important corridor," said Jim Gray, secretary of KYTC. "New funding will support the construction of a new bridge — not a replacement — as well as updates to the existing bridge and the interstate network throughout the corridor. The Brent Spence Bridge is safe and structurally sound and will serve a critical transportation need for decades to come."