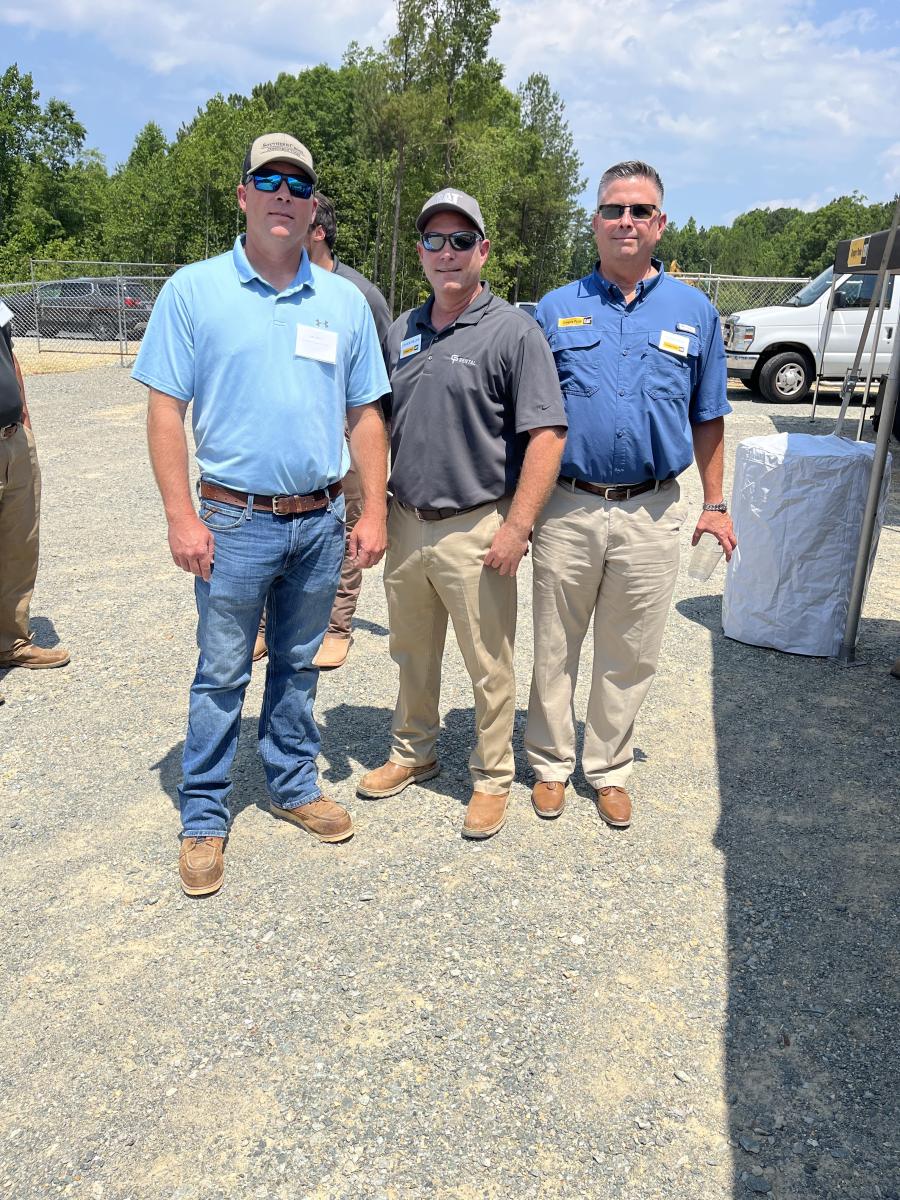 At the construction site of a gigantic new biotech facility in Holly Springs, N.C., contractors now have quick-time access to a facility that can supply the equipment and services they need to keep the project running apace.

The ultramodern large-scale cell-culture facility is scheduled to open in 2025, where it will develop, produce, package and ship next-generation therapeutics, the Japan-based company announced in fall 2021.

From this location, GP Rental will supply Caterpillar heavy equipment to the contractors working on the project. Additionally, the rental office will offer an assortment of Allied products, such as aerial equipment, light towers, power generator sets and other support equipment.

The new GP Rental office and equipment yard, at 501 Green Oaks Parkway, near the intersection with Holly Springs New Hill Road, is an around-the-corner stop for the big-budget project site. Before, if the Fujifilm Diosynth builders needed equipment, they would have a lengthy wait as the nearest GP Rental facility was more than 20 minutes away — and that is without traffic, an unlikely drive time considering Raleigh's notorious road congestion.

According to Rob Jackson, director of sales of Gregory Poole, the decision to open GP Rental as a temporary office at the Fujifilm Diosynth construction site was always seen as offering a service to the builders.

"We want to be able to supply [them] with as much Cat equipment as we can, but also provide all the support equipment they may need." 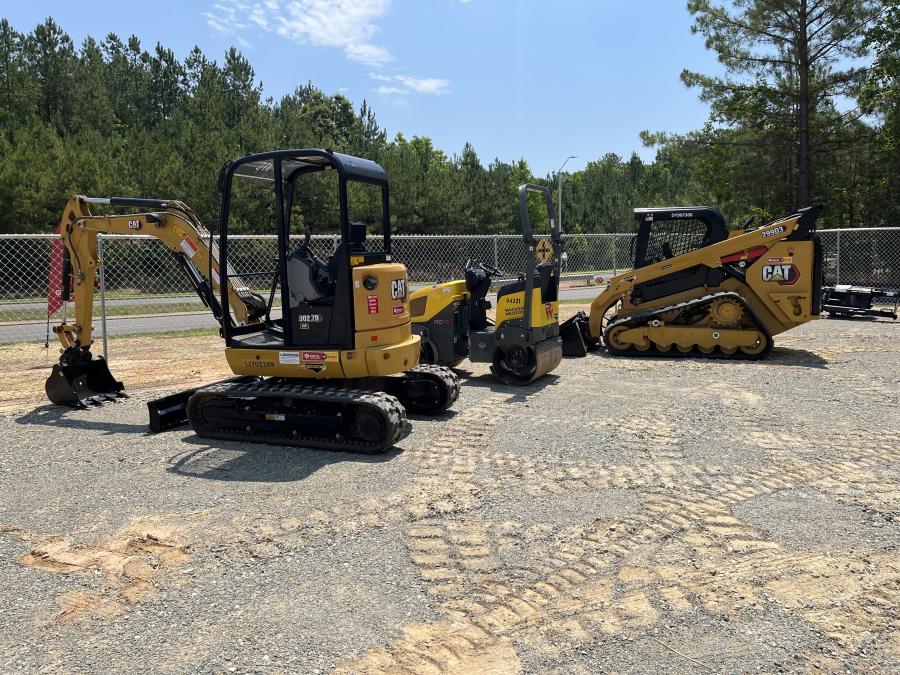 Having just gotten electrical power at the GP Rental trailer the last week of May, Jackson said that the company is still working to bring in more Cat machines and Allied equipment.

"GP Rental will eventually be stocked with a couple hundred pieces on this job site," he said. "Of course, machine availability is a big challenge right now. That is why you only see about 10 pieces. But we will have the ability to quickly turn around a machine because we have a technician on hand as well as a wash pit."

In addition, the GP Rental store will have a selection of safety gear for folks working on the job, he added.

GP Rental Sales Manager Blake Rogers said, at the peak of construction, a job the size of Fujifilm Diosynth will require more than 2,000 pieces of equipment, "and we are looking to supply a portion of that. Being closer to the project and our customers [building here] gives us a better opportunity to do so."

"Today, within walking distance of where we are standing, there is $2.2 billion of construction that we never have to leave the highway to reach," he said. "In addition, there is The Yield, another bioscience project worth $200 million. That development is on Green Oaks Parkway, with the Fujifilm Diosynth project farther back off the road. Being close to these projects is going to be advantageous to us, and there is more work planned in the future for Holly Springs."

Rogers noted that the idea for the onsite GP Rental facility came from Greg Poole IV, who currently runs the rental operation for his family's longtime equipment dealership.

Poole, as it turns out, is also responsible for the name change.

Gregory Poole Equipment decided to rebrand its former Cat rental division to GP Rental at the beginning of 2022, Jackson said, with the idea of making it a standalone division from the larger company's sales department and better compete with some of its more dedicated rental competitors.

"And with that, we are looking to have a bigger fleet and a broader range of equipment readily available, like aerial equipment" he said. "Before, we were more of a Cat supplier on the rental side; now we want to be more of an all-encompassing rental store."

Poole said that the idea was to differentiate GP Rental from the Gregory Poole name, while still paying homage to the original and dynamic company. 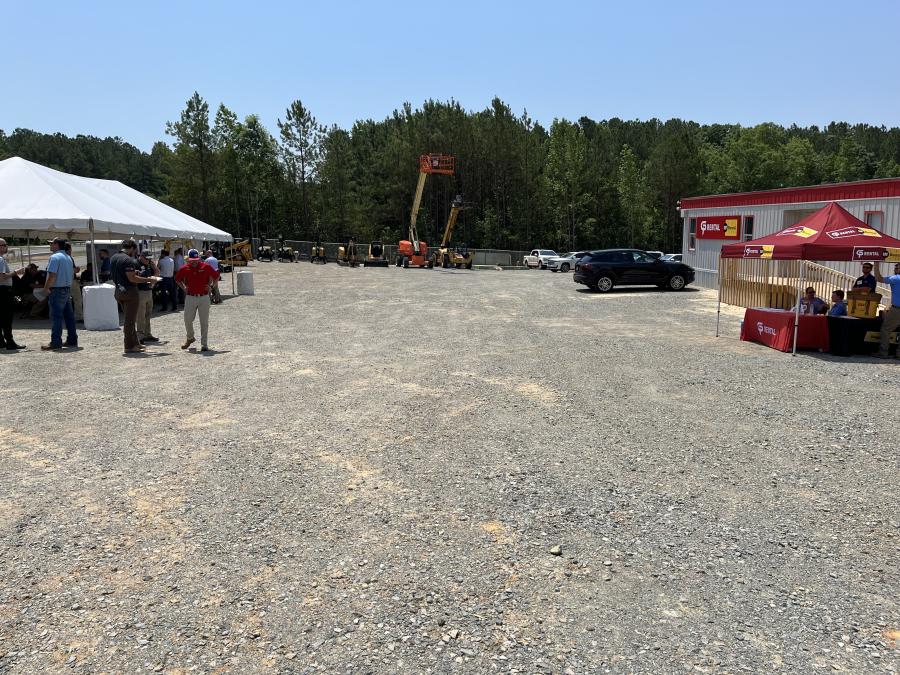 "I think GP Rental has done very well so far, and we have some brand awareness. Nine out of 10 customers know that the ‘GP' stands for Gregory Poole, and ‘Rental' means we are solely focused on that part of the equipment business."

He admitted that he knew his brainchild "was kind of a far-fetched idea to begin with, but we had gotten some fresh blood in our rental team and were able to get some momentum going."

Once Poole learned that the proposed Fujifilm Diosynth plant was to be the largest development ever in North Carolina when it was announced, he and his team began trying to discover who owned land around the facility's industrial park.

In a bit of good luck, Poole found that the owners of the surrounding properties "were good friends of ours who are involved with Caterpillar, so we sat down with them about a year to 18 months ago to discuss putting a temporary rental location" by the entrance to the construction site on Green Oaks Parkway.

"Here we are more than a year later, and we have about 30 pieces on rent," he said in late May. "The Fujifilm Diosynth project is still in its very early states — about 10 percent complete — so our activity in this yard will ramp up considerably in the next few months as [building increases]."

He believes that GP Rental will offer a rich variety of different machines as the construction gets busier.

"Obviously when people think of a Cat dealership they think of earthmoving equipment, but whether GP Rental has a location here or not, we are always going to be the first ones on site moving dirt," Poole said. "But what we are trying to capture more on this site than what we have been able to do in the past is the [rental market] for non-Cat equipment — the scissor lifts, boom lifts, telehandlers and trench rollers — the pieces you typically see utilized on the job site once the project starts to go vertical."

During the dedication of the GP Rental facility in Holly Springs, Poole summed up the intention of his unique idea to a group of guests by saying, "the reason we are here is because we are a family-owned and operated business and have been in the Triangle for over 70 years now."

He noted that while the Triangle region of North Carolina has grown significantly since his family's business started in 1951, the area has only been the scene of "unprecedented growth" just in the past few years.

All that expansion, Poole said, "coupled with supply chain shortages, labor shortages and all the environmental challenges from a business perspective that we deal with every day makes it difficult sometimes to build in the Raleigh area. But we are out here to be good stewards of the community, and we want to facilitate growth here."