Grade A Mobile Impactor, Screen Create Fill on the Spot 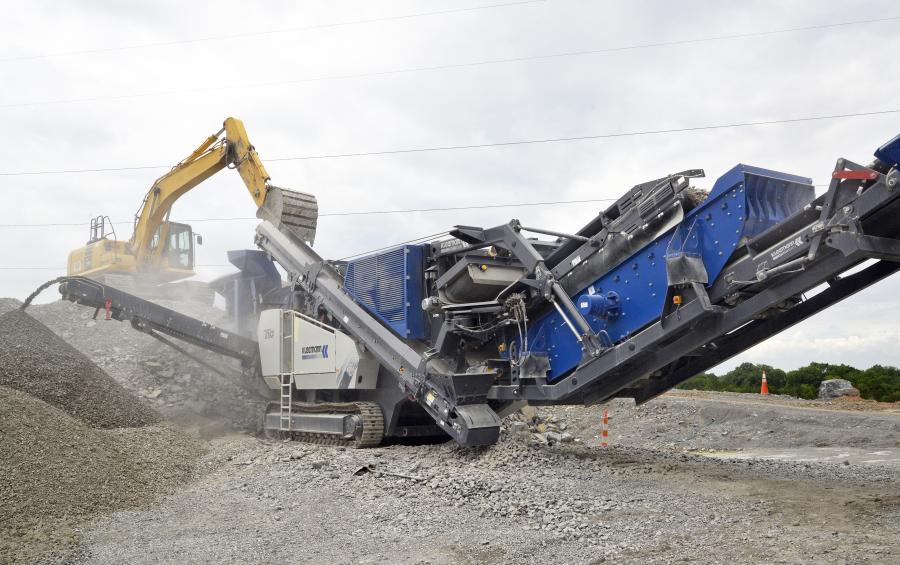 A startup general-site work contractor has added a mobile impact crusher and mobile screen to its fleet to leverage expansion in the booming middle Tennessee region and to “fill” the need for fill on job sites on rough terrain.

“We have quickly developed into a major player in our Nashville market, and our experienced staff and depth in the field has been the key to our rapid growth,” said Rachelle L. Reigard, president, Grade A Construction LLC. “When you combine the experience of my vice president of operations, Lance Lannom, with my business background, we are well-situated to grow as the Nashville area continues to expand.”

Grade A began by doing only site clearing and grading, but it has expanded to utilities, drilling and blasting, site concrete, on-site crushing, directional boring, retaining walls, asphalt paving and slipform concrete paving. In 2017 the company had about 140 employees year-round.

“We offer the advantage to clients of being able to incorporate all these capabilities into one bundle,” Reigard said. “Being able to work with fewer subs puts clients in a nice spot to get everything done. The more services we incorporate into our bids, the more likely we are to be successful.”

Rugged middle Tennessee borders the Cumberland Plateau and, further east, the Appalachian Mountains, and is hilly with steep ravines and creek valleys. As a result, most level areas were developed long ago, and now much construction requires removal of hillsides, bluffs and expansion of the few flat areas into hills. That kind of drilling and blasting as an adjunct of site development has become Grade A's forté.

“The problem with Nashville right now is that all good, level sites are gone,” Reigard said. “The only sites left are those with lots of rock, heavy grade changes, and in need of a of unique excavation. Almost every job we come across needs that kind of work.”

“We were subbing the crushing out initially, but found we had more control doing it ourselves,” Reigard said. “Doing our own blasting on site provides our grading crews excellent material to repurpose. Now we can keep the material on site, crush it, screen it, and turn it into valuable products that can be used for the project while eliminating costly hauling expenses.”

Processing the shot material at the construction site using mobile equipment is an environmentally sound application, as it eliminates the long train of truck traffic hauling material out and in, thus cutting down on traffic tie-ups, exhaust emissions and fuel consumption. Yet it results in virgin material being available on site for fill.

Prior to the aggregate processing equipment, after removal of the unwanted material, Grade A would have to buy processed aggregate to fill behind retaining walls. 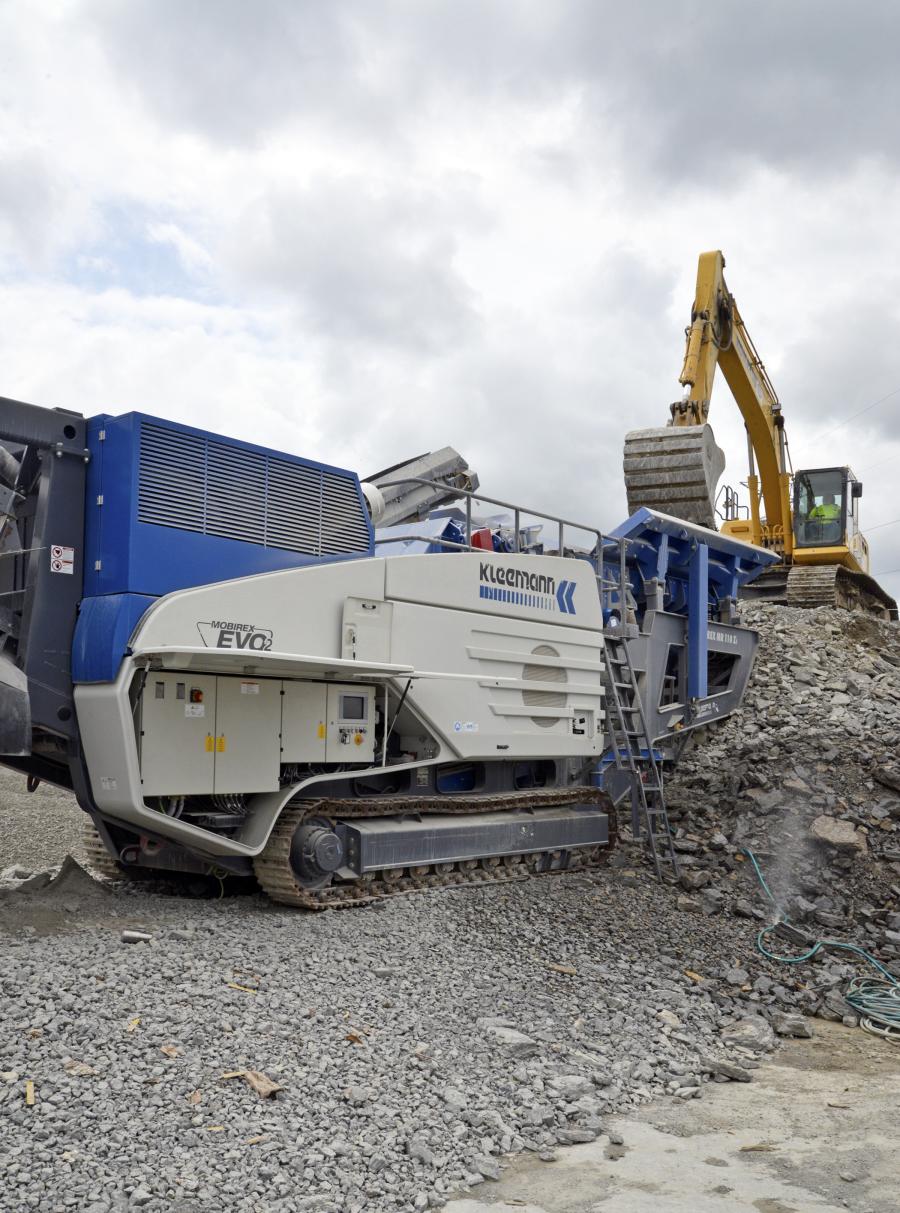 “The segmental retaining walls that we construct require a specific size of stone, and with our Kleemann equipment we can adjust the parameters to exactly what we need,” Reigard said. “Retaining walls take a 'ton' of that stone, and we make exactly what we need right there. If we need fill elsewhere — for example, parking lot bases, building pads or ditches — we just set the equipment for the sizes we need.”

“The Kleemann crusher works great in our day-to-day grading activities, because we have so much on-site waste that we are turning into valuable product, eliminating haul-off and haul-in, both being major expenses,” said Lance Lannom, vice president of operations. “It cuts down tremendously on material being imported. In a recent project in Nashville, we cut out tens of thousands of truckloads being hauled up and down city streets, eliminating wear to pavements, which benefits taxpayers.”

“We are doing what's best for the environment,” said John Alan, in charge of client development for Grade A. “The Kleemann products allow us to take previously unusable material and utilize it in a new way. The reality is not everyone can do that. But it gives us a competitive advantage while being the right thing to do for our society and valued customers.”

When there is a need for a high volume of fill material, the Kleemann impactor steps up to the plate.

“If we have too much shot material, and we have the impactor on the site, we'll take the screener out from in front of it, turn the crusher wide open, and we'll blow material right through,” Alan said. “The resulting fill material is crazy-stable, and it gives us a clean site. Instead of bringing in dirt, having it turn to mud and being tracked out onto the road, we just take the 6-in. minus crushed rock and spread it around, keeping employees working.”

Bramco is the crushing equipment distributor for Grade A Construction.

“Bramco maintains our Kleemann equipment,” Reigard said. “If it needs service, we just make a phone call and Bramco keeps us running.”

Reigard has found it helpful to send employees to Kleemann training at the Center for Training and Technology (CTT), located on the grounds of Wirtgen America's North American Campus in Antioch, Tenn.

“We've had training for employees multiple times, and our staff comes back knowing exactly what to do, what not to do, and how to keep up the maintenance for ourselves,” she said.

Grade A's purchase of the Mobirex impactor and Mobiscreen screen followed an intensive investigation of what would work right for it.

“We tested certain manufacturers and ran the equipment side by side,” Reigard said. “Kleemann far surpassed the other companies as far as production, efficiency, and durability.

“In working with it, we saw it was heavier and more durable. It didn't jam as much on the oversized material like its competitors. All the companies were very generous to let us use their equipment in the demos, but we kept coming back to Kleemann.”

Initially, Grade A rented the Kleemann crusher and screen, but rapidly converted them to a purchase. 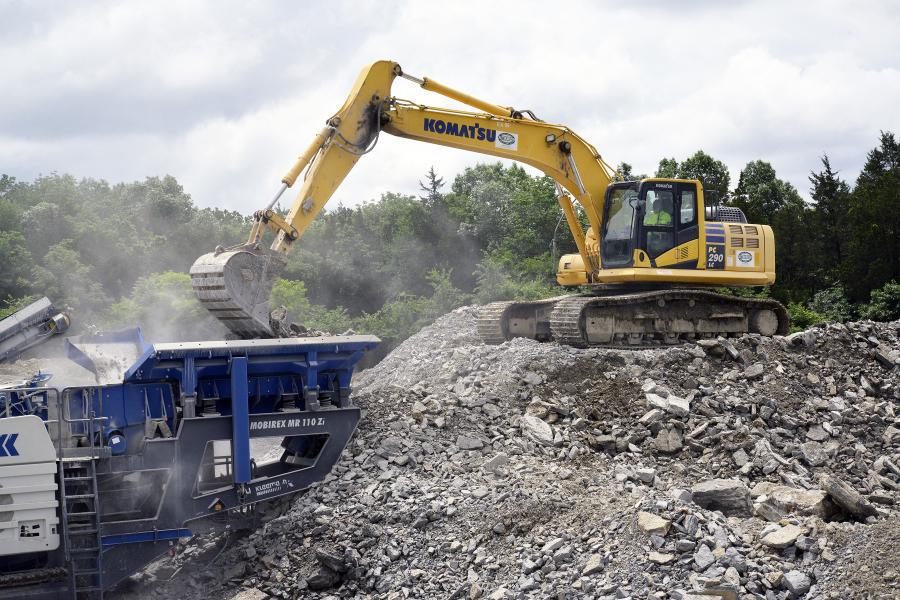 “We really didn't have an idea how much we would use the Kleemanns until we started using them,” Reigard said. “We put it on the first job and realized we were keeping it busy all day, every day. And as soon as we finished that first job we had another place for them. We realized this would not be something that we would need every once in a while. We could keep it busy all the time with the types of jobs we were doing.”

Grade A chose the impactor for its flexibility: in addition to processing shot rock, it could handle demolition concrete and reclaimed asphalt pavement more efficiently than a jaw crusher.

“Demolition material goes right through, and the crusher separates the metal the way it's supposed to,” Alan said. “We feel the impactor produces a tighter spec than a jaw crusher. At the end of the day, a jaw crusher only gets down to a specific size. The jaw crusher will just crush; if we wanted the big stuff, we'd get a jaw. The reality is that the impactor gives us versatility. We can't make the huge stuff, 6 in. plus, but where we want to be is in the smaller-size stone market, because that's where we can utilize the vast majority of the stone on site.”

The result is value-added aggregate sizes.

“It makes a more expensive product,” Reigard said. “When teamed with the screen, we can make anywhere from three to five products coming out of the machines.”

And if Grade A needs as few as three products, it can decouple the Mobiscreen from the circuit and use the conveyor-mounted screen to produce sizes, feeding the 2-in. oversize back into the crusher until the desired gradation comes out the other end.

“We will refeed the tar out of it!” Alan said.

The MS 15 Mobiscreen was acquired to increase the amount of aggregate processed beyond that of the Mobirex MR 110 Zi S EVO2's conveyor-mount screen.

“The conveyor-mount screen was sufficient, but we could not get as much granular material as we wanted,” Alan said. “You could try it, but you would work the machine to death. Kleemann suggested the MS 15 as the best partnership; the advantages of getting the Mobiscreen far outweighed not having it on a project.”

“The prescreen cleans the feed, keeping dirt and unusable fines out of the crusher,” Reigard said. “I can't emphasize that enough. If you had seen the first project we had that machine on, the dirt/rock mix pile we processed came out as gray stone. We ran that machine head to head against other makes, and they could not produce the same result.”

When visited, Grade A was producing 1 1/2-in. stone, 3/4-in. stone and 3/8-in. minus. The independent prescreen in the Mobirex MR 110 Zi S was removing all dirt from the feed ahead of the impact crusher. The crusher was feeding all crushed material to the conveyor-mounted “hanging” screen with single 2-in. deck.

Below, plus 2-in. oversize was circulating back to the impact crusher via enclosed external belt, while minus 2-in. material was forwarded to the MS 15 Mobiscreen. 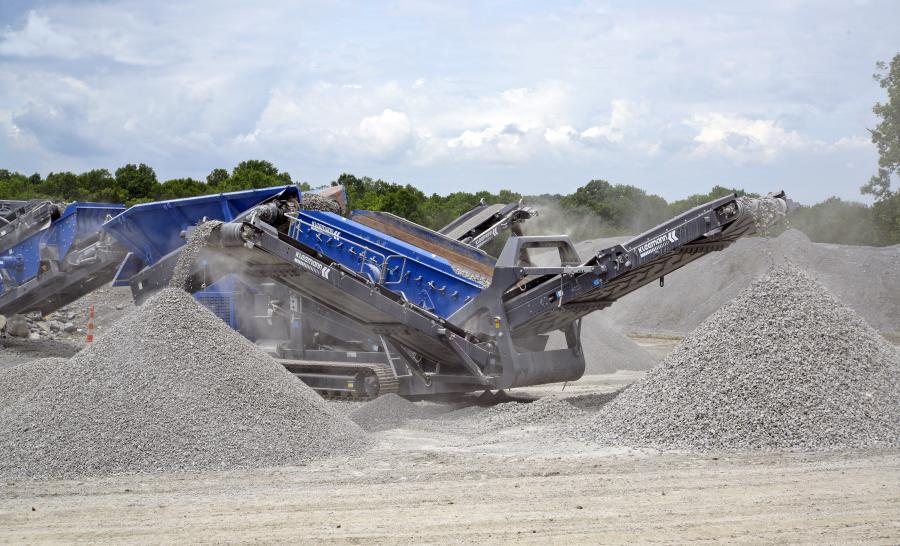 Kleemann's efficient dust control system also was a plus.

“The dust control was a real selling point,” Reigard added. “That's a huge issue around here, because there are not a lot of open sites left in Nashville, and we often are working right next to housing. Environmental inspectors visit and must approve of the setup before we can begin. Last fall of 2016 — when we were running it during a dry spell — the dust could have gotten out of hand, but the spray system cut the dust by two-thirds compared to the other models. We just can't do it with other products.”

Also protecting against dust intrusion is the cushion-mounted control panel, which has an air-overpressure system within to keep dust out. And the automated zero-point gap setting technology on the impactor saves time at startup and later in the day, when readjustment of the gap may become necessary, Lannom said.

“Kleemanns have excellent technology,” Alan said. “They've made a 'hoss' of a machine that's capable of being moved on one trailer. Other machines look prehistoric compared to the Kleemann products. People say I'm making that up, but I urge them to walk through the competitors, then walk back through the Kleemanns, and if you don't notice the difference, you are in the wrong business.”