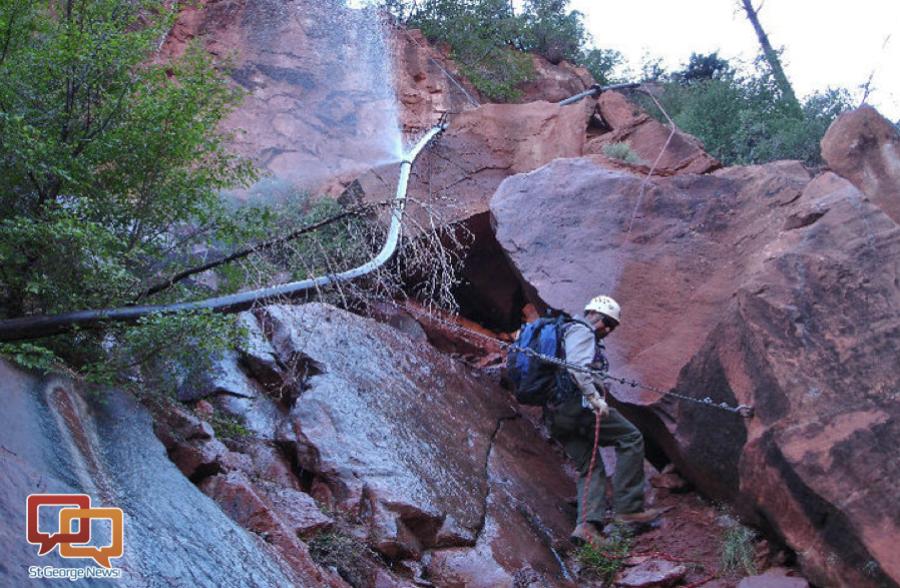 Park personnel assesses damage from a split in a section of the Trans-Canyon Waterline in 2014. The pipeline, installed in the mid-1960s, feeds water from Roaring Springs, located approximately 3,500 feet below the North Rim. National Park Service , St. George News photo

Repairs to the damaged water pipeline serving Grand Canyon National Park's North Rim were completed ahead of schedule, allowing lodging for those with prior reservations, campgrounds and other services to open May 15 as normally scheduled.

Park maintenance crews worked diligently to replace more than 387 ft. of pipeline that was found damaged or missing in March and April. Heavy winter storms caused rockslides that took out segments of the pipeline, which is partially exposed as it traverses rough canyon terrain. It was the worst damage to the pipeline in more than 20 years.

The park also hired a private contractor to haul at least 30,000-40,000 gal. of water a day to North Rim storage tanks as part of its effort to minimize the effects of the pipeline damage on visitors and concessionaires. Hauling began April 28 and continued until the pipeline was repaired.

Forever Resorts, operator of the historic Grand Canyon Lodge — North Rim, announced May 11 it would allow visitors who'd booked stays at the lodge between May 15 and May 25 to restore their reservations. Reservations were cancelled during that time until pipeline repairs were done, the water system was tested, and the park was sure it had enough drinking water for visitors and fire suppression.

The lodge restaurant is open for all meals with a full menu and a breakfast buffet.

Other North Rim services also were opened on time when the gates to the North Rim opened at 7:30 a.m. May 15.

Campsites opened with potable water, laundry and showers. The North Rim grocery store, gas station and post office will be open. Grand Canyon Trail Rides offered at the North Rim began operations on May 15. The North Rim Visitor Center and Grand Canyon Association bookstore opened as scheduled from 8 a.m. to 6 p.m. daily, with a variety of ranger programs offered. The backcountry information center is open 8 a.m. to noon and 1-5 p.m. daily.

South Rim and Phantom Ranch operations were not affected by the pipeline damage.

The North Rim pipeline transports water from within the canyon at Roaring Springs to the North Rim and is operated from approximately May to November. The only public potable water available on the North Rim is stored in its 4-million gal. water-holding tanks.

Pipeline repairs were finished a week or two ahead of the original 45-day anticipated schedule despite challenging conditions. Equipment and replacement sections of pipeline were helicoptered in. The pipeline was positioned, welded and assembled on the sides of dangerous and steep cliffs. Fall-protection equipment and other required safety materials were used to keep the crew safe.

“Our maintenance crews worked extremely hard to mitigate the pipeline damage and protect the well-being of employees, and to ensure the operations of its concessionaires and partners, and the legendary Grand Canyon experience for visitors. Given the extent of the damage to the pipeline, the worst in more than two decades, I'm proud of what was accomplished,” park Superintendent Chris Lehnertz said.

The North Kaibab Trail has been repaired and is open, although hikers may experience brief delays as trail crews continue working. The National Park Service emphasizes the importance of staying on designated trails at all times and hikers should not attempt to go over or around a closure. Trail users should pay attention to directions from park rangers, volunteers and signs placed along the trail.

For more information, visit nps.gov/grca or call the Backcountry Information Center at 928/638-7875.