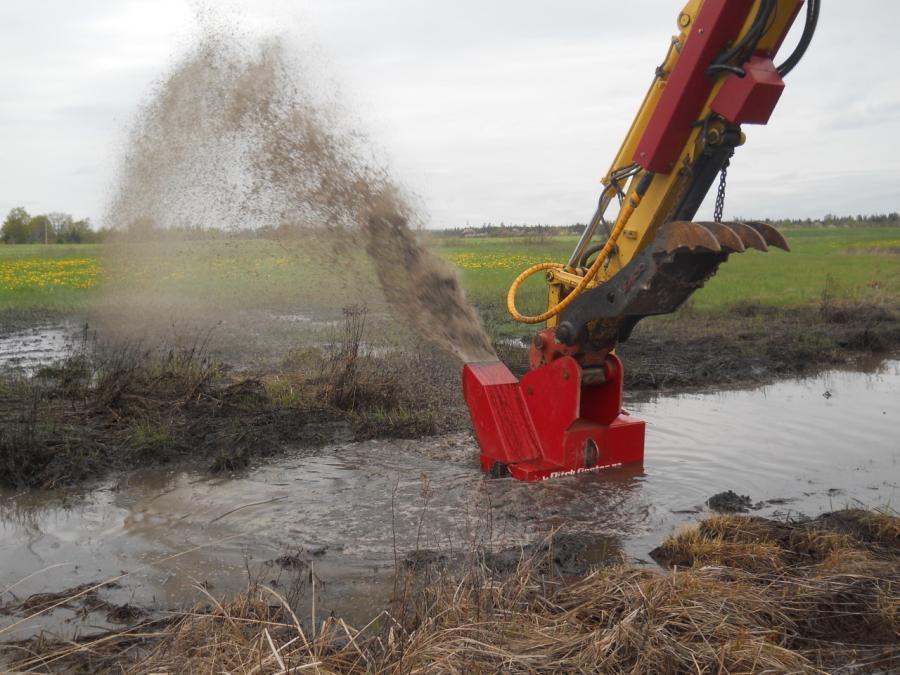 Great Lakes Dredge & Dock Company's Rivers and Lakes Division was faced with sediment-filled ditches and pockets of connecting standing water on a large dredging project in Argenta, Ill. The contractor wanted to consider a new and more efficient approach than the traditional bucket. A unique attachment called the Ditch Doctor turned out the be the right fit.

Great Lakes was contracted by the city of Decatur in April of 2020 to dredge sediment from the 3,093-acre Lake Decatur. The objective was to increase the storage capacity for the local drinking water supply.

The contractor completed that work in November of 2019 and returned to the Oakley Settling Basin (OSB) in April to finish up the dewatering ditches and the landscaping. Great Lakes had cut out the ditches in mid-2019, but they had since refilled due to the viscosity of the material.

"The job here was to put in drain tiles and ditch it so that there's no standing water and that over the years it will dry and return to farmland," said Project Superintendent Tim Cantwell. "We had about 6,000 feet of ditches that were cut all the way around the perimeter, in addition to cutting some new ditches going to the standing pockets of water."

Great Lakes had seen an attachment similar to the Ditch Doctor in Louisiana prior to April, but it was too large and required a hydraulic drive unit to be mounted on the back of the excavator. Its site manager conducted an internet search and came across video footage of the Ditch Doctor and contacted New Jersey-based Ransome Attachments. The Ditch Doctor was smaller, lighter and able to mount directly onto an excavator.

Ransome supplied a 22-in. Ditch Doctor with wet scroll case in May of 2020. Great Lakes mounted it on a Cat 324DL long reach excavator and proceeded to complete more than 2,500 linear ft. of ditch maintenance. The ditches were an average of 4-ft.-deep and 10-ft.-wide with varying sediment depths.

The detachable wet scroll case was chosen because it would allow Great Lakes to ditch in up to 3 ft. of water.

Most of the ditches contained a mucky combination of clays and organic materials and puddled water with minimal vegetation on top and rocks that had settled on the bottom. The alternative, a dry scroll case, is best suited for ditches with 1 ft. or less of water.

Great Lakes also used the traditional method, a ditching bucket, which allowed for a side-by-side comparison.

The contractor has traditionally used a pump to dewater the trench to the greatest extent possible before excavating. Great Lakes had a custom adapter plate made for the quick coupler so changing attachments was a matter of switching out a 70- and 80-millimeter pin.

At its core, the Ditch Doctor is a ditch maintenance attachment. The bucket work was required when Great Lakes encountered virgin clay while digging new ditches.

"The bulk of the work – roughly 80 percent of it – was in previously dug ditches that had filled in," said Cantwell. "The Ditch Doctor worked really well because it just took the sediment that filled those ditches in and blew it right back out."

"If you have the proper conditions, [Ditch Doctor] is at least twice as fast as excavating with a bucket," said Cantwell, noting that having enough water to slurry the material is key. "It did a really good job of cleaning out ditches that had just filled in with the sediment and blew it out of there, kind of like a snowblower."

One of the Ditch Doctor's benefits compared to conventional methods is that no hauling off site is required. Great Lakes used the Ditch Doctor to project material as far away from the ditch and into the impoundment basin as possible. It was able to adjust the RPM output on the Ditch Doctor to help determine the projection distance.

The projection distance was mainly controlled by the thickness of the sediment and water content, according to Cantwell.

"If there was a lot of water, you could throw it 25 to 30 feet," he said, adding that most of the material is in such a wet form that it self-levels within 24 hours. "And other times, you were into thicker, heavier material with more clay, and it would project 10 to 15 feet."

Although Great Lakes had entered into a rental purchase agreement, it ultimately decided not to buy the Ditch Doctor because no fiscally responsible contractor wants a piece of equipment sitting idle.

"We've never used anything like this before," said Cantwell. "It's a unique piece of equipment, so if you have steady work for it, it's fine. If we get a future project that's the right fit, we know it will be available from Ransome."