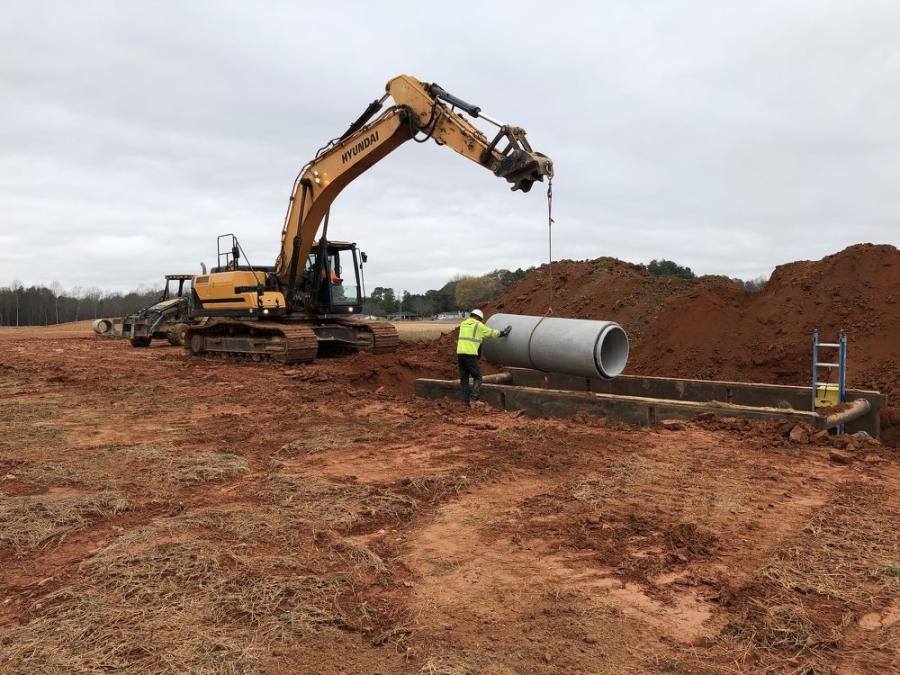 Piedmont Pipe Construction is a leading provider of underground water, sewage and storm drain utilities at sites throughout the Charlotte and upstate South Carolina region.

Lewis Barton puts a great deal of faith in the people that help make his utility construction company successful. In turn, his crews respect him and admire the way he and his management operate the firm.

Barton learned how to run a company properly and treat its employees justly while growing up in New Hampshire, where he watched his parents operate a prosperous building firm.

After moving to North Carolina as a young man, he took those observations and formed Piedmont Pipe Construction in Denver, a Lincoln County town northwest of Charlotte, in 1999. 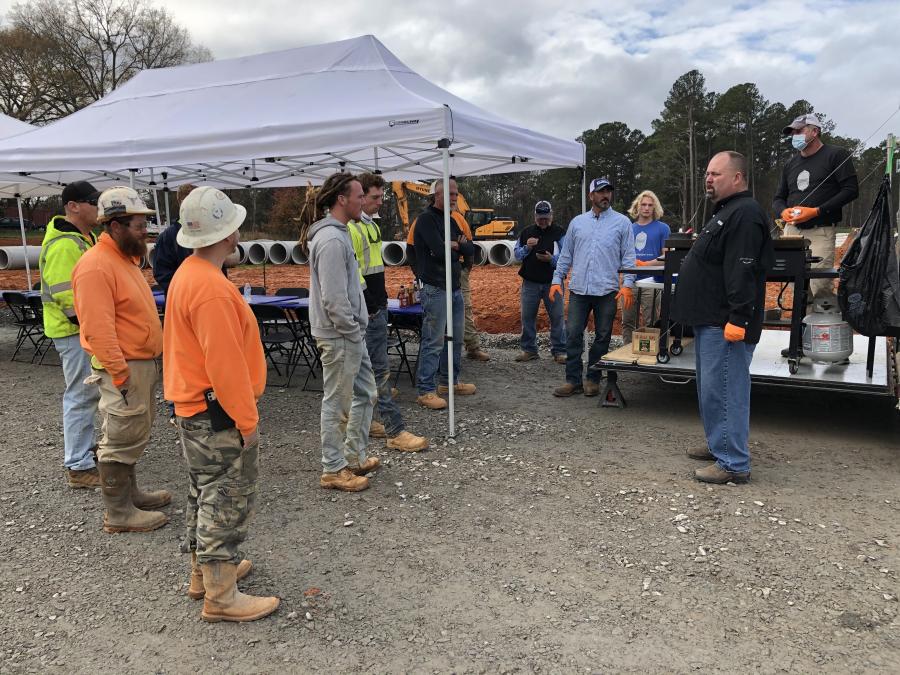 Today, the company is a leading provider of underground water, sewage and storm drain utilities at sites throughout the Charlotte and upstate South Carolina region. In the process, it has also built a reputation for executing its projects on time and on budget.

More than 500 projects have been performed during Piedmont Pipe's 22 years in business, with 100,000 mi. of pipe installed. It is a recognized leader in providing top shelf residential, industrial and commercial underground utility projects.

But, Barton said, the company's prominence in the market is due to the people that make up Piedmont Pipe.

"We really value our people and realize we could not be successful without them," he said. "We are the sum of our employees. As a result, we try to promote from within the company. A lot of our foremen began at Piedmont Pipe as laborers, pipelayers or equipment operators before working their way up."

To show his appreciation, prior to Christmas each year Barton rewards his crews with luncheons on site featuring juicy, thick New York-strip steaks and all the fixings they can eat.

Barton, his son, Luke and stepson, Preston Cox, lent a hand this past December to cook and serve meals for all the operators, pipelayers and laborers in the field. In addition, each crew member was presented with a new work jacket, along with gloves and safety items.

"It's a chance for us to get some face time with the people in the field and let them know how much they mean to us," he said. "This past holiday season, we did it in the three weeks leading up to Christmas, three days a week at our different work sites. I had always wanted to do it and one year I just pulled the trigger to get it started. It was awesome that first time, so we never stopped doing it."

Besides recognizing the importance of his employees, Barton also understands the invaluable contributions of the folks who make the construction equipment he uses and the dealers that bring those machines to his firm.

Although there are several pieces of equipment at Piedmont Pipe's disposal, Barton and his company vice presidents, Jason Lewis and Paul Turcotte, have come to value one manufacturer and one dealership above the others.

Back in 2006, they were in the market for an articulated loader that would work with Piedmont Pipe's fork attachments for its pipe crews. Fortunately for the company, they turned to MAY-RHI, which has 17 locations across the two Carolinas, including a nearby store in Charlotte.

Notably, MAY-RHI also is an authorized dealer of Hyundai heavy equipment, which manufactures precisely what Piedmont Pipe was on the lookout for. 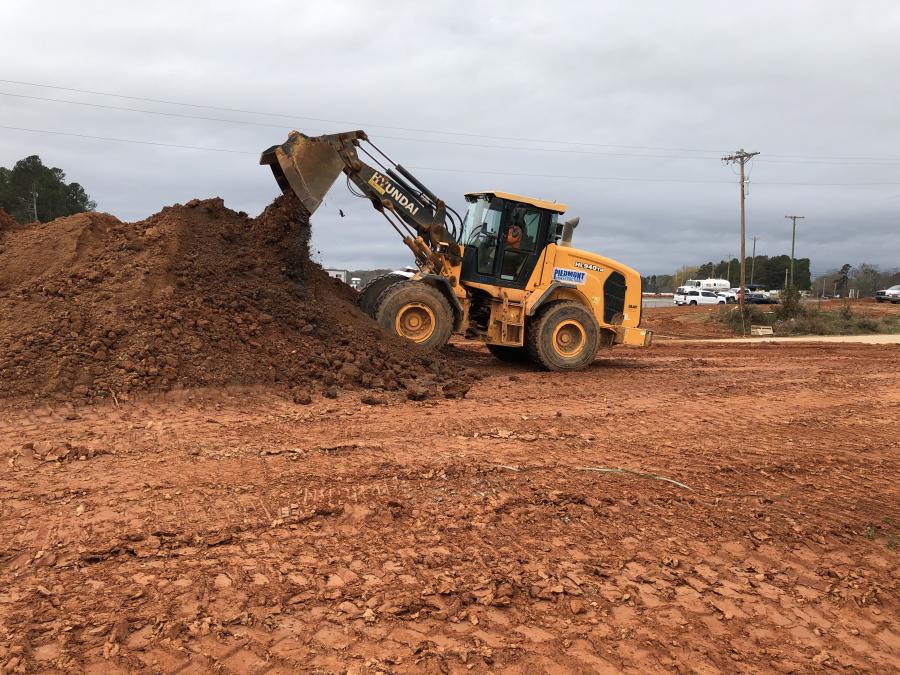 "To demo, we brought four different brands, including a Hyundai, onto the job site," Barton said. "Honestly, I didn't think the Hyundai was going to cut it, but I added it into the mix because the salesman was very persistent. I finally said OK, bring me the machine and I'll try it,' so we did, and three days later the operators' consensus was that they preferred the Hyundai. We still have that wheel loader in use, a model HL740 Tool Master.

"We did the same thing two or three years ago," he added. "We tried a Hyundai HL 940. Once more, everybody liked the Hyundai best, plus it could lift more and do more."

"We haven't yet sent back the first one we got," he said. "Rather than end the lease, we keep extending it and are now trying to decide whether to purchase. We have also added three more excavators since then."

Barton has structured his company so that, on a day-to-day basis, Lewis and Turcotte handle most everything about Piedmont Pipe, he said.

They, in turn, rely heavily on the opinion of the project managers and operators on site to tell them how well the equipment is running.

"From what we hear in the field, the Hyundai equipment is top notch," said Turcotte, Piedmont Pipe's vice president in charge of project management and estimating. "We can handle normal wear and tear but having to shut down due to machines breaking down is something we cannot afford to happen. Having Hyundai on our side has prevented that."

MAY-RHI's Jeff Whitmoyer is the salesman that has worked with Piedmont Pipe for the past six years. According to Turcotte, he has been "quick to get us parts as well as service parts. Just knowing he is part of our team has been great."

Echoing his colleague, Lewis, Piedmont Pipe's vice president of field operations, said that "the biggest two factors for us in choosing Hyundai was our relationship with MAY-RHI and, in addition to that, the pricing of the equipment. Hyundai is a good choice economically; it helps us save more money."

Barton came to North Carolina when his fiancé at the time had an opportunity to move into sales for a company that had an opening in Charlotte. After liking what they saw of the South, they made the move, one that he said he has never regretted.

When he arrived, he came equipped with an old Gradall, a rubber-tired cleanup machine for fine grading and sloping. After using it to do some subcontracting work for a few months, Barton decided to make the leap and start his own utilities construction company. 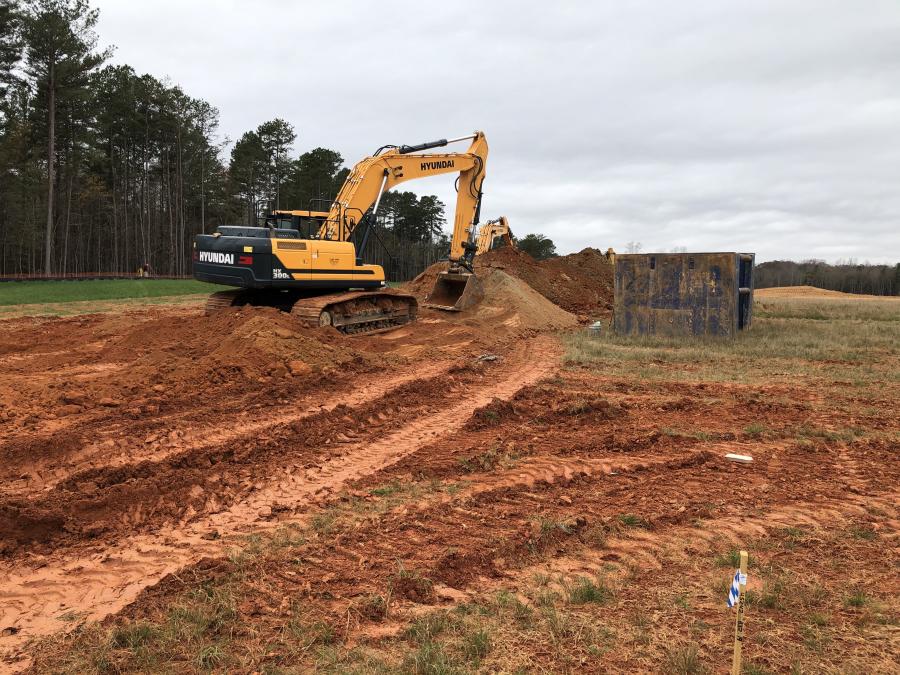 The first project that Piedmont Pipe completed was a large student housing apartment complex for UNC-Charlotte, followed by a second contract to install underground utilities at a large public high school for the Charlotte-Mecklenburg School system.

Decades later and after racking up hundreds of infrastructure projects, Piedmont Pipe has vaulted to new heights within the Carolinas' construction sector.

It began its latest project in the middle of last year at a Gaston County, N.C., site to build the infrastructure for the new Apple Creek Corporate Park, north of Gastonia off Dallas-Cherryville Road. The new industrial park, owned by the county's economic development commission, totals 330 acres in size.

"We are doing all the underground utilities — water sewer, storm drainage and infrastructure," Barton said. "Our crews are only working on the pipes — we don't do any earthmoving — only trenching and backfilling."

Piedmont Pipe is working on the infrastructure for the development's road but has also been picking up new sites to work as the project moves along. Whenever the developer comes out with new building packages, Barton said that his firm has been allowed to submit a bid.

"There are seven or eight different pads currently planned and as the whole project progresses, and new buildings get going, we keep getting new work added to our package," he said. "So, it's an open-ended job for us. We could potentially be in Apple Creek for another two or three years."

For more information on Piedmont Pipe, call 704/489-0911, or visit www.piedmontpipeconstruction.com.