Five years ago, Kevin Baker drove his SUV across the rough 1,000 acres of land bordering a new interstate that was, in 2017, nothing but a trench with dirt lanes.

As he reached a knoll, he could see Greensboro's Piedmont Triad International (PTI) Airport terminal in the distance, its long western runway and, in the foreground, a structure that would unlock a new future of possibilities for development there.

To Baker, the North Carolina Department of Transportation (NCDOT) was building a special bridge for what he, the airport's executive director, believed was a special future. The bridge would link that runway to a 1,000-acre aviation "mega-site" on the western side of Interstate 73.

And when finished, it would carry not cars but airplanes from a manufacturing plant to the underused runway.

The rugged land, assembled from private properties and a golf course, hardly looked like a place where a marquee manufacturer would plant its operations at a lesser-known airport.

But on Jan. 27, that future came into focus when Boom Supersonic, a Colorado startup founded in 2014, announced that it would build a $500 million factory on some of that land for a plane that promises to upend international travel as we know it.

Factory One of Two Blockbuster Projects in Triad

North Carolina Gov. Roy Cooper was in the Triad for the second time in less than two months for the Boom Supersonic announcement, the second blockbuster economic-development success for the region.

"We're back, again, to talk about good-paying advanced manufacturing jobs," he told 300 invited guests at PTI on Jan. 27. "Last month, it was by land. Today, it's by air."

In December, after years of preparation and near misses, Toyota announced it would build a $1.3 billion factory in nearby Randolph County to make batteries for powering electric cars.

Boom Supersonics' plans to build its yet-unproven Overture airliner would return supersonic trans-oceanic travel to commercial passengers that have been relegated to slower aircraft since the demise of the Concorde in 2003.

It also would, along with Toyota's new battery plant, reinvigorate a region reeling from years of blue-collar losses.

The News & Observer reported that the state General Assembly approved more than $106 million for PTI in December to prepare up to 1,000 acres if a then-unnamed company could meet certain thresholds. The news source also noted that Boom also will receive up to $12 million in tax incentives from Guilford County if the company follows through on its investment promise and employs 1,700 workers at the site.

PTI a Catalyst for a Return to Business

Putting Greensboro and the Triad, which include Winston-Salem and High Point, back on the international map for manufacturing has been a dream of business leaders for more than 25 years after the textile, tobacco, and furniture industries — once the bedrock of the region's employment — cut tens of thousands of jobs, moving some overseas while other companies shrank due to dropping sales.

At the same time, the eastern side of PTI began to grow as a home for aviation-related businesses, the Greensboro news source chronicled.

Next to the airport, Honda Aircraft brought its international marquee name to the HondaJet, one of the world's most popular light private jets, almost three decades ago. The company recently celebrated delivering its 200th jet.

Adding to the mix is Cessna Citation's East Coast service operations and the FedEx Express Mid-Atlantic Hub. In 2021, the cargo operation added 350 new employees to support an expanded schedule of daytime flights, bringing total employment to more than 1,000 workers.

Through businesses large and small, the airport employs approximately 8,000 people.

If Boom Supersonic reaches the heights company leaders predict, that number could grow by at least 1,700, with another workforce expansion to 2,400 by 2032.

And the western part of the airport, yet undeveloped, could become the catalyst for an entirely new phase of growth for PTI.

Kathy Savitt, president and chief business officer of Boom told those assembled at PTI that North Carolina and the Triad have everything the startup company could want, from a first-class airport and workforce to its proximity to the Atlantic coast, where Boom hopes to test its planes for supersonic flight over open water.

"We're guided by one audacious mission, and that's to make the world dramatically more accessible," she said. "By the end of this decade, millions of travelers will be able to enjoy sustainable supersonic flight aboard Overture, an airliner twice as fast as any commercial aircraft flying today."

By 2027, she said, Boom is planning to see its aircraft flying 500 routes worldwide, cutting airtime from New York to London to below four hours and from Seattle to Tokyo to under five hours.

Boom's reasons for choosing central North Carolina for its new plant were many, but simple, Savitt said.

"We wanted a location with an excellent talent pool, good schools and a strong infrastructure," she explained. "A location where our future employees would enjoy a very high quality of life. Lastly, but certainly not least, we needed to be close to the coast for our eventual supersonic testing, which happens over water."

While no Overture plane has even flown yet, Savitt noted that United Airlines pledged last June to buy 15 of the jets with an option for 35 more. Japan Airlines also has signed an option to purchase 20 of the aircraft.

Cooper spoke to whether it is a sure bet that Boom will put planes in the air.

"We feel good about the fact that this company has a lot of orders already," the governor said. "And [we feel secure in] the companies across the globe who have invested [in Boom]. Also, it's being built right here at PTI. We feel very confident about this company and believe that it will be a success." 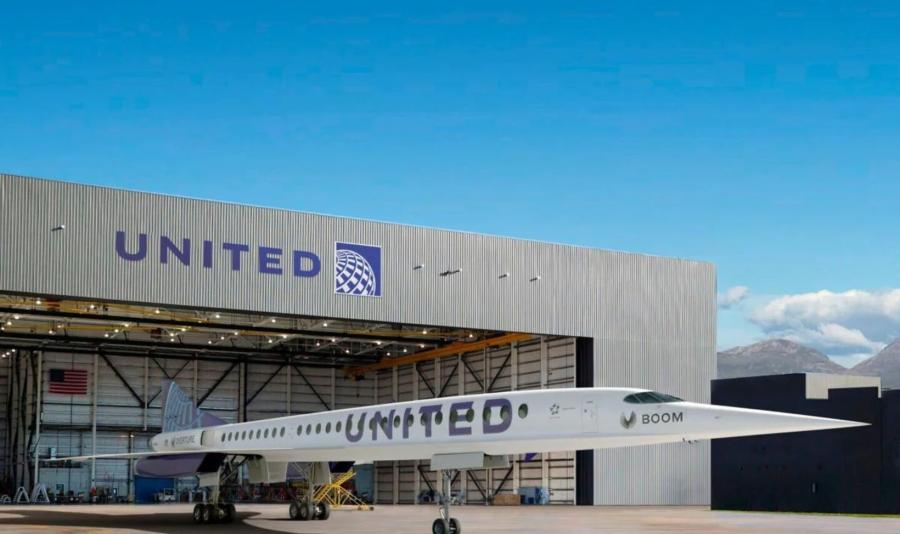