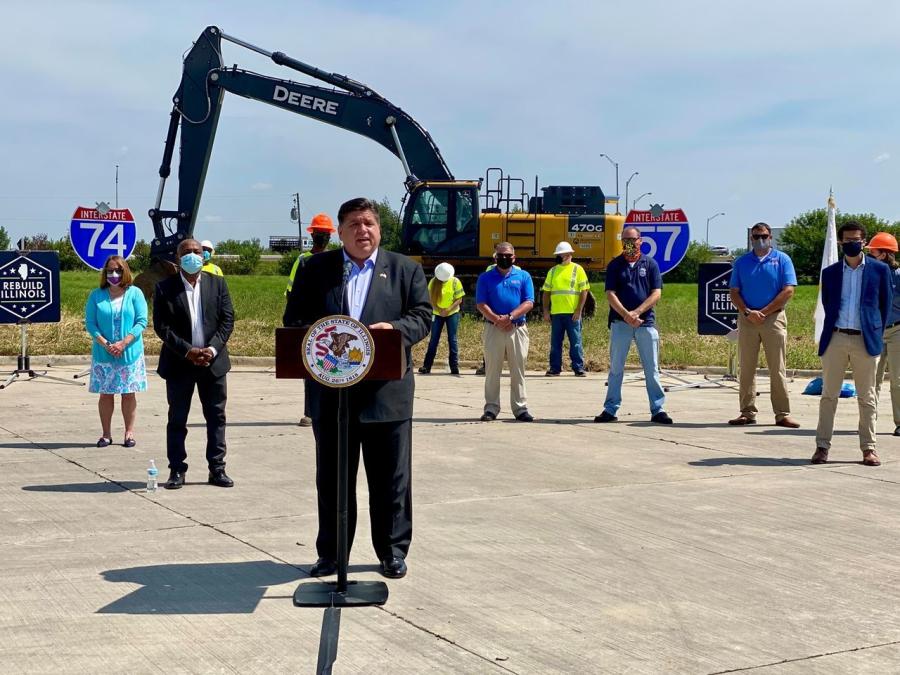 Gov. JB Pritzker and IDOT on Aug. 23 announced the start of construction on a new Interstate 57/74 interchange. The $216.8 million project will rebuild the original interchange built more than 50 years ago.

Gov. JB Pritzker and the Illinois Department of Transportation were joined Aug. 23 by local officials and community leaders to announce the start of construction on a new Interstate 57/74 interchange, one of the cornerstone projects of the governor's historic, bipartisan Rebuild Illinois capital program. The $216.8 million project will rebuild the original interchange built more than 50 years ago, improve safety and mobility, and create thousands of construction and permanent jobs while positioning the region for long-term economic opportunity.

"Today we're breaking ground on the next stage of this $216 million multi-year project to completely reconfigure the interchange: constructing 11 new bridge structures and new ramp pavements, improving traffic flow and safety, and setting the stage for future economic growth in central Illinois," said Pritzker. "And this isn't just an infrastructure plan. It's a jobs plan. Taken as a whole, Rebuild Illinois is creating and supporting hundreds of thousands of new jobs in our state with good wages and benefits."

The I-57/74 rebuild will replace a traditional cloverleaf interchange built in 1965 that no longer meets current traffic volumes and demands with a new design that includes two flyover ramps to improve traffic flow and efficiency for traveling in the region: eastbound I-74 to northbound I-57 and westbound I-74 to southbound I-57. A third, auxiliary lane also will be added to both directions of I-74 between Prospect and Duncan Road.

Upon completion in 2025, the new interchange will eliminate the merging, weaving and slow speeds of the existing structure, resulting in better travel times and much fewer conflicts between vehicles, according to the DOT.

The start of construction initially will require some overnight lane closures while temporary pavement is built to accommodate traffic during construction. Most of the activity during the day will consist of excavation work to build the footprint of the new interchange and have little impact on traffic.

In addition to acting as gateways to the University of Illinois and manufacturing, logistics, healthcare and agricultural industries, I-57 and I-74 each serve almost 35,000 vehicles a day in Champaign-Urbana, nearly 25 percent of which are trucks.

"The I-57/74 interchange is one of the most significant freight and travel hubs in the entire country, but long overdue for replacement," said Illinois Transportation Secretary Omer Osman. "As always, when driving through or approaching any work zone, please be patient, slow down, put down the devices to give the road your undivided attention and pardon our dust while we rebuild Illinois."

Workers on the project include graduates of the Highway Construction Careers Training Program, an IDOT initiative in partnership with Parkland Community College in Champaign to provide minority and female students the opportunity to get on-the-job experience toward full-time work and a career in the construction trades.

Since last year, IDOT has been rebuilding the Mattis Avenue bridges over I-57/74 and the U.S. 150 bridge over I-57 to facilitate the rebuilt, larger interchange, a combined investment of $29.5 million.

The I-57/74 project is just one of many road and bridge improvements in Champaign-Urbana made possible by Rebuild Illinois, representing an additional $83 million investment in the region. Completed projects include I-74 bridge deck overlays and repairs from High Cross Road to the Union Pacific Railroad tracks at $2.4 million, I-72 resurfacing from White Heath Road to I-57 at $8.4 million, and an Illinois 10 bridge replacement over Copper Slough at $900,000. Ongoing work includes I-74 bridge replacements over the Canadian National Railroad at $32.7 million and a U.S. 45/150 (University Avenue) resurfacing from Wright Street to west of Cunningham Avenue at $10.4 million.

For local governments in Champaign County, Rebuild Illinois has meant an added $10.6 million in motor fuel tax revenues to advance their projects. Also, $14.8 million as part of $1.5 billion earmarked for municipal, township, and county projects statewide in Rebuild Illinois has been awarded in the county for road and bridge improvements, traffic signal upgrades, new storm sewers, sidewalk replacements and other long-term maintenance needs.

"The 1960s cloverleaf design of the interchange along with the tight radiuses continue to be a safety issue. Our community through Champaign County First has long supported this much needed update that will enhance safety and bring construction dollars to our community benefiting our local economy. I am grateful that this project is being funded," said Champaign Mayor Deb Feinen.

Passed in 2019, Rebuild Illinois is investing $33.2 billion into the state's aging transportation system, creating jobs, and promoting economic growth. Rebuild Illinois is not only the largest capital program in state history, but also the first one that touches all modes of Illinois transportation: roads and bridges, transit, waterways, freight and passenger rail, aviation and bicycle and pedestrian accommodations.

Through year two of Rebuild Illinois, IDOT has made approximately $5.2 billion in improvements to more than 3,000 mi. of highway and almost 300 bridges, as well as almost 450 additional safety improvements.