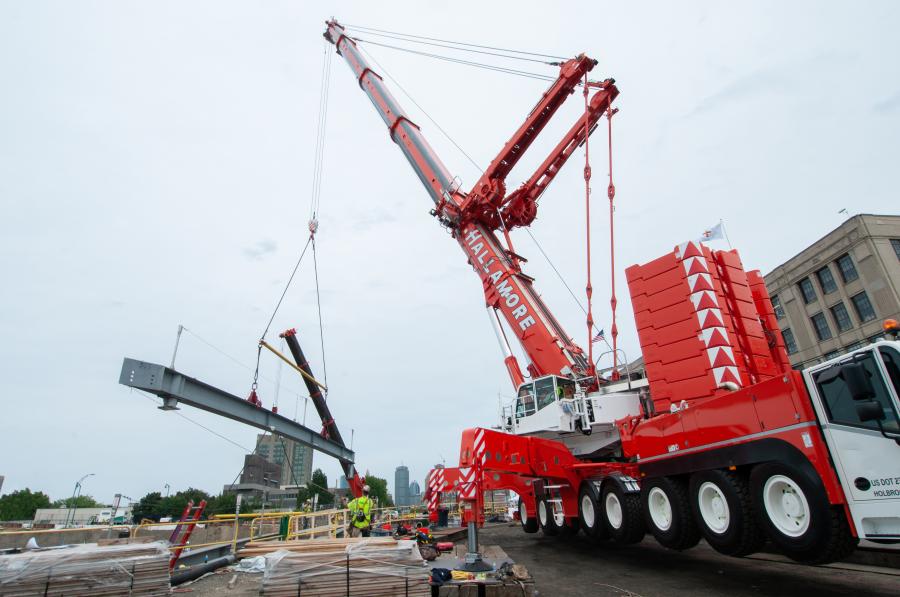 When it came time to work on the westbound bridge, lessons learned from the 2017 process had the prime contractor working with Hallamore to devise a lift plan with a shorter crane set-up time.

Heavily congested construction sites like the Commonwealth Avenue Bridge spanning the Massachusetts Turnpike in Boston pose a problem for planning agencies. Conventional bridge construction projects can take years to complete and impede the traffic patterns throughout construction, which does not appeal to the public. Alternatively, accelerated bridge construction (ABC) impacts traffic more significantly but for a shorter time.

The Commonwealth Avenue Bridge is a major Boston thoroughfare. Roughly 200,000 people each day rely on the Turnpike and bridge to get to their destinations, which includes nearby Boston University, Boston College and Harvard. With so much riding on the project, the Massachusetts Department of Transportation (Mass DOT) decided on ABC to replace the 53-year-old structure.

ABC condensed the estimated 3-year conventional bridge construction project into two intense, meticulously planned short-lived masterpieces. The Mass DOT contract called for the eastbound bridge lanes to be demolished and replaced in 2017 and then the westbound in 2018.

The prime contractor had just 20 days to complete total reconstruction of the eastbound lanes and chose a 1,600-ton (1,450-t) class crawler crane for all the heavy lifting. It was positioned and rigged below the bridge on a portion of the Massachusetts Turnpike. While it had the capacity, "crane assembly time hurt the contractor for such a short-duration project and resulted in extra work and expense during mobilization," said Gary Spencer, general manager of Hallamore Corporation of Holbrook, Mass.

When it came time to repeat the process in just 15 days for the westbound bridge, lessons learned from the 2017 process had the prime contractor working with Hallamore to devise a lift plan with a shorter crane set-up time. Hallamore's strategy included using two 600-ton (500-t) class all terrain cranes — the Demag AC 500-8 and AC 500-1 — one working on Commonwealth Avenue and the other from the Massachusetts Turnpike. 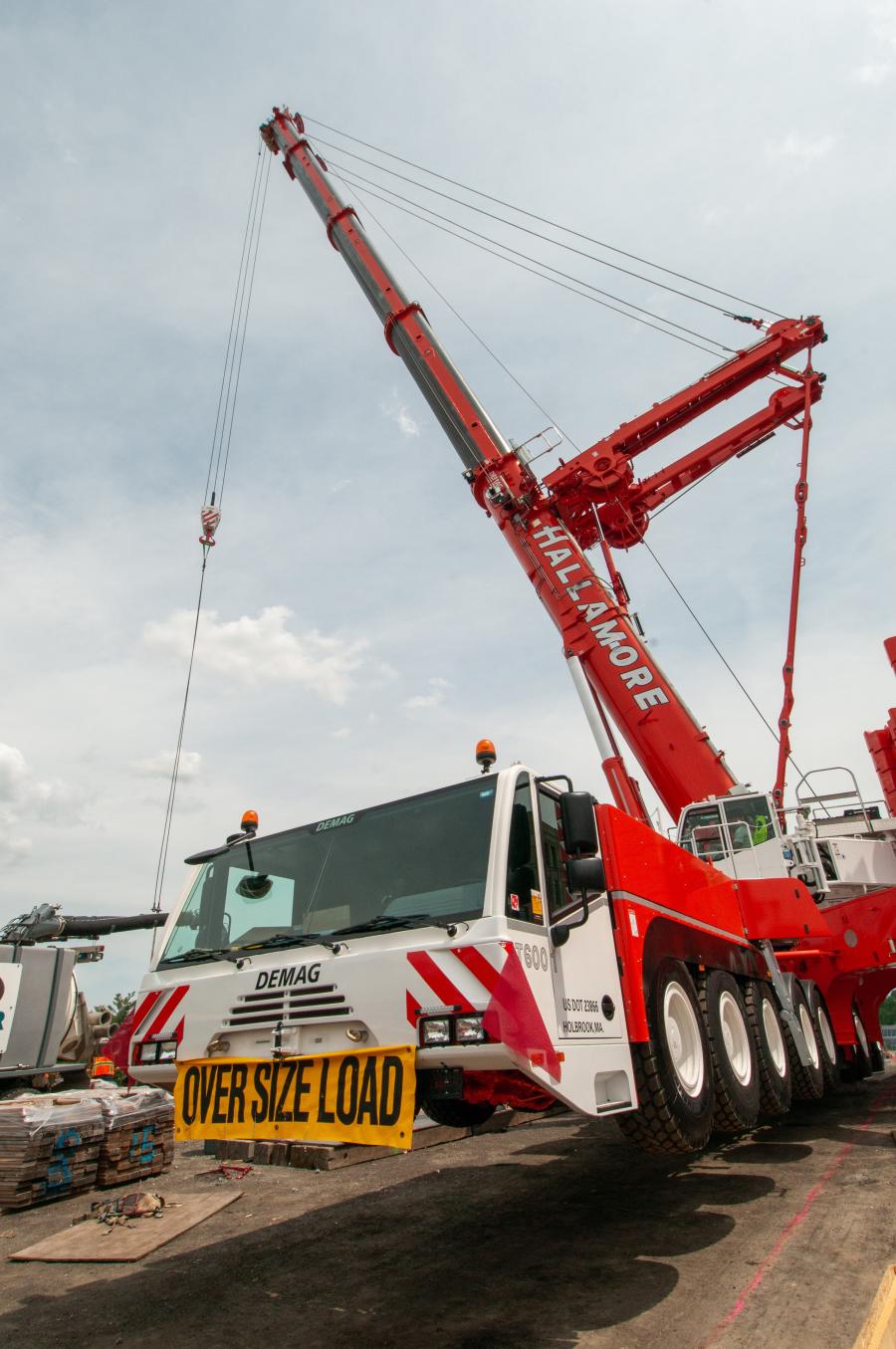 "Using a crawler crane would have been extremely difficult for this phase due to the incline where the crane had to be positioned," said Spencer.

A Need for Speed

While the number of travel lanes was restricted during the planned 15-day construction period, the Mass Turnpike remained opened, which created some congestion for crane positioning.

"We knew it was going to be tight, so our 600-U.S.-ton Demag cranes were the best choice," said Spencer. Andrew Longacre, regional business manager of Terex Cranes, added, "The AC 500-8 has a carrier length of just over 56 ft., making it the most compact eight-axle crane in its class, perfect for accessing congested sites."

Both cranes were quickly mobilized, along with 12 to 13 truckloads of counterweight and rigging materials for each crane, to the Commonwealth Avenue Bridge from Hallamore's Holbrook yard, approximately 25 mi. away. Hallamore has used its AC 500-1 crane for nearly 15 years.

"It has been very dependable for us, and that is why we decided to purchase the AC 500-8 for this project," said Spencer.

Hallamore purchased the Demag AC 500-8 for this project from Empire Crane, which is based in Syracuse, N.Y., and has branches in Bridgewater, N.J., and Boston, Mass. The Hallamore family and the Lonergan brothers, owners of Empire Crane, have done business together for more than 25 years, including multiple crane sales, parts and crane service.

The new crane arrived just weeks before the Commonwealth Avenue Bridge project. Terex Cranes and Empire representatives worked with Hallamore to make sure it was ready for days of intense, round-the-clock lifting. 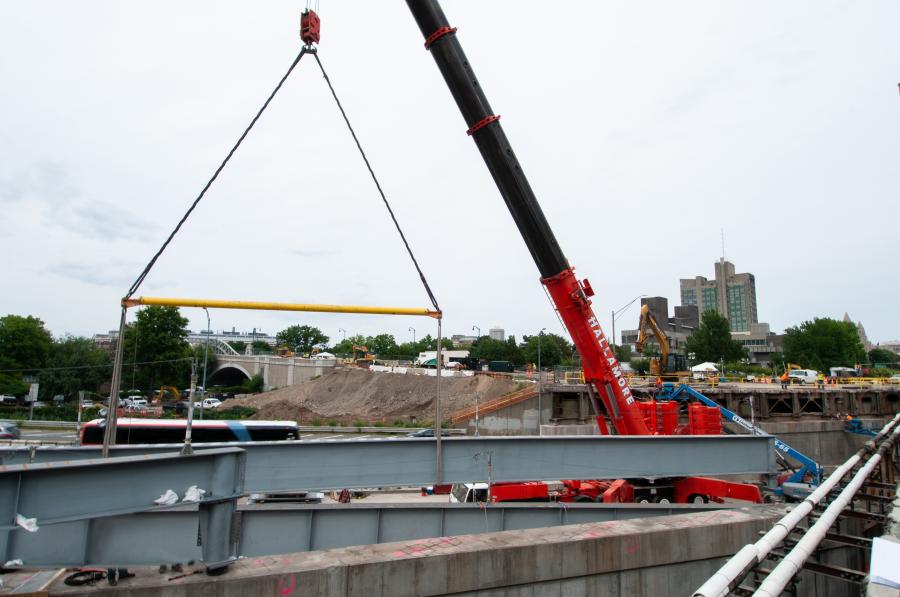 "Crane set-up went flawlessly, so we were confident it was ready for the project," said Spencer.

During initial set-up, Spencer and his crane operator noticed some differences between the new crane and the 2003-vintage model. The additional tie-off points on the new AC 500-8 crane were appreciated, since they enhanced safe rigging of the mobile crane.

"The crane functions are very similar between the two cranes, but the control system on the new crane is touch-screen and a lot easier to operate," he said.

IC-1 Plus is designed to provide the crane's maximum allowable lifting capacity, based on slewing angle, for main boom operation.

"The capacity charts of the AC 500-8 are improved over our older crane," said Spencer. "We have another job upcoming where the older AC 500-1 does not offer the capacity to complete, but the AC 500-8 does."

The AC 500-1 crane drove into its spot on the Massachusetts Turnpike, and Hallamore's crew rigged it in-place with full 352,800 lb. (160 t) of counterweight in about 4 hours, a fraction of the time it would have taken to fully erect a crawler crane. Due to crane positioning for the lifts, Hallamore's crew did not need to rig this crane with the sideways superlift (SSL) structure.

The newer AC 500-8 crane was positioned on Commonwealth Avenue, nearby the bridge. The lift plan called for the use of its full 183.7-ft. (56-m) telescopic boom to pick the concrete panels. Since operating radius reached 168 ft. (51.2 m), crews rigged this crane with its full 396,800-lb. (180-t) counterweight stack and SSL for additional lifting capacity.

"Even with the SSL, we were still hook-ready within 6 hours," said Spencer.

During bridge span demolition, the AC 500-1 removed girders and worked its way toward the abutment span by span. In just 36 hours, spans 1 and 2 were completely removed.

"The heaviest girder lift was positioned with 154.9 ft. of boom at a 120-ft. radius, which gave crews a capacity of 76,500 lb., enough to allow them to complete the lift with safety factor," said Longacre.

From late July through early August, an average of 200 people worked two, 12-hour shifts to complete demolition and reconstruction of the 380-ft. (116-m) long Commonwealth Avenue Bridge. With up to $1 million per-day disincentive for not meeting the project's major milestones of opening light rail, commuter rail and the bridge, the risk was high. For the traveling public, the reward was even higher.

"It was an incredibly tight timeline, but our Demag cranes and all workers performed flawlessly to complete each milestone on time or ahead of schedule," said Spencer.

Hallamore is a multiservice organization that provides transportation, heavy hauling and crane rental services from a network of offices throughout the Northeast. Hallamore operates and maintains one of the region's largest equipment fleets to offer its customers improved scheduling, cost-control and safety. Hallamore has earned a reputation throughout its long history as a responsive company that meets whatever challenges arise in rigging, heavy hauling, crane rental and specialty contracting.