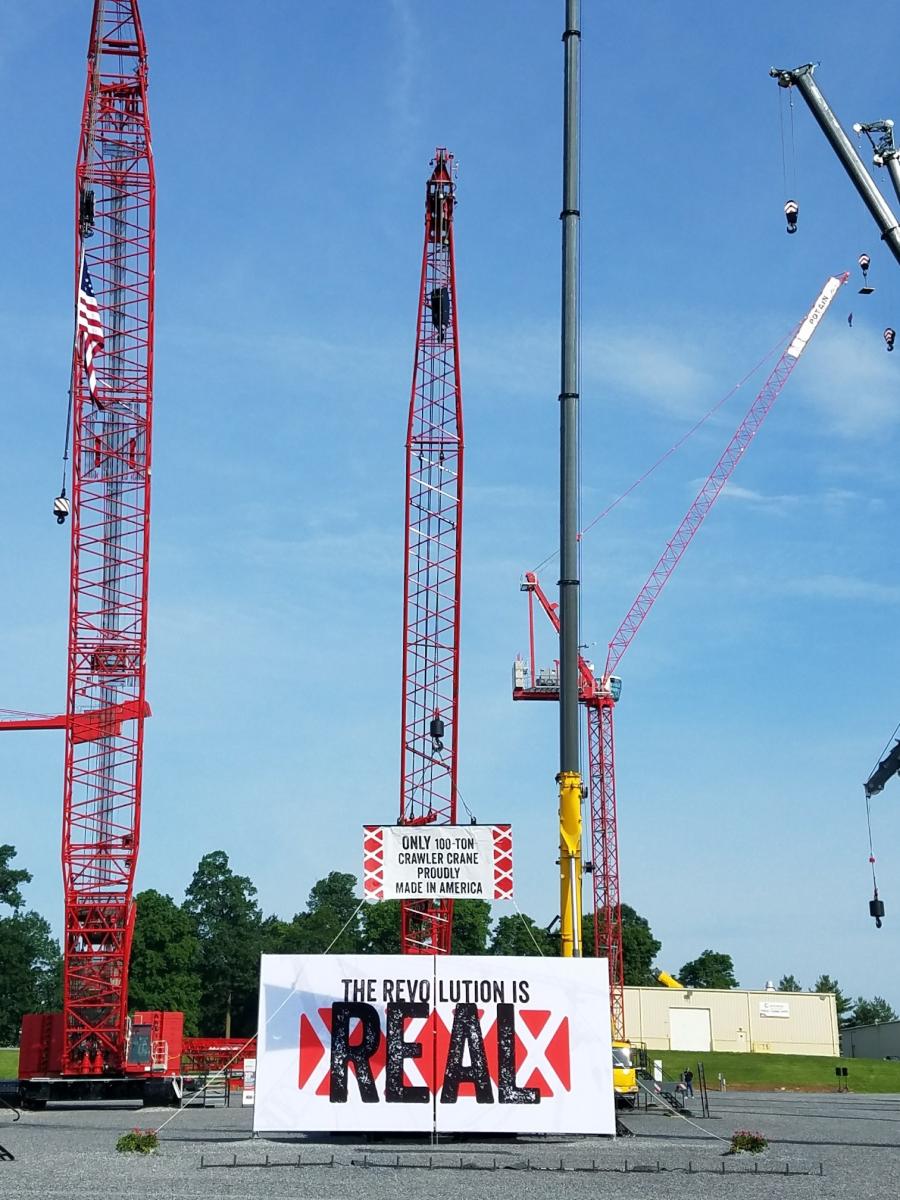 New Jersey's George Harms Construction is a leading contractor in the Garden State.

At the recent Manitowoc Group's Crane Days event in Shady Grove, Pa., the company didn't set out be a leader there, but when Rob Harms, CEO of George Harms Construction, saw a prototype of the new Manitowoc MLC100-1 crawler crane in action, he knew his company needed to purchase one — and as a result, the company became the first in the United States to place an order for the new 110-ton machine.

What impressed Rob Harms about the MLC100-1 right away? “The simplicity in the design,” he said. “I also was impressed with the counterweight system, the power plant, the controls, the cab, the way you can transport it.”

And there was another reason why the Manitowoc MLC100-1 appealed to Harms — it's made in America.

“That's a big deal for us,” he said. “If you look at any of our cranes, we have an American flag flying. I mean big American flags.”

Tim Watters, president of Hoffman Equipment of Piscataway, N.J., the dealer that sold the MLC100-1 to Harms Construction during the Crane Days event, echoed the patriotic sentiment.

“Let's start with that it's manufactured in the United States,” he said. “It is a feature that resonates with the customers and it is the only 100-ton machine in that class that is manufactured here in the U.S. in Shady Grove, Pa.

“Harms Construction was impressed that the manufacturing has been brought back to the United States,” Watters continued. “All manufacturers, including Manitowoc, have until now felt that they could not compete with the foreign manufacturers on the smaller machines. These are clearly more of an assembly line process and conventional wisdom says that we don't do that well anymore. But Manitowoc is stepping up and saying we can take foreign manufacturing on at what they do well and we can beat them at their own game.”

If a crane (or any piece of construction equipment) isn't manufactured to meet the demands of contractors to efficiently and productively do their jobs, however, it doesn't matter where it's made — and the Manitowoc MLC100-1 was designed to meet the unique needs of American contractors.

“It is a very transportable machine,” Watters said. “It is designed to move in an operable configuration, where you can load and move the machine on a trailer. The next big feature is the cab, because it's made in America for Americans. We know what Americans want. They need a wide body cab and that is what the machine has. It self assembles. It is optimized for transportation and after service support.”

Another important feature of the MLC100-1 is the crane control system, or CCS.

“The Manitowoc company utilizes the same operator station — they call it the CCS, crane control system — in every single crane they manufacturer,” Watters said. “Any operator can go from any machine to another machine and they will find the same layout of levers, buttons, screens — every one is the same. This crane also will integrate the CCS into the operating system.”

The crane operates via Manitowoc's CCS, which can be used in conjunction with the company's Diagnostic Code App to quickly analyze diagnostic screens.

When Manitowoc launched its CCS in 2014, the company became the first manufacturer to introduce a common operating platform across multiple product lines. Each CCS unit features the same control layout, including a jog dial and central display with standardized symbols. There are only seven major components that make up CCS, simplifying service and maintenance and delivering better reliability. The seven components are: crane controller, safety controller, small IO (input/output), large IO, joysticks, jog-dial and display. Each can be easily replaced if necessary, or even switched from another machine for the purposes of completing a job.

Other Features of the MLC100-1

The crane features a self-assembly hook, which enables the operator to install the counterweight without any outside assistance. During assembly, the crane uses a single segment of hoist line with a button termination, which is routed through sheaves in the boom butt. This eliminates the need to assemble the boom top and enables operators to get to work faster when compared with competing cranes in the same class.

The MLC100-1 has an improved, wider cab design, with easier access to the cab made possible by additional grab bars and a movable left-hand console. In addition, the cab's high-back seat with head rest and electronic seat controls combine with improved HVAC performance for best-in-class comfort.

End users can customize the MLC100-1 with numerous options to suit their specific job site needs. These include a free-fall option, a third-drum option with 72-ft. wire rope, generator-powered boom lights and a cold weather package for high performance in the toughest climates.

The crane allows for easy service with high-visibility sight glasses and quick drains on every gear box. The main valve also is easily accessible.

Harry Rice, crane specialist of Hoffman Equipment, said all of these features of the MLC100-1 are a direct result of the Manitowoc Group's focus on end users and incorporating what they've requested into its cranes' designs. Simply put, they've been listening to their customers

“Harms Construction has a long-time relationship with both Hoffman Equipment and Manitowoc,” said Rice. “They definitely feel that there is a great line of communication now between Manitowoc and the customer and what they actually want in a crane in today's market.”

And it was this relationship and trust that Harms Construction has both with Manitowoc and Hoffman Equipment that led it to purchasing a prototype — Harms is confident that when the MLC100-1 is delivered to the company in the first quarter of 2019 that it will be a productive and important addition to its sizable crane fleet.

“Harms has always been a great customer of ours,” said Watters. “They own approximately 10 Manitowoc cranes and have been buying Manitowoc cranes since the early 1990s. They attended Crane Days primarily to see the new line that has been set up for Manitowoc crawlers since Manitowoc moved the crawler manufacturer process from Wisconsin to Shady Grove. But they were not planning on buying a crane when they got in the car that morning. After the introduction of the MLC100-1, we walked up and looked at the machine and within about 30 minutes they were pretty impressed with what they saw. They said 'how much is it — we'll take it.'”

Rob Harms is looking forward to delivery of the MLC100-1 in early 2019 and already has big plans for it.

“We plan to use the new MLC100-1 mostly on our highway projects,” he said. “We have a project in Jersey City … the Route 7 Wittpenn Bridge. It's a $197 million New Jersey DOT project that is going on right now. It'll most likely go on that job and hopefully, we have more jobs coming up where we'll put the crane to work. We had a big need for a 110-ton crane and we'll be keeping it busy. It's always nice to be the first one and we are excited to take delivery.”