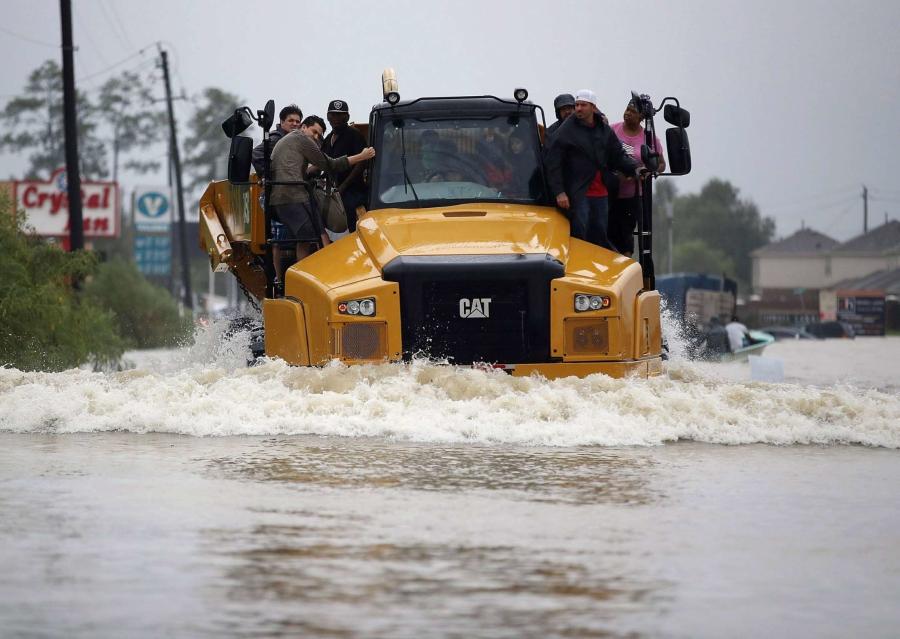 People catch a ride on a Caterpillar 745C articulated truck down a flooded street as they evacuate their homes after the area was inundated with flooding from Hurricane Harvey on Aug. 28 in Houston, Texas. See page 54 for more. (Joe Raedle/Getty Images)

Harvey, which made landfall late Friday, Aug. 25 as a Category 4 hurricane has lingered, dropping heavy rain as a tropical storm, and has sent devastating floods pouring into Houston. The rising water chased thousands of people to rooftops or higher ground and overwhelmed rescuers who could not keep up with the constant calls for help.

Officials released more water from Houston-area reservoirs overwhelmed by Harvey early Monday, Aug. 28, in a move aimed at protecting the city's downtown from devastating floods, but that could still endanger thousands of homes, even as the nation's fourth-largest city anticipated more rain.

Federal Emergency Management Agency Director Brock Long said during a news conference that 50 counties in Texas are affected by the flooding and that a tremendous amount of rainfall is in the cards for southwest Louisiana. As water has risen, the National Weather Service issued another ominous forecast: Before the storm is gone, some parts of Houston and its suburbs could get as much as 50 inches (1.3 meters) of rain. That would be the highest amount ever recorded in Texas. The rain and floods have been blamed in at least 14 deaths as of press time.

Look in upcoming issues of Construction Equipment Guide for continuing coverage of the aftermath of Hurricane Harvey, particularly as the flooding recedes and the long road to cleanup and infrastructure reconstruction becomes clearer.