A San Francisco pitcher lends a hand to help out a good cause. 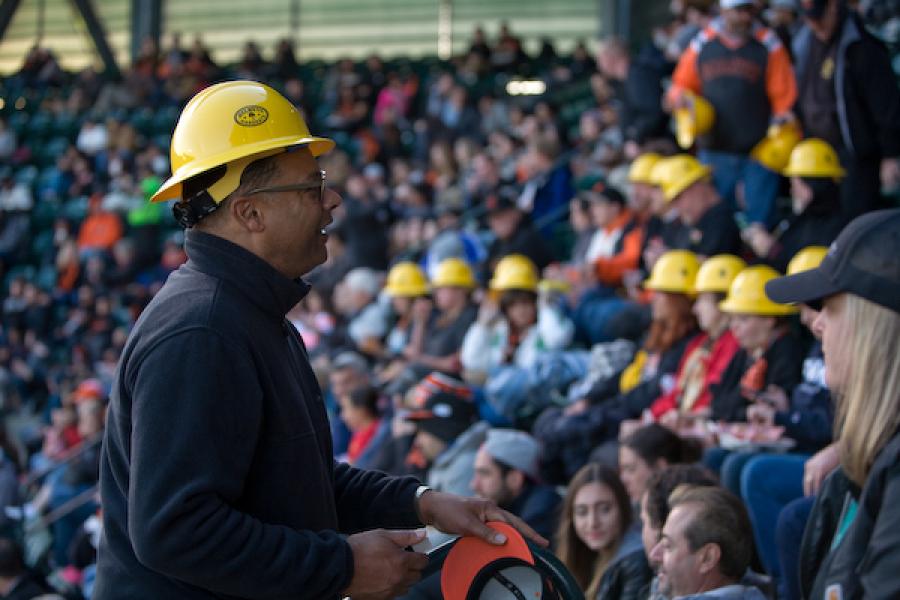 More than 200 veterans (all wearing bright yellow hardhats) took over a section of AT&T Park in San Francisco to cheer on Pitcher Madison Bumgarner in hopes of more strikeouts.

More than 200 veterans (all wearing bright yellow hardhats) took over a section of AT&T Park in San Francisco to cheer on Pitcher Madison Bumgarner in hopes of more strikeouts. This season, Carhartt is donating $500 for every strikeout that Bumgarner records to Helmets to Hardhats, a nonprofit group that connects veterans to careers in the construction industry.

Over his seven-year career, Bumgarner has averaged 212 strikeouts per season. As a company that builds product for hardworking trades and craftspeople, Carhartt says it is proud to support a group that connects military service members and veterans with skilled training in a building trades union apprenticeship and a career in the construction industry.

Carhartt has partnered with pitcher Madison Bumgarner for the 2016 baseball season to help transitioning active-duty military service members find meaningful careers in the trades. Carhartt will donate the $500 for every strikeout that Bumgarner records during the regular season with all proceeds going to Helmets to Hardhats, a national nonprofit program that helps military service members successfully transition back into civilian life by offering them the means to secure a quality career in the building and trade industry.

Bumgarner ranked fourth in his league last season with a career best 234 strikeouts, which would translate to a total of $117,000. Carhartt did not set a cap for this campaign and will donate the full amount earned.

“I have a deep appreciation for all the men and women who serve in the armed forces and sacrifice each day so that we can live in a safe and free country,” said Bumgarner. “I am honored to partner with Carhartt in support of Helmets to Hardhats.”

“As a company that builds durable product for hardworking people, Carhartt is honored to support a group that connects military veterans with skilled training in a building trades union apprenticeship and a career in the construction industry,” said Tony Ambroza, senior vice president of marketing at Carhartt. “As a rancher, Madison knows what it takes to get things done, and is one of the hardest working players in the game today. We hope he sets a new strikeout record and raises a substantial amount of money for military service members.”

“After serving our country, the last thing our brave soldiers should have to worry about is finding a job. Helmets to Hardhats has successfully placed over 20,000 veterans into quality careers in the past 13 years,” said Darrell Roberts, executive director, Helmets to Hardhats. “It takes nearly $1,000 for one veteran to successfully complete the program so we are very thankful to organizations like Carhartt that help us raise funds. We are looking forward to celebrating Madison's strikeouts all season long.”

To learn more about Helmets to Hardhats, please visit www.helmetstohardhats.org.