Help Arrives for Sandy-Wrecked Town as Others Resist Dunes 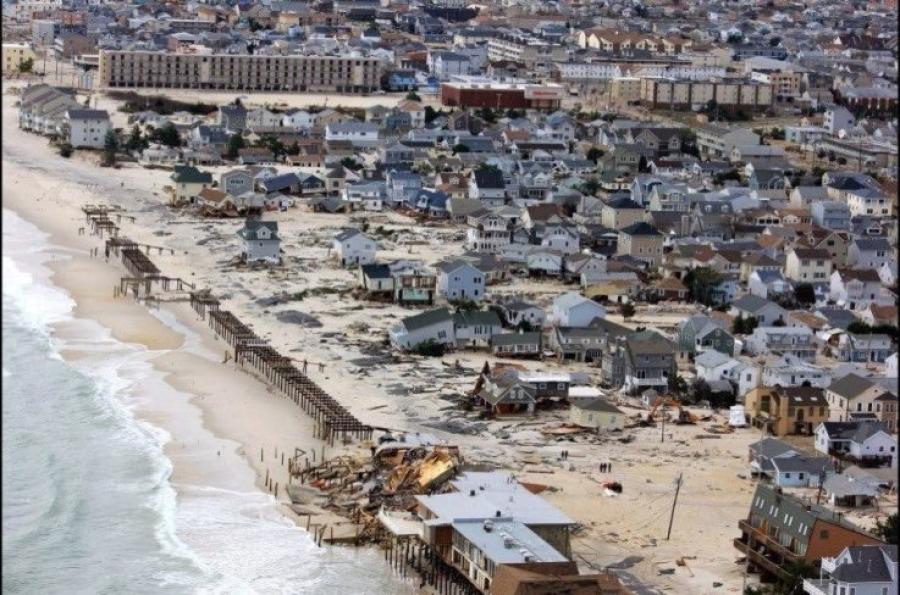 TOMS RIVER, N.J. (AP) In one of the largest beach repair projects in U.S. history, the federal government has begun dumping so much sand on a stretch of the New Jersey shore that it could fill a football stadium more than five times over.

Yet even this $128 million project isn't enough to repair the damage Superstorm Sandy did to the Jersey shore. And not everyone wants the help.

Few places in New Jersey suffered worse in Sandy than the Ortley Beach section of Toms River. A historically vulnerable part of the shore whose beaches are prone to worse-than-normal erosion, the community was devastated by the 2012 storm. And nearly five years later, things remain far from normal.

The neighborhood, a popular mix of year-round and summer vacation homes, remains pockmarked by vacant lots and the wooden frames of half-built houses.

But help is finally here: On the beach where the former police chief watched in awe as walls of water flowed across the barrier island from the ocean to the bay, a long-awaited beach replenishment and dune reconstruction program has finally begun. The U.S. Army Corps of Engineers began pumping sand from an offshore location onto Ortley Beach's painfully narrow beaches.

The work could not come a moment too soon in a community that dubbed itself “ground zero” of the catastrophic storm, where even Britain's Prince Harry visited to eyeball the damage.

“I'm loving it,” said Larry Hometchko, a resident who only moved back into his rebuilt home in late May — more than four years after the storm.

It's still fairly lonely in his neighborhood, though.

“On my street, there's only three of us,” he said.

“That's a little depressing,” his wife, Debbie added. &#8220But everything's going to be new again when it all gets rebuilt, so that's the light at the end of the tunnel.”

The Army Corps said it will eventually pump enough sand ashore to fill MetLife Stadium in East Rutherford, N.J., where the NFL's Giants and Jets play, five and a half times.

The project to widen beaches and build protective sand dunes spans a 14-m. stretch of the Jersey shore that saw Sandy's worst damage. It includes Mantoloking, which was cut in two by the storm that carved a new inlet across the barrier island, and damaged or destroyed virtually every one of the borough's 521 homes.

And it also includes the largest pockets of resistance to the dune project: Bay Head, where residents are suing to block the dunes, claiming the $5 million of their own money they spent on a rock wall offers better protection, and Point Pleasant Beach, where the privately owned Jenkinson's Boardwalk opposes dunes that would reduce its prime beach territory. Both those towns remain mired in litigation, as do some scattered cases on Long Beach Island.

A similar revolt in Margate, just south of Atlantic City, died when two lawsuits challenging the project failed, including one that raised fears that puddles on the sand behind newly built dunes could breed mosquitoes that would spread the Zika virus.

Bob Martin, New Jersey's environmental protection commissioner, said 128 easements remain to be acquired before work can be completed everywhere, 53 of which are in litigation. While praising those who signed voluntarily, Martin singled Bay Head out for special criticism, saying the wealthy enclave really wants to keep outsiders off its sand.

Thacher Brown, one of the homeowners suing to block the project, said they are not against public use of Bay Head's beaches. He and others said the project is duplicative and wasteful, and question the government's willingness and ability to pay for periodic touch-up work for the next 50 years.

But Ortley Beach is happy to have the sand. Toms River Mayor Thomas Kelaher noted at a ceremony heralding the project that “we're standing on a boardwalk that disappeared in Sandy, and our cars are parked on a street that didn't exist after Sandy.”