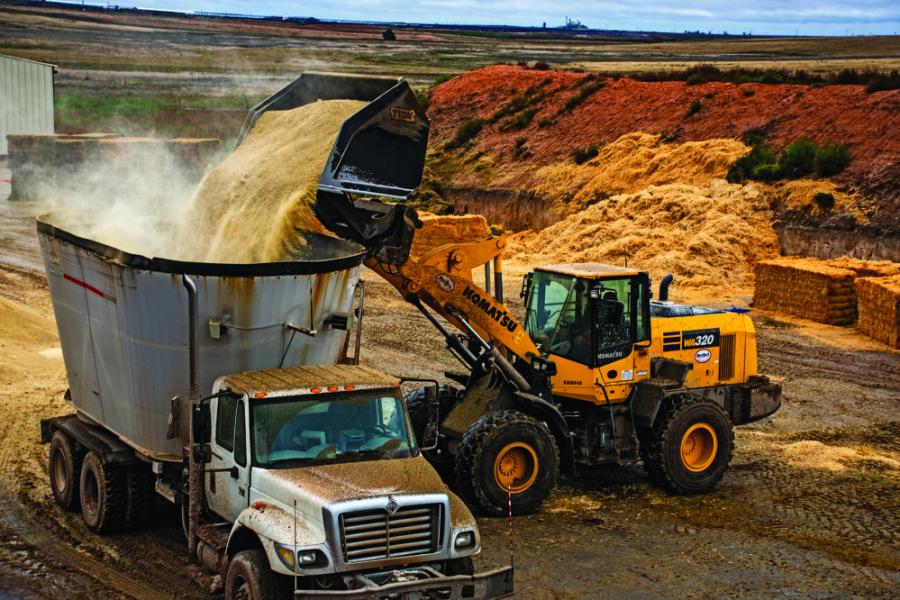 Nearly a year ago, Cnossen Dairy added four 34,000-lb.-plus, 165-hp Komatsu WA320-8 wheel loaders to fill stationary mixers and mixer trucks with feed. “The loaders sped up our operations and increased our efficiency by between 20 and 30 percent,” said Jim Cnossen, owner.

Jim Cnossen can easily pinpoint where the dairy industry bloodlines began on his dad's side of the family. His father started milking cows before Jim was born and eventually established his own operation. On the other hand, it's a little harder to determine how deep his mom, Clara's, roots run.

"We aren't sure how far back dairy farming goes in her family, who moved to the United States from Holland after World War II — definitely multiple generations," said Cnossen, owner of Cnossen Dairy in Hereford, Texas. "I grew up around dairying, and my wife, Ellie, and I both still enjoy it. Our kids do too, and they are active participants in the business." 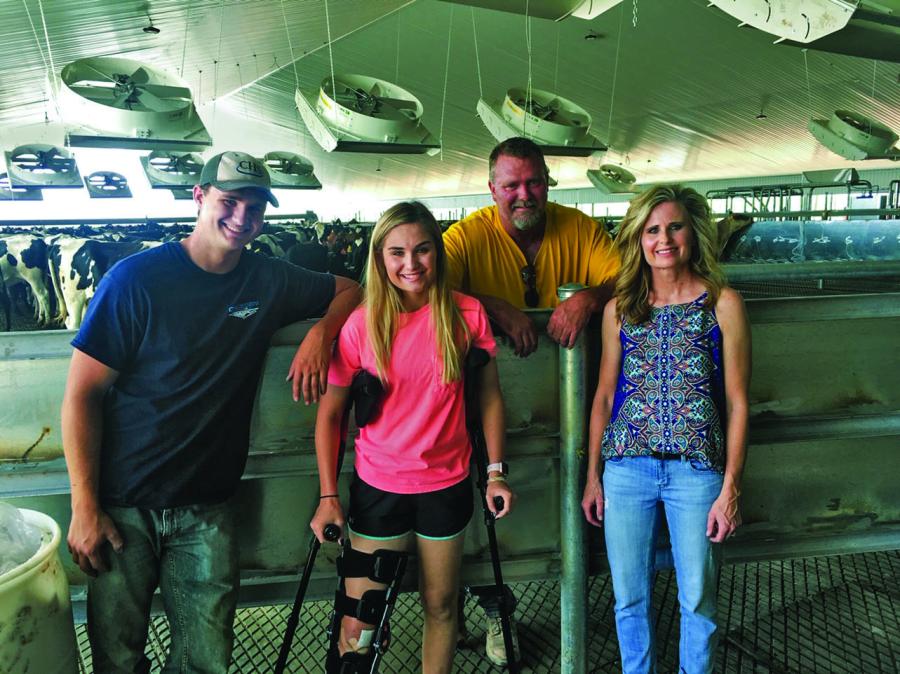 Their son, Cord, recently graduated from college and joined the business full-time. Daughter Evie, who is a sophomore in high school, helps out and has ambitions to work in animal nutrition someday. Ellie looks after the health of the cows and lends a hand with inventorying calves.

Jim Cnossen oversees day-to-day activities of the dairy, which commenced operations in Texas in 2005 after the family moved from Idaho where he, his brothers and their father had previously operated dairy farms. They relocated to Idaho from Southern California where his dad leased a dairy and milked until the early 1970s.

Cnossen Dairy currently milks in the neighborhood of 8,000 head — each twice a day. It recently added a second milking barn that will handle 5,000 cows. An older facility contains two milking parlors, one that accommodates about 1,000 head per day, and the other up to 5,000.

"This is a 24-hour-a-day operation," Cnossen said. "There are two shifts of milkers and feeders; three shifts for personnel looking after pregnant cows in the maternity area; and one each for shop, office and general farm staff. Right now, we have close to 70 employees. That number will rise as we expand, and so will our production, which should reach 100,000 gallons per day in about a year."

Technology plays a prominent role in Cnossen Dairy's operations, especially in its new facility, where cows are put on a revolving "table." Workers clean the udders, then attach the computerized milking machine, which logs how much product the cows produce.

Every cow has an electronic identification tag (EID), and as it takes the short ride around the table, details about the animal, such as whether it's time to trim its hooves, are gathered by scanning the EID. At the older facility, scanning is done during feeding.

"The scans provide critical and immediate information that we can use to take action; for instance, they tell us what stage of gestation a pregnant cow is in and if we need to stop milking her," Cnossen said, noting that cows have a nine-month gestation period. "If that's the case, the cow is pulled out of production, hooves are trimmed and she gets a couple of months off to just eat and relax until she calves. A day after giving birth, we milk her for the colostrum, which is fed to newborns and contains needed antibodies."

Mature cows are fed a daily ration that's carefully balanced for vitamins, minerals, protein, energy and starch. Up to 40 percent of the crops that go into Cnossen Dairy's feed mix are grown in its adjacent fields. The business puts up between 80,000 and 120,000 tons of wheat, corn and sorghum silage annually. 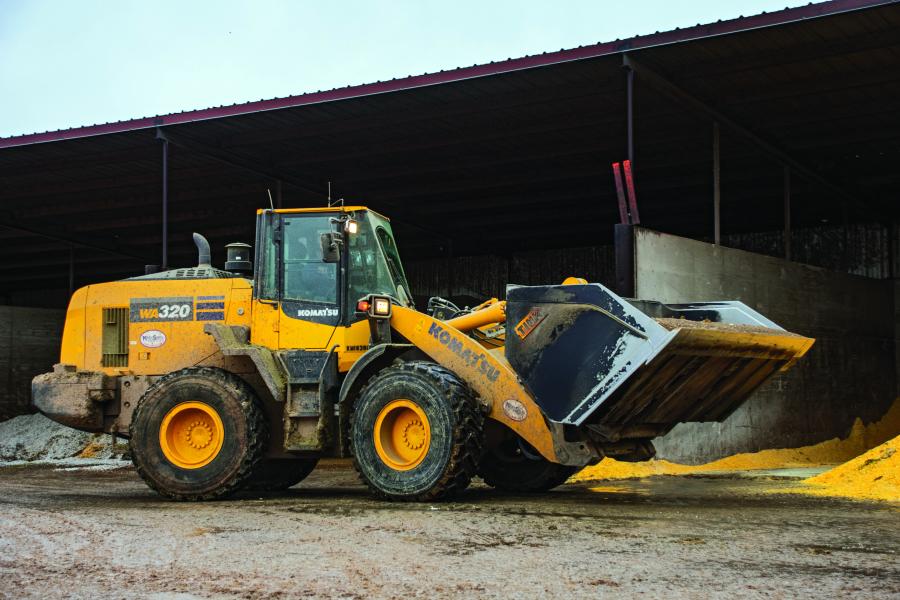 Approximately one year ago, Cnossen Dairy added four Komatsu WA320-8 wheel loaders to its operation. Their primary task is to dig into stockpiled feed products and load them into mixers. The 34,000-lb.-plus loaders are slightly larger and have more horsepower (165 hp) than Cnossen's previous machines.

"The loaders sped up operations and increased our efficiency by between 20 and 30 percent," said Cnossen, noting that occasionally the dairy uses them to clean corrals. "We're able to load mixers three to four minutes faster with the WA320s, and when you run 60 to 70 loads of feed per day, that's a big savings in fuel and labor. They are very user-friendly and easy to operate, too."

Cnossen purchased the loaders with the assistance of Britt Stubblefield, Kirby-Smith Machinery territory manager, who also helped Cnossen rent a compactor and an excavator. They worked together to ensure the loaders were equipped with the right buckets to fit the dairy's specific application. 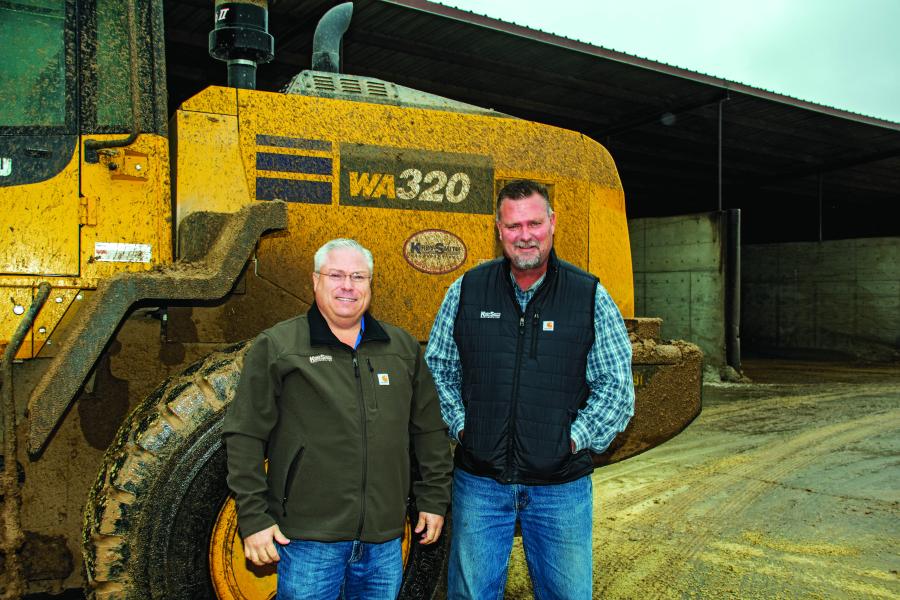 "We're not handling high-density, heavy materials like in earthmoving, so going to a larger rollout was feasible, and the WA320s carry our loads without issues," Jim pointed out. "They hold 6,000 to 7,000 pounds easily, allowing operators to get the same volume as before with one scoop."

Routine scheduled service is complimentary through Kirby-Smith for the first 2,000 hours or three years under the Komatsu CARE program. Cnossen believes it's a good way for his service personnel to become familiar with the loader before performing the work themselves.

"My mechanics can watch Kirby's techs and learn from them," he said. "When Komatsu CARE expires, they will know what to do. That's excellent value. We have come to expect great service from Britt and Kirby-Smith. Before we bought the WA320s, we rented some equipment from them, and they let us demo the loaders to make sure they were the right fit. Our relationship has grown because the equipment is good, and they stand behind it. If we have a need, I can call Britt or anyone at Kirby and know it will be addressed as quickly as possible."

As many as 50 calves are born every day at Cnossen Dairy. Heifers are kept (bulls are sold) and transported to a calf ranch where they are vaccinated and raised for five months before returning to the dairy. The Cnossens recently began buying Jersey cows, giving the business a mix of that breed as well as Holsteins. 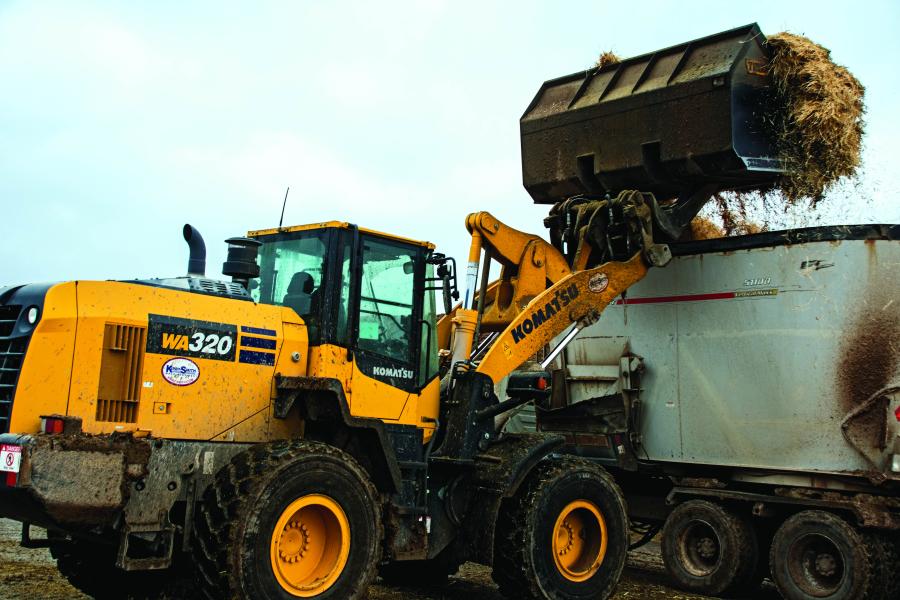 "Jerseys are smaller, so they eat less, although, in turn, produce a lot more solids such as butterfat and protein, which are more profitable," said Cnossen. "Holsteins have always been our staple, and they give the most milk. It's a good combination for us."

Cnossen and his family also are looking for innovative methods to be more efficient, increase profitability and add value for customers.

"I think we can be more vertically integrated and provide some manufacturing," Cnossen said. "I believe it's possible to take more water out of the milk. Currently, it's about 85 percent. Cutting that in half would allow us to keep more water on site, which could be used on the crops.

"We're always forward-looking, whether it's in raising cows with better genetics or finding ways to improve operations," he added. "At the same time, we honor the past, our roots and where we came from. We're proud that the kids are involved and want to be a part of Cnossen Dairy's future. It's a great life."

(This article originally appeared in the Kirby-Smith Connection which is produced by Construction Publications, Inc.)