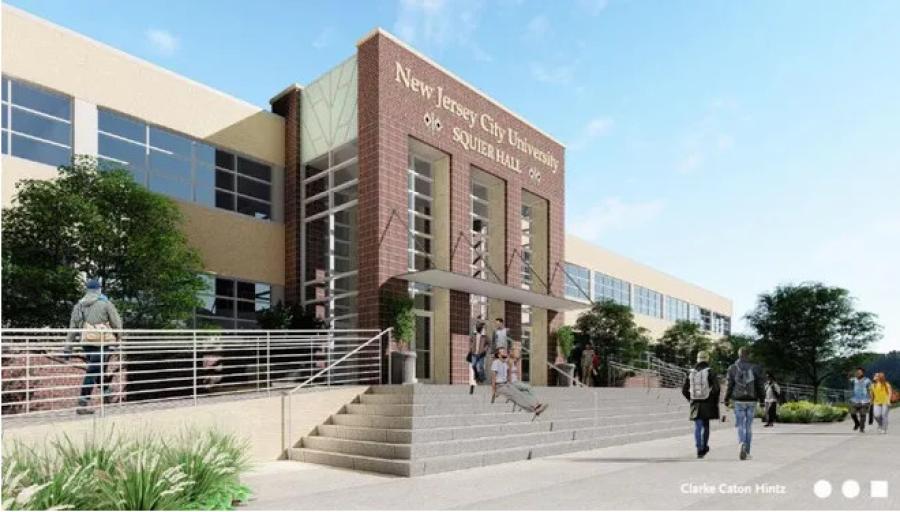 Students should be able to walk through the doors and into the light-filled, high-tech new campus of New Jersey City University (NJCU) in Oceanport beginning this July, said Michael Edmondson, the school's director, during a tour of the facility on March 11.

The former Fort Monmouth administration building known as Squier Hall remains a work in progress with multiple contractors working at full speed inside and out. Delays caused by COVID-19, including delivery of materials, prevented the school's originally planned fall 2020 opening.

Some 350 NJCU students currently attend classes at nearby Brookdale Community College in an arrangement that has been in place for 15 years, Edmondson said. That lease will end when NJCU students begin moving to the Oceanport campus this summer. A full launch is anticipated for early fall, he added.

The school's main campus is in Jersey City.

"We hope to complete construction by the end of May," explained Edmondson. "We can now advance our mission to provide a diverse population with an excellent education, targeting and better serving people in the four surrounding counties, including an estimated 100,000 veterans."

A Nursing Education Center will include an intensive care unit and a skills lab with four beds for hands-on learning, along with a mock apartment where students will learn to help patients navigate their everyday lives. Behind one-way mirrors in an adjacent room, professors will use computers to create high-fidelity simulations and monitor students' performance.

Both NJCU's nursing and cybersecurity courses have been nationally recognized for academic excellence. The college's Professional Security Studies department received the 2020 ASTORS Homeland Security Award for Cyber Defense, National Security, and Intelligence programs, the only institution of higher education in the nation honored by the organization.

Also, within the new facility, business students will be able to avail themselves of a computer lab containing a Bloomberg Terminal offering access to the stock market. A café, four lounges, a general computer lab, a quiet study room, faculty space and room for professional groups to hold catered events will all be part of NJCU's first phase.

"We hope chambers of commerce, state associations and law enforcement will hold seminars, classes and events here," Edmondson said, adding there are opportunities for sponsorships of new spaces like NJCU's outdoor courtyard and back patio. "We are looking for donors who might want to dedicate these spaces to family or friends."

Some rooms in the refurbished building overlook Parker Creek, which borders a portion of the former U.S. Army post. As part of its purchasing agreement, NJCU will construct a promenade along its property that will connect with sections being built by other developers along the banks. The 72,000-sq.-ft. building on 22 acres was constructed between the 1930s and 1950s, according to Edmondson.

Del-Sano Contracting Corp., from West Long Branch, N.J., is the builder of the $23 million NJCU project.

Several small obsolete buildings on the property will be demolished before the enterprise is completed.

The original plans for NJCU on Fort Monmouth called for a residence hall, another academic building, an athletic center, a performing arts center, a parking garage and athletic fields. Those plans were scaled back following input and objections from Oceanport residents and some officials. Mayor John "Jay" Coffey supports having a college within the borough's borders.

"Only the first phase was approved," Coffey said, adding, "Further development would be years down the line. Having a college campus on this site is a benefit to Oceanport. It enhances the entire fort project and will reflect positively on Oceanport as a place to live and work. Additionally, it will pay real estate taxes. A school that pays taxes is a unicorn."

Bruce Steadman, executive director of the Fort Monmouth Economic Revitalization Authority (FMERA) added, "We look forward to the restoration of one of the fort's historic assets, Squier Hall, and the opening of NJCU. [The] new campus will provide an affordable and fulfilling education for students interested in completing a four-year degree. [It will grow] the talent base in Monmouth County, as well as provide career opportunities through the fort's thriving businesses and organizations in the future."

The 1,126-acre Fort Monmouth, which spans portions of Eatontown, Oceanport and Tinton Falls, has been undergoing an extensive mixed-use redevelopment since it was closed by the Army in 2011. Approximately three quarters of the properties have been sold, are under contract or in the negotiations process. More than 25 parcels have been sold to date. Some businesses and residences have already been completed and are operating. More are expected to open later this year.