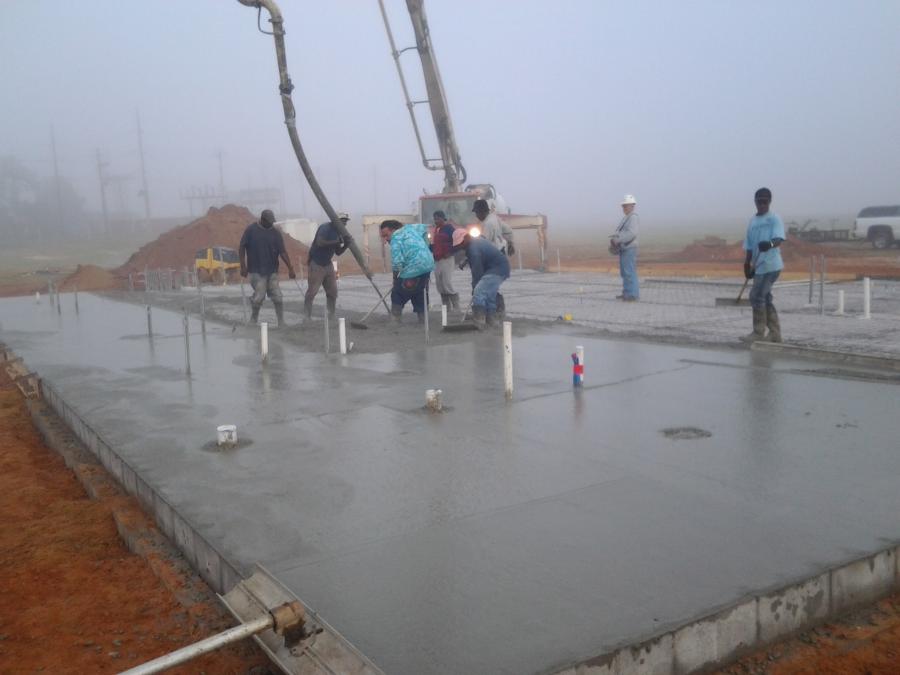 Ronnie Peacock, GenCon photo. The current project has been carried out in phases.

After years of planning and discussions, a new airport terminal building in Ozark, Ala., is finally opening its doors. A September ribbon cutting marks the end of construction on the highly anticipated project, which had to meet Federal Aviation Administration and Alabama Department of Transportation guidelines.

GenCon Associates Inc. of Dothan, Ala., began its work on the general aviation terminal for business use in late 2015.

“We didn't start until November, because of weather delays with the building pad preparation,” said Erik Vogt, GenCon vice president. “As the general contractor, we were responsible for insuring the new terminal for the city of Ozark was built per the plans and specifications. Our municipal and utility division did the site utility work, which included sewer and water supply.”

The current project has been carried out in phases, including taxiway grading/utility relocation/drainage, detention pond construction, taxiway/apron base construct, building the general aviation terminal, along with the entrance way/vehicle parking lot and paving of the apron.

“This job went really smoothly, other than the weather. Stephanie Blankenship, the airport's director of aviation services, was a pleasure to work with. She was very professional, and had a keen eye for detail. We also had a very good on-site superintendent, Ronnie Peacock. Stephanie and Ronnie maintained good communication throughout the entire job.”

As the project progressed, workers focused on completing paving of the entrance way to the terminal from U.S. 231, the aircraft parking apron and vehicle parking lot. On the front end of construction, Vogt said the elements played a major role.

“The building pad was being constructed by the initial site work contractor, and they were delayed because of weather. Because of this, we did get off schedule a little, but were able to get back on track after framing.”

Roughly 10,000 cu. yds. (7,645 cu m) of dirt was moved during construction. During the sewer installation, a large cut was present on a very visible portion of the job site right off of 231 North.

The project also has personal significance for Vogt.

“Having served in the Army National Guard for eight years, I have a deep passion for aviation. I met my wife while attending flight school at Ft. Rucker. This project was a great way to get back in contact with some fellow aviators.”

Blankenship, who also serves as executive director of The Aviation Council of Alabama, said, “The city of Ozark made a commitment over 10 years ago to have a terminal built at the Ozark Airport - Blackwell Field. The process began during the expansion of Bell Helicopter, which included the purchasing of a subdivision including a church and approximately 25 houses and the relocation of a city road. This acquisition was necessary to extend the runway length to its present length of 5,200 feet. It also included the relocating of a taxiway and large amounts of excess soil. That soil was relocated to the present terminal location, which raised the elevation it is today. This entire project, which included the Bell Helicopter expansion, was in excess of $28 million.”

Blankenship said that funding for this type project is always a challenge for a city the size of Ozark.

“We have worked many years to show our city council, citizens, State of Aeronautics Division, Federal Aviation Administration and our state and federal legislative delegation the need for such a complex located on Ozark Airport-Blackwell Field. We all worked together, and felt the timing was right for the funding through the various agencies to begin the project.

“Three and-a-half years ago, the vision of the mayor and city council for a state-of-the-art general aviation terminal finally began to come true. The city hired an architect, who began working in conjunction with the aviation engineers and city to formulate the plan for what you see on the site today.”

“The terminal is equipped with high-speed Wi-Fi, video conference capabilities, emergency command post capabilities, video surveillance, a security system and cable service displayed on large-screen televisions in all rooms,” Blankenship said. “We are able to meet the needs of the travel public, business meetings and all aviation needs.”

Blankenship said having the proper exposure was crucial.

“Ozark Airport - Blackwell Field runs parallel to U.S. Highway 231, but before this project it wasn't visible from the highway. To access the airport, one must take a road which circled around and was difficult to locate for those unfamiliar with Ozark. We felt having the airport and the new general aviation terminal visible would help with the economic development effort, in the attraction of companies to the area. Now, traveling down U.S. Highway 231, there is no doubt the city is proud of its airport.”

The overall airport project was featured at a meeting in Montgomery, Ala., and is considered a model for others throughout the state. The ribbon cutting, featuring a handful of business turbo props and jets flying in for the occasion, marks a re-dedication to growing the economy in the Ozark community.

“Aviation opens the door to many opportunities, and any opportunity to highlight aviation and its importance in the community is a chance to show Ozark's dedication to not only the aviation community, but also economic growth,” said Blankenship. “The mayor and city council were an indispensable part of achieving this success. Without their support, a project of this magnitude would not be possible.”

While designed with corporate aviation traffic in mind — Ozark Mayor Billy Blackwell said the terminal also will be available for meetings and local events. Spurring new growth, however, is key.

“Here in southeast Alabama, like other small towns, we try to find something that will help give us an advantage and separate us from other communities. We've been working on this for so many years, and we know it will help with economic development,” Blackwell said.

“About six years ago, we purchased the land for this terminal, then with FAA funding did clearing and site work and in phases did paving, the taxiway lighting, ramp area, access road and then the terminal building. This was all done as we were able to get funding through the FAA and State Department of Aeronautics.”

Blackwell said completion of the long-awaited project is both rewarding and exciting.

“The entire community is looking forward to the opening. It's great to be able to recognize all the entities involved in this effort, which are many, and the local support that we've had. This is about looking back on our history, and looking ahead to the new.”

Blackwell said, “It's a source of pride for our whole community. You start with a plan, and have to keep your eye on the goal. Reaching that point is very special to all of us. Ozark Airport Blackwell Field was named for my father, who died in 1951. He was one of the first people in the area to have a private plane, and was a real aviation supporter for our community. In 1960, when the airport was built, it was named in his memory. This is a tremendous event for my entire family.”

The design team also was honored to be part of the project.

According to architect Chad Brown, AIA of Dothan-based J. Michael Lee Associates Inc., “Our mission was to help bring the client's vision for the new terminal to reality. The biggest challenge was trying to make sure the project stayed in budget, yet met all the program requirements.”

“The exterior palette of colors came directly from the nearby aviation college,” Brown said adding that the high-tech conference room is large enough for roughly two dozen people.

“We designed and built a custom table that has built-in power for the running or charging of personal electrical devices.”

As for what he hopes visitors, pilots and staff take away from the new structure, said Brown, “We have created a first-class general aviation terminal building that will meet all their needs. It also will be the first thing they see when arriving in Ozark. so the impact and first impression it makes will be a great one.”

Brown said it was particularly rewarding to be part of the project.

“I grew up in the Ozark/Dale County area, and still live just minutes away from the airport. Anytime I can be a part of a building project in the area, it gives me extra satisfaction when I can help my community.”

Ozark Airport - Blackwell Field is located two nautical miles southeast of the central business district of Ozark, in Dale County. The airport is owned by the city of Ozark. It is included in the FAA's National Plan of Integrated Airport Systems for 2011 to 2015, which categorized it as a general aviation facility. Ozark Airport - Blackwell Field covers an area of 114 acres at an elevation of 357.9 ft. (109 m) above mean sea level. It has one runway designated 13/31, with an asphalt surface measuring 5,152 by 80 ft. (1,570 by 24.3 m)