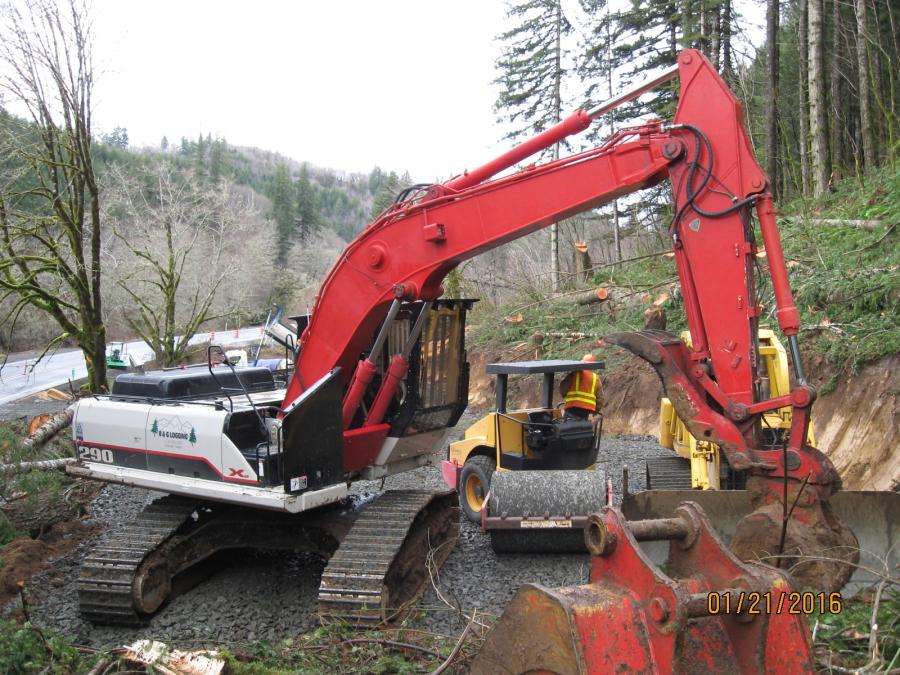 Project leaders on the Pioneer Mt. — Eddyville Highway 20 project are readying to make the final big push on the last construction phase of this overdue project.

Part 2 of a 3-part series: Project leaders on the Pioneer Mt. — Eddyville Highway 20 project are readying to make the final big push on the last construction phase of this overdue project. Phase four will involve straightening one final hard curve, building buttresses for landslide mitigation, paving, striping and installing guard rails and drainage. Crews also will put in a 28-ft. (8.53 m) culvert under the highway to be used as a wildlife crossing.

“This is really the beginning of the end, said Oregon Department of Transportation project leader Jerry Wolcott.

The project to replace 10 mi. (16.09 km) of narrow, twisting roadway with 5.5 mi. (8.85 km) of straighter road with passing lanes and wide shoulders has been in the works in some form or another since the environmental impact statement was completed in 2004. Originally set to open in 2009 at a cost of $150 million, the project is now set to open in the fall of this year at a cost of more than double the original budget. Work was brought to a halt in 2010 when it was discovered that ancient landslides had moved bridge support columns — some more than 100 ft. (30.5 m) tall — out of plumb. In 2012, ODOT took control of the project, originally awarded to Yaquina River Contractors, a subsidiary of Granite Construction Co. of Watsonville, Calif., destroyed several bridges and redesigned the new roadway.

Phase four goes to bid April 21 and ODOT expects work to proceed by mid May.

“The main focus for this phase four is the west end curve,” Wolcott said. “As we finish the new alignment, there is a hard left-hand turn going west bound. We're afraid people will pile up in the rock face. So we're going to straighten that out. We'll take the last hard turn on the old alignment and make it so it is all one complete section.”

This last phase also may be the most challenging for travelers as it will force road closures for significant portions of the day.

It involves removal of 350,000 cu. yds. (267,594 cu m) of rock and dirt. Crews have already logged the area to make sure the trees were down before the bird-nesting season. The steep hill drops off to the highway and beyond the highway is the Yaquina River.

“So there is about five feet of overburden,” Wolcott said. “We'll have to clear the stumps, remove five feet of dirt and then it is all rock. It's just hard enough that it can't be ripped with a dozer. It is going to have to be blasted. We expect blasting operations on a daily basis. The challenging part is there are layers of sandstone and layers of siltstone and so when you blast, one is real soft and one is kind of hard. You have to dial in that blasting so you don't create a huge explosion that sends everything flying everywhere or leave yourself with oversized rocks that have to be picked with excavators.”

All that blasting will close the road at different hours for varying lengths of time. From June 1 to July 15, ODOT is expecting two-hour closures six days a week. Then, from June 17 to July 15, it will be the same, but due to the blasting there will be one hour when even emergency vehicles will not be able to get through. From July 16 to Oct. 31, they are anticipating 10-hour closures.

“That's the worst case scenario,” Wolcott said. “We're hoping to get something better from a creative contractor. We're hoping we get a contractor who has innovative ideas that will allow us to keep the road open longer and have shorter closures.”

Plans also call for the building of a temporary haul bridge over U.S. 20 so that crews will be able to work 20-hour days, six days a week. They'll use the large off-road Caterpillar 735s to haul the dirt excavated from the hillside to the west end curves and also for landslide mitigation at the Cougar Creek Drainage.

“In doing this, we've saved money and increased our factor of safety at the particular area,” Wolcott said. “By using off-road trucks, we can haul more dirt more efficiently.”

The new highway is already attracting people from all over who have asked to come see it.

“When people go through there, they cross the Coast Range; they see the size of the cuts and the layers of the rock,” Wolcott said. “It's also interesting to see the horizontal drains. They are half inch perforated pipes that go back into the hillside. They can pull water all year long.”

ODOT plans an open house in May, and later will invite people to take a look at the new alignment on foot, bike or by skateboard before the state puts traffic on it.

“We'll do that on a day when there is no construction activity in the late summer,” Wolcott said. “The ribbon cutting will be in late fall. When ODOT took over the contract, we promised the state legislature that we'd be done in 2016. Everything is going as according to plan.”