House of Representatives passed a defense spending bill that provides budget for military construction projects on Guam, but does not include a provision for local contractors to use foreign labor. 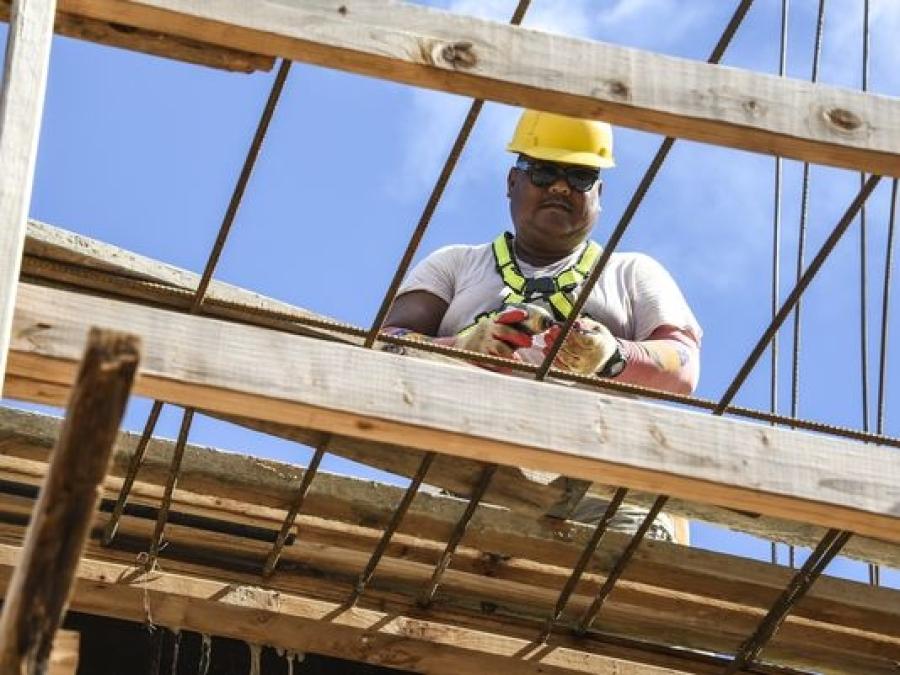 Carpenter Negs Barrozo prepares to fasten lumber together into a form, as he and other 5M Construction Corporation employees, work at a building project in Tamuning on Tuesday, Oct. 4. (Pacific Daily News photo)

The U.S. House of Representatives on Friday passed a defense spending bill that provides $170 million for military construction projects on Guam, but it does not include a provision by Guam Del. Madeleine Bordallo that would have made it easier for local contractors to use foreign labor.

Bordallo acknowledged that immigration-related legislation doesn't have support from Republican leaders in Congress. “I am deeply disappointed that my language to address the H-2B visa challenges on Guam was not included in the final conference report,” Bordallo said.

At the request of Guam's construction industry, Bordallo tried to change the defense spending bill to address a nearly 100-percent rejection rate for workers on H-2B visas. Hundreds of foreign workers have been sent home this year after their Guam employers couldn't get their H-2B visas renewed or approved.

Guam's construction industry lobbied for more flexibility in hiring skilled foreign workers, such as masons, electricians and plumbers, in light of the anticipated increase in military projects related to the proposed Marine Corps base construction.

Twelve Guam businesses on Oct. 4 sued the United States Citizenship and Immigration Services, arguing it recently has been improperly denying nearly all visa applications for the use of foreign workers after decades of approving about 95 percent of visa requests. They have asked the federal court to grant an injunction, requiring immigration officials to reverse their denials of H-2B visa requests, and to extend the visas of existing foreign workers.

Court documents state federal immigration officials started rejecting applications after determining Guam businesses have not been using those workers temporarily, as intended by the program, with many businesses relying on large numbers of foreign workers for years at a time.

Bordallo's proposed change to the defense budget bill would have exempted foreign hires from meeting the legal requirement of being "temporary" in order to get visas to work on Guam or in the Commonwealth of the Northern Mariana Islands. Her amendment applied only to those who work on military-funded projects or who work in health care.

“The Senate Judiciary Committee majority viewed this provision as part of broader immigration reform, which still has a toxic perception among some Republican members,” Bordallo said in a written statement.

She said the provision dealing with Guam's shortage of skilled workers “was carefully crafted to deal with the emergency situation on Guam and coordinated with the House Judiciary Committee and Obama Administration."

“Unfortunately, Republicans on the Senate Judiciary Committee had serious reservations about this provision and fought to exclude it from the final conference report,” Bordallo said.

Other provisions in the broader defense policy bill include, according to the House Armed Services Committee:

For three years in a row, President Obama has denied service members the pay raise to which they are legally entitled, according to the committee's summary of the legislation. The president previously approved a 1.6 percent pay raise.

- Halting and reversing the reduction of U.S. troops.

The legislation preserves the Army at 480,000 soldiers, Marines will add 3,000 recruits, and the Air Force will add 4,000 additional airmen, according to the legislation.

"This bipartisan bill focuses on our troops ... provides them a full pay raise for the first time in four years, it stops layoffs of our military personnel and actually increases the end strength of our Armed Forces, and it starts to stabilize the readiness problems that are making it more difficult for our troops to accomplish their mission and increasingly represents a danger to their lives," said Rep. Mac Thornberry, chairman of the House Armed Services Committee.

- $78.8 million for the first phase of replacing old housing units at Andersen Air Force Base.

The air base also is expected to host families of some of the close to 5,000 Marines who are being moved from Okinawa to Guam over the next several years.

Guam is followed by the U.S. Air Force base in the United Kingdom, at $69 million and Ramstein Air Base, in Germany, at $43 million, according to the committee data.

- Navy facilities in Guam will get a military construction budget of $89 million, also the highest of the U.S. Navy installations overseas.