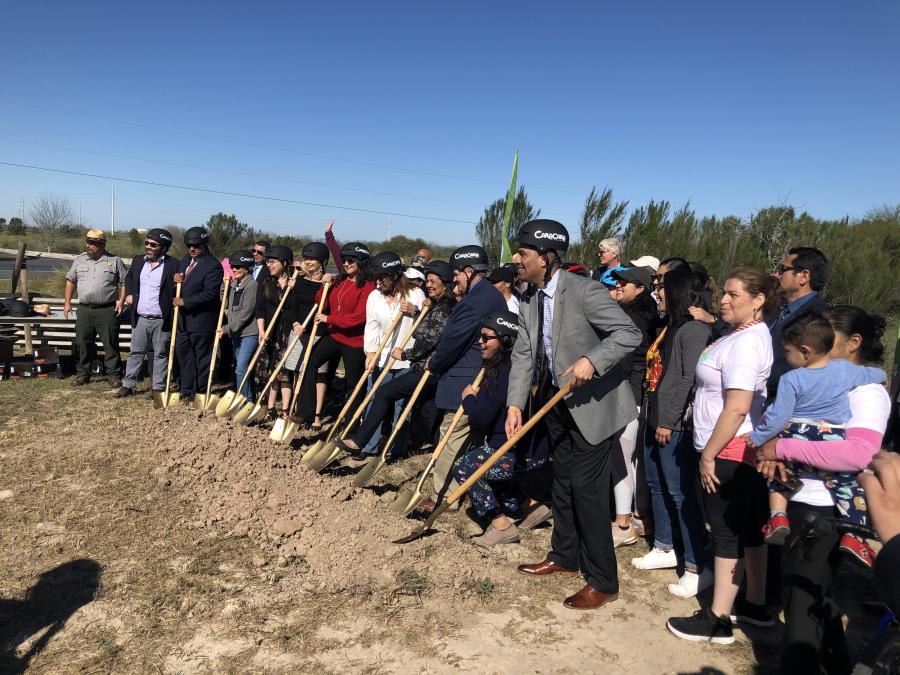 A ground-breaking ceremony was held on Jan. 29 with Rails-to-Trails Conservancy (RTC), the city of Brownsville, and the National Park Service. (Rep. Filemon Vela photo)

BROWNSVILLE, Texas (AP) In a chilly breeze under a warm sun, officials and onlookers gathered at the Palo Alto Battlefield National Historical Park last week for the ceremonial groundbreaking of a project to extend Historic Battlefield Trail from Palo Alto nearly all the way to Los Fresnos to the north.

The Valley Baptist Legacy Foundation will pay the entire cost of the 1.8-mi. extension. The short link connecting the extension to Los Fresnos will be paid for with funds from the Federal Highway Administration's Transportation Alternatives Program.

The Battlefield Trail extension is the first of six catalyst projects in the vision for Caracara Trail (formerly the Active Plan), a 428-mi. network of on-road, off-road and water trails that will eventually connect Brownsville and 10 other cities and towns in Cameron County. The network is named for the crested caracara, a type of falcon common to the region.

Before the start of the groundbreaking ceremony, Brownsville City Commissioner Rose M.Z. Gowen, whose helped develop the network, described the plan as unique, bold and proactive.

"It is of course going to be very expensive, and that is not dissuading us, but rather motivating us to find grant dollars like these, thanks to the Legacy Foundation, who is paying for this segment,"' she said.

Caracara Trails is one of just eight TrailNation projects in the United States under the Rails-to-Trails Conservancy, an organization dedicated to creating a nationwide network of trails from former rail lines, and connecting those corridors. The proposed West Rail Trail, along a former Union Pacific railroad line in Brownsville, is part of Caracara Trails, which was featured in RTC's official magazine in 2017. The network also has been highlighted in the Austin Chronicle, Daily Beast and Texas Monthly.

In addition to Brownsville and Los Fresnos, the cities of Combes, Harlingen, Los Fresnos, Los Indios, Port Isabel, Rio Hondo, San Benito, South Padre Island, and the towns of Laguna Vista and Rancho Viejo, are partners in Caracara Trails and will eventually be linked via the network.

Gowen, an RTC board member, said the network will positively affect public health by providing residents with more opportunities to be active, and make the county a destination for active tourism.

"That means a new segment of tourist dollars that we've never seen before coming into Cameron County," she told The Brownsville Herald.

Gowen said active tourism is one of the fastest growing sectors of the national economy and generates millions of dollars in tourist revenue in some areas. She predicted Caracara Trails will be a big draw in part because of the Lower Rio Grande Valley's natural, historical and cultural assets — not to mention the weather.

"We have never been identified as an active tourist destination, despite the fact that we have wonderful winters," Gowen said. "We're standing outside on a gorgeous day in late January. In other places you can't even go outside your home.'"

Belinda Reininger, regional dean for the University of Texas School of Public Health and a leader in creating the Active Plan/Caracara Trails, said research shows that people with access to trails are more likely to meet physical activity guidelines _ enough to have an impact on health. Besides, being outdoors and surrounded by nature is good for mental health, she noted during the ceremony.

She called the groundbreaking a momentous occasion and said UTSPH is happy to be part of the trail effort.

"We know that as the network continues to build out, it will be these kinds of amazing partnerships — of volunteers, advocates, planners, city leaders, the private sector, foundations — coming together to make this happen," she said.

Los Fresnos City Manager Mark Milum said his city is a few months away from going out for bid on construction of a trail system that will encircle Los Fresnos using existing canal and drainage ditch easements. The Legacy Foundation is providing $500,000 for the project and the Texas Parks and Wildlife Department $200,000, he said.

"We've always wanted to be able to connect our residents with Brownsville, and with what Brownsville's already done, our folks [will be able to] go from Los Fresnos all the way to downtown Brownsville on trails," Milum said. "I can't wait till we can do the same to San Benito and Harlingen, and then as well to the Island.

"Partnerships and relationships are what make things happen. Thanks to everyone here, because there's so many players that made that happen. When we do that, we can change the world and make a difference."