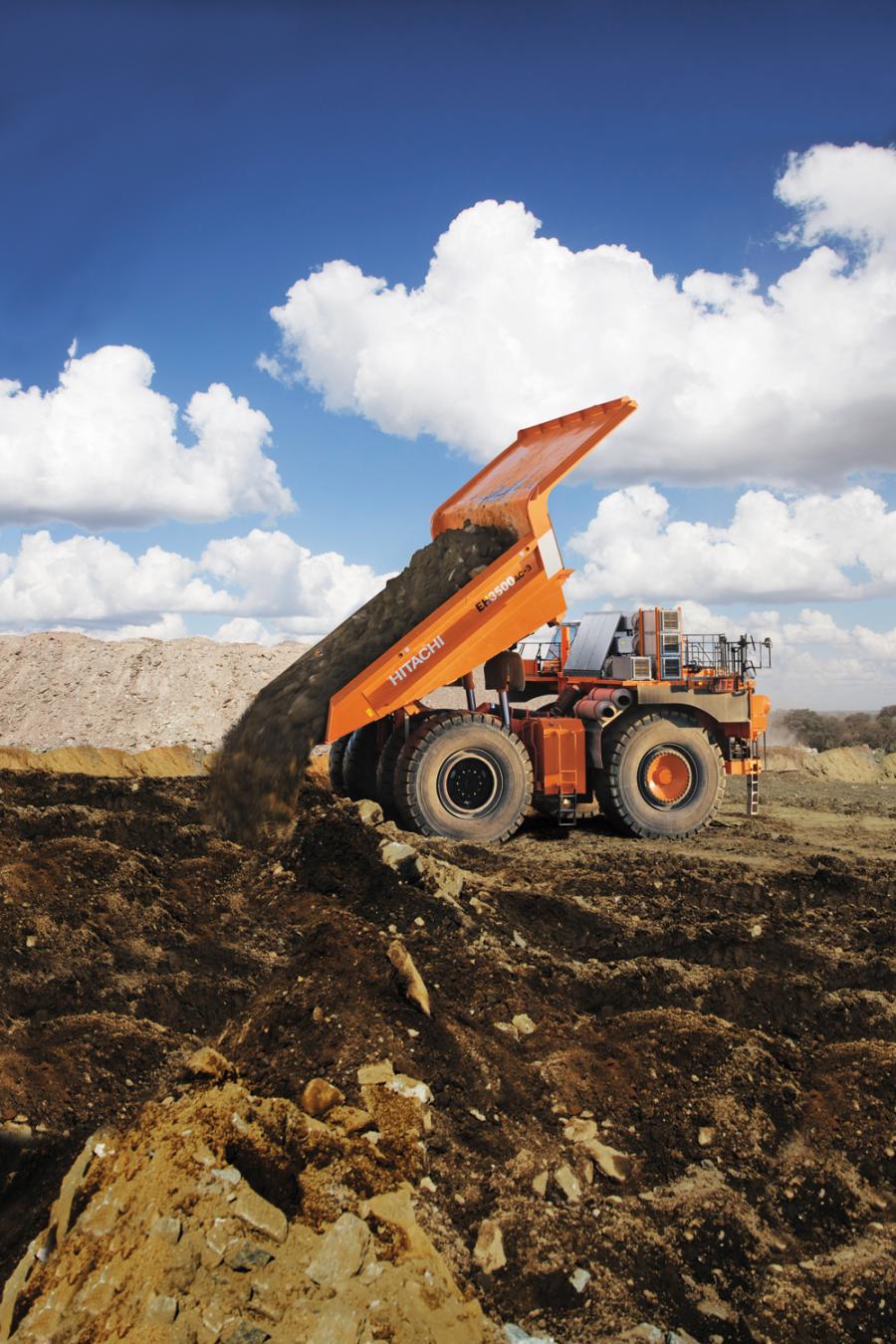 The two rigid-frame haul truck models are equipped with an advanced AC-drive system that was developed with Hitachi Group technologies employed in conventional models. Improvements include various sensors that provide information on drive conditions. The result is the Hitachi drive control system that reduces tire slippage on acceleration and tire lock-up during braking, and prevents chassis oscillation in a front-rear direction and tire skid while steering, according to the manufacturer.

In addition, to satisfy the request of customers worldwide, Hitachi is giving customers outside of North America a choice between engines from two different companies. This option also is available for the EH5000AC-3 rigid haul truck, which was launched in February 2013.

The release of these two rigid-frame haul truck models completes the lineup for the EH AC-3 series of haulers equipped with an AC-drive system. Along with the company's ultra-large hydraulic excavators, for which Hitachi boasts a high market share, Hitachi plans to supply these rigid haul truck models to contribute to the improvement of productivity at mines around the world.

Hitachi couples the AC-drive system, which has a high load-responsive IGBT inverter, with drive control software that was jointly developed with other Hitachi Group companies, to achieve a system that excels in controlling travel motor speed and torque.

Whether taking off from a standstill, ascending grades or performing steering maneuvers, the system delivers an optimal, individual amount of power to each of the travel motors for smooth, quick operation.

In addition to adding various sensors that detect vehicle motion, this is the first time in this class of machinery that models employ the Hitachi drive control system, which aims to achieve higher drive control performance by reducing tire slippage on acceleration and tire lock-up during braking, and preventing chassis oscillation in a front-rear direction and tire skid while steering. Consequently, the trucks boast strong and steady travel performance that ensures more stable jobsite haul-cycle times, which contributes to higher productivity.

These two models also feature powerful electric brakes that are activated during downhill driving. Since these trucks do not require the use of mechanical brakes during normal driving, not only is deceleration smoother but maintenance for the mechanical brakes is required less frequently.

In the wide-berth cab, which is capable of housing two full-size seats, a large LCD display is located at the base of the handle. The display is in clear view and quickly provides the operator with information and warnings on drive operations such as traveling speed, engine turnover and hauling performance. In addition, the multilingual display allows users to view information and warnings in their own language, thereby contributing to improved serviceability and safety.

Due to a powerful electric brake, the haulers can be normally operated using two pedals, one for acceleration and one for the brakes. Easier operability alleviates operator fatigue.

Hitachi located the levers and switches for operating the body in the center console, making it possible to operate the body with one hand.

The mainframe's structural design, including the cab support, is improved and fortified based on operating information Hitachi gathered on conventional models being used around the world.

The company added a temperature sensor to the bearing area of the alternator and drive motor, which are the main components of the AC-drive system. An alarm sounds when the sensor detects abnormal heat emission and restricts driving operations to prevent sudden damage to the machine.

ROPS and FOPS are built into every truck cab as a standard safety requirement to withstand the impact of falling objects or a truck rollover. Other standard safety features include two mirrors with front and rear view cameras to provide extensive truck perimeter visibility, ample width truck access stairways and four engine stop switches located outside the cab to allow the operator to turn off the engine in an emergency situation during maintenance. In addition, the wide cab features ample foot space to improve the operating environment.

The peripheral vision support system feature provides another view to support the operator.

The evacuator exhaust valve for the engine suction filter and electric grease pump are among the new features added to further improve daily maintenance.

Other standard features for maintenance include a trailing arm front suspension that permits strut removal without tire removal, a centralized auto-grease system accessible from the ground, a battery and relay box located in the front bumper for easy access, and a maintenance deck in the rear of the cab.

Outside of North America, Hitachi is now offering customers the option of choosing between the standard feature Cummins Inc. engine and one by MTU Friedrichshafen GmbH.