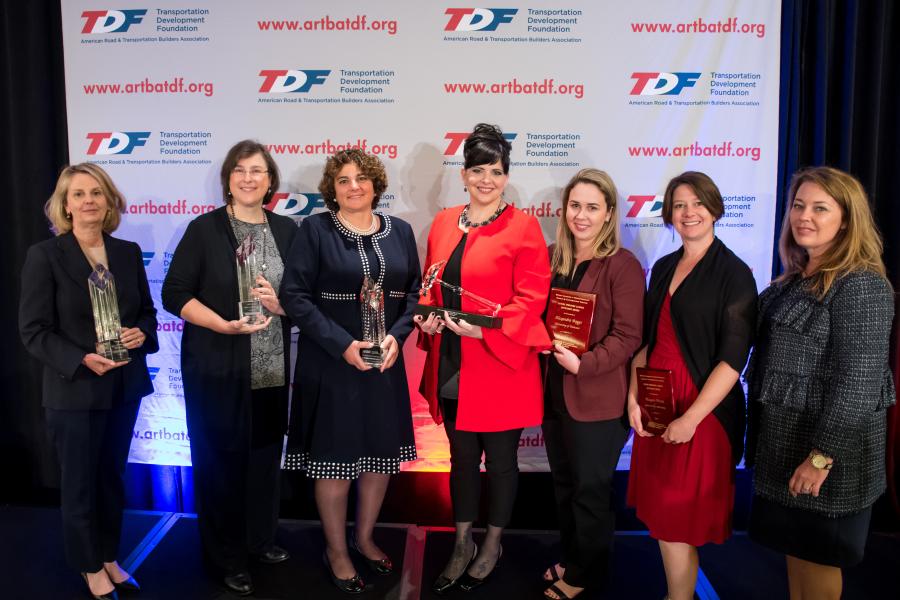 The awards were presented in three categories at an Oct 1. lunch held during ARTBA's National Convention in New York City.

This award is named after ARTBA's executive director from the mid-1920s and is given to individuals who have demonstrated outstanding leadership, long-term service in the industry's public or private sectors and dedication to the advancement of innovation and other women leaders.

Mendes leads 530 employees in seven states and the District of Columbia. Her commitment to advancing public transportation, promoting innovation in the transit industry and developing future generations of professionals is unwavering and includes three decades working for agencies across the country. She helped advance major transit investment in New York, Newark, Washington, D.C., Charlotte, Atlanta, Minneapolis, Denver, Salt Lake City and Portland. For more than 15 years, Mendes also has taught courses sponsored by the Federal Transit Administration and the National Transit Institute — which named her 2017 "Training Professional of the Year." She serves on the American Public Transportation Association's executive committee, is chair of the group's legislative committee, and is on the board of directors of the non-profit Rail-Volution.

An ARTBA vice chair at large since 2014, Tooley also is the former director of the University Transportation Center for Mobility at TTI, which she joined in 2006. She was previously director of the Mack-Blackwell National Rural Transportation Center at the University of Arkansas and an assistant professor of civil engineering at both U of A, where she was the first women to earn a Ph.D. in civil engineering, and the University of Florida. Her experience includes a decade of consulting experience on projects involving roadway design, flood control, construction management, forensic engineering, and civil infrastructure improvements.

Tooley has chaired national conferences for the National Academies, served on several Transportation Research Board Committees, and serves on the Board of Regents for the Eno Foundation. She was the first woman elected president of the Council of University Transportation Centers (CUTC) and has helped mentored five women who have served as CUTC president since her tenure. Tooley was the first chair of ARTBA's Women Leaders in Transportation Design & Construction Council.

Through the "Connected Women at Gannett Fleming" program, the company has worked to create a culture that "empowers, supports and mentors women to achieve career and personal success." The program, which also includes a Connected Ambassador initiative, gives women in all 60+ Gannett Fleming offices the chance to step forward and become local team leaders. More than 65 women currently hold such leadership roles and help organize activities that include fundraising for charities that serve women, networking events, and professional development. Just one year old, Connected Women is already affecting change in the recruitment and retention of female employees — including a 3 percent increase in the number of female employees — and its participants are committed to sharing resources with the rest of the industry.

This award recognized students enrolled in undergraduate or graduate studies at a U.S. college or university who have achieved an outstanding academic record and demonstrated extraordinary leadership skills within and outside of the academic environment.

Brown is pursuing a master's in industrial organizational psychology. Since September 2017, she has been a process improvement and change management intern at the Colorado Department of Transportation (CDOT). Her leadership work on the agency's "Lean Construction" initiative earned the interest, respect and sponsorship of its chief engineer and helped move a pilot effort to an active transportation project. Brown's managers cited an outstanding work ethic and dependability and named her a "team player and collaborator" who helped other group members work together more effectively. She was the lead content creator for CDOT's "Coaching for Improvement" course and led development of a new course for integrating change management with project management. She's also mentored other interns and produced webinars for a multi-state/multi-province "Transportation Lean Forum" utilizing her past experience as a teacher.

Boggs is pursuing a master's in statistics and a Ph.D. in transportation engineering at the University of Tennessee in Knoxville. She is an engineering student trainee in the office of highway safety at the National Transportation Safety Board, and aspires to reconstruct motor vehicle crashes and research transportation safety in order to reduce the number of fatalities and injuries on roadways. Recently, Boggs has been examining self-driving vehicle crashes and disengagements in California in the hopes that advances in technology and infrastructure can further reduce the number of fatalities on American highways. She is passionate about community outreach in the transportation engineering community, involving fellow students in several outreach events and co-founding her school's Women in Transportation Seminars (WTS) chapter to actively build membership.