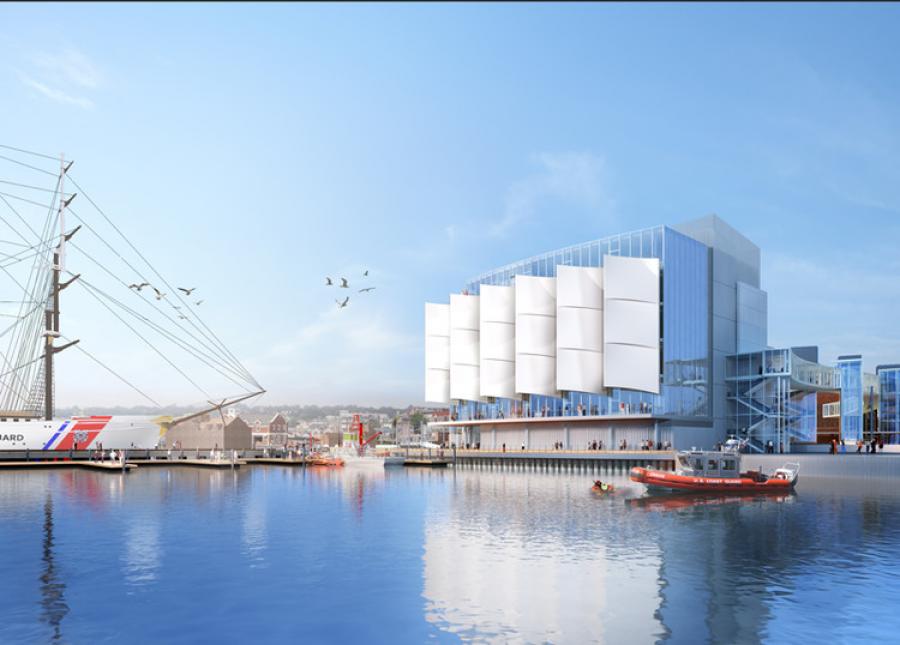 Once built, the National Coast Guard Museum will educate, engage and inspire visitors, showing how the men and women of USCG have faithfully served the nation since 1790 and how they continue to use technology to protect the nation's waterways, environment and commerce. (Payette rendering)

Connecticut Sen. Chris Murphy announced earlier in October that he is pushing for Congressional approval of a multi-million-dollar boost to the fundraising effort for construction of a National Coast Guard Museum in New London.

As chairperson of the U.S. Senate Appropriations Subcommittee on Homeland Security, Murphy included a proposed $50 million in the Fiscal Year 2022 Homeland Security bill, which provides discretionary funding of $71.7 billion, The Day reported Oct. 22.

Murphy's office noted that it would mark the first-time federal money would be directed toward construction of the museum, as it is exempt from previous restrictions. Previously, Murphy and fellow Connecticut Sen. Richard Blumenthal, along with U.S. Rep. Joe Courtney, cleared a path for use of federal funding on design and engineering elements of the estimated $150 million museum project.

In prior years, there has been $20 million in federal funds appropriated to the museum to preserve artifacts, and design, fabricate and install exhibits, according to The Day.

The new Homeland Security bill also includes $6 million for improvements to New London's City Pier to accommodate the Eagle, a barque expected to dock adjacent to the future museum along the city's waterfront behind Union Station.

Murphy, in a recent op-ed in The Day, highlighted the importance of the Coast Guard Museum and the need to jumpstart funding for its construction.

"It makes no sense that the Coast Guard is the only historic branch of the armed services with no national museum," he wrote. "The other armed services have over 77 museums between them."

Murphy noted that he sees the museum as an opportunity for new educational experiences for children and touted its potential to bring more visitors to southeastern Connecticut, create jobs and funnel upwards of $20 million a year into the region's economy.

Museum officials have said before that a large federal commitment to the proposed exhibit space was likely to bring in more private donations.

Fundraising for the museum began in 2014, around the time New London donated a 0.37-acre site to the Coast Guard to accommodate the future facility.

The National Coast Guard Museum Association reports $79 million in fundraising to date. Retired United States Coast Guard Capt. Wes Pulver, president of the group, welcomed the news of a large federal investment, and noted the possible $50 million from Congress would inch the museum association closer to its $150 million fundraising goal.

He said an estimated $30 million will be needed for exhibits and furnishing, of which $20 million is already committed in federal funds.

"Our Connecticut delegation, led by Sen. Murphy, Sen. Blumenthal, Rep. [Rosa] DeLauro and Rep. Courtney have been committed to working with their peers in Washington to secure additional authorities and resources in support of a premier National Museum in southeastern Connecticut," Pulver said in a statement. "When coupled with previously committed federal, state and private funding from across our country, we are well postured to begin construction Phase I in 2022."

The first part of the project is expected to include bulkheading portions of the waterfront in anticipation of construction.

Currently the project remains in the permitting phase.

The Day reported that the state of Connecticut has also committed $20 million toward construction of a pedestrian bridge to ferry people over Water Street and the train tracks to the museum and city's waterfront.

Courtney called the inclusion of $50 million in the spending proposal a "breakthrough step towards making this long-overdue museum a reality in New London."

"There are several steps left to go, but I will be strongly supporting this effort as the House and Senate start working on a final budget agreement for 2022," he told The Day.