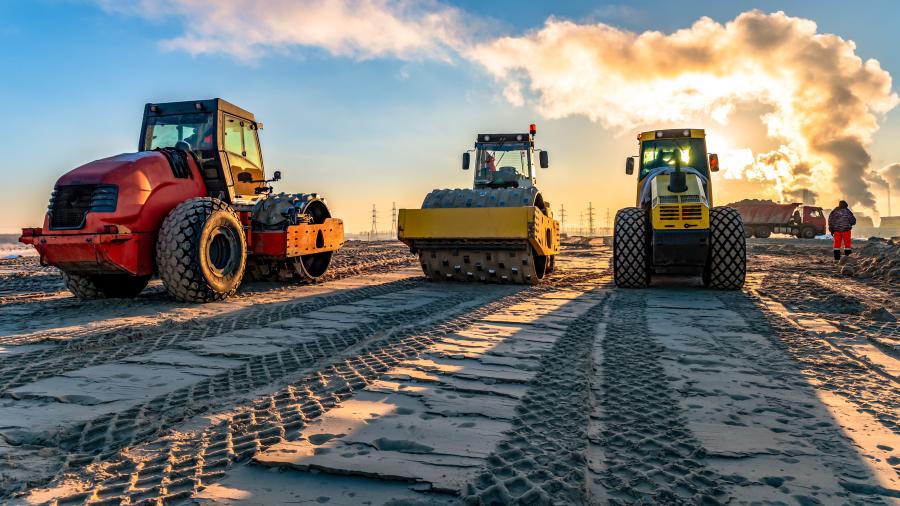 Soil compactors work on an embankment on a highway construction project.

The U.S. House of Representatives is set to vote on the $1.5 trillion Moving Forward Act, a massive funding package meant to regenerate America's transportation infrastructure as it gives a shot in the arm to health care, airports, clean energy, broadband, education, and drinking water. On top of that, it would create millions of jobs while the construction industry plugs along during the COVID-19 pandemic and spring recession.

"In the Moving Forward Act, we do that by modernizing the crumbling roads and bridges we already have; investing more than $100 billion in transit to put more zero-emission buses on the road, add new routes, and provide more reliable service; tripling Amtrak's funding; funding the essential dredging and upkeep of American harbors, ports and channels to keep cargo moving; and investing in new wastewater infrastructure to encourage efficiency and affordability, and help communities address stormwater needs, preventing pollution in local rivers," he continued.

House leaders understand that one of the best ways to promote new economic growth is by investing in the nation's aging, and often over-burdened, infrastructure, said Stephen E. Sandherr, CEO of the Associated General Contractors of America (AGC).

"These investments will create needed new construction careers, promote demand for new construction equipment and materials and ensure that the economy will be more efficient and effective for years to come. The new House infrastructure proposal will provide the kind of tangible benefits our economy needs to recover."

The proposed package takes several positive steps to ensure that its investments support high-quality jobs, said Karla Walter, senior director of employment policy at the Center for American Progress in Washington D.C. "COVID-19 has sparked a national recession that has left Americans from all walks of life reeling," she said.

"Federal policymakers can help get millions of Americans back to work by supporting economic recovery through investment in critically needed public infrastructure," she added. "Yet in order to maximize the benefits of this spending, policymakers must be intentional about ensuring that this investment creates good jobs that are available to all working Americans."

One-third of the $1.5 trillion funding package represents a five-year surface transportation reauthorization, dubbed INVEST in America. Dean Franks, senior vice president of congressional relations of the American Road & Transportation Builders Association (ARTBA), said the highway and transit portion would be paid for in part with a transfer of $145 billion to the Highway Trust Fund (HTF).

"The transfer would cover the shortfall between anticipated HTF user fee receipts and proposed spending in the measure," Franks said in ARTBA's Washington Newsline. 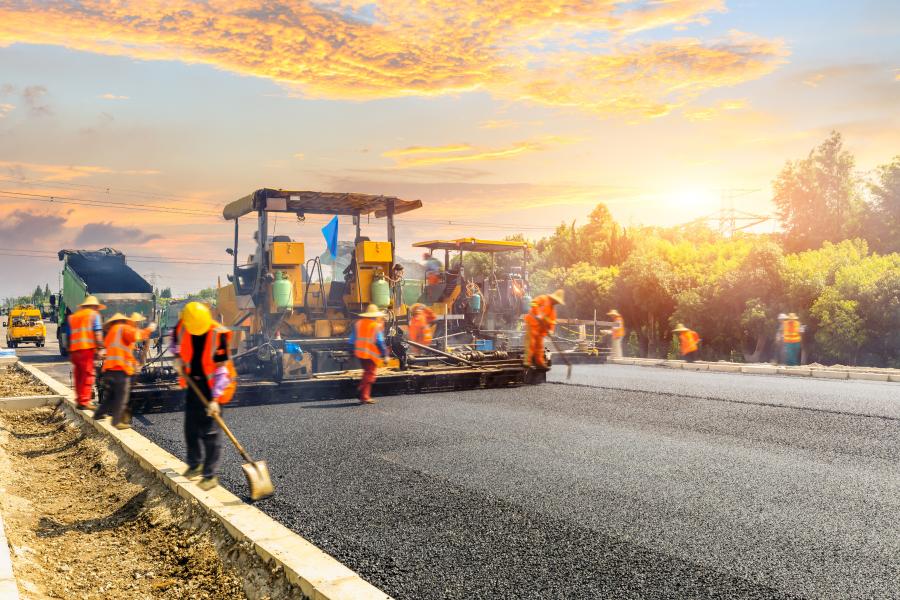 The proposed legislation would rebuild U.S. communities with infrastructure and innovation that is smarter, safer and made to last, touted the House Committee on Transportation and Infrastructure. In addition to rejuvenating roads and bridges, the bill would invest in public transit and the national rail network, building out fueling infrastructure for low- and zero-emission vehicles and deploying technology and innovative materials.

"The INVEST in America Act is fueled by American workers and ingenuity thanks to strong Buy America provisions and labor protections," stated the committee.

The bill also invests in schools through the Reopen and Rebuild America's Schools Act, a $130 billion package targeting the infrastructure of high-poverty educational facilities that endanger the health and safety of students and educators.

"This investment will help students get back to school and create more than two million jobs to help workers get back to work," according to the committee's statement.

It upgrades child-care facilities by leveraging a five-year, $10 billion federal investment in sure that child-care settings are safe, appropriate and able to comply with current and future health directives. The end goal would be to generate additional state and private investments.

"These investments will help reduce housing inequality, create jobs and stimulate the broader economy, increase community and household resiliency in the face of natural disasters, improve hazardous living conditions, and increase the environmental sustainability of our housing stock," according to the House transportation committee.

The bill invests more than $25 billion in the Drinking Water State Revolving Fund and other programs to ensure communities have clean drinking water. It also helps remove dangerous contaminants, such as PFAS, from local water systems.

It would deliver affordable high-speed broadband Internet access to all parts of the country through the investment of $100 billion to promote competition for broadband internet infrastructure in unserved and underserved communities. Priority would be given to communities with persistent poverty.

The legislation would get children connected to remote learning, closes broadband adoption and digital skills gaps and enhances payment support for low-income households and the recently unemployed.

It would invest $25 billion in the U.S. Postal Service to modernize infrastructure and operations, including a zero emissions postal vehicle fleet, processing equipment and other goods. It would also incentivize the development of wind and solar on public lands and build a workforce for offshore wind.

Finally, the funding package would promote investments in communities by spurring private investment through the tax code, through a revitalized Build America Bonds program, expansions of Private Activity Bonds, and significant enhancements to the New Markets Tax Credit and the Rehabilitation Tax Credit, according to the committee's statement, made last week.

The Benefits of Construction

"Major investment in infrastructure would help to restart the economy by directly sustaining and creating millions of jobs for American workers," said Walter of the Center for American Progress. "These workers would jump-start growth in other sectors by spending their new earnings in their communities, even during this time of social distancing — for example, at local stores and restaurants."

She believes this would then signal private companies to begin hiring and investing in capital projects. 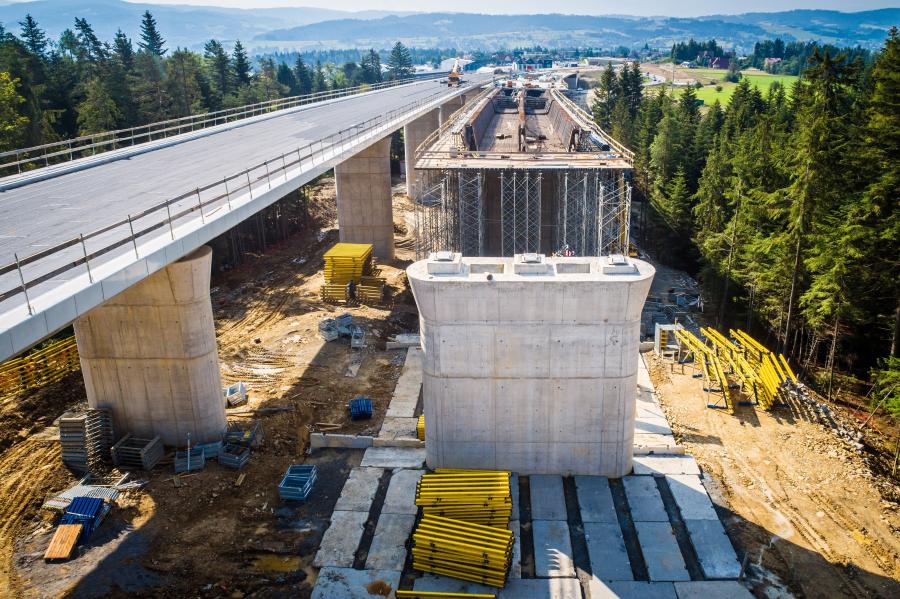 "Federal policymakers must act now to ensure that state and local governments, which oversee most infrastructure, are able to get new projects moving forward as soon as it is safe for everyone to go back to work," she stressed.

Some national transportation groups, such as the American Association of State Highway and Transportation Officials (AASHTO), believe the bill lacks bipartisan support and, if it passes in the House, will die in the Senate. Jim Tymon, AASHTO executive director, expressed disappointment that both the surface transportation reauthorization bill and larger infrastructure package are partisan in nature.

He noted that fiscal relief for state DOTs facing challenging financial situation due to COVID-19 is welcome, but in many cases the bill also creates or increases administrative burdens for states.

He also pointed out that the STARTER Act, introduced by the committee's Republican minority on June 17, "focuses on formula funding programs, streamlining project delivery and ensuring state flexibility — all principles adopted by the AASHTO board of directors. Unfortunately, these critical principles are absent in the Move Forward Act," Tymon said.

Construction Industry: Get It Done

Dave Bauer, ARTBA president and CEO, worries "the clock is ticking" on the surface transportation reauthorization, which expires in September.

"There are about 100 days to get a reauthorization bill done. Achieving that goal will require reconciliation between the House and Senate and the type of bipartisan consensus that has been hallmark of federal transportation law for the past 30 years," he said.

Bauer urged the House and Senate to complete action quickly on their respective bills to protect transportation infrastructure, while Sandherr of AGC likes the broad laundry list of programs included in the Democrats' version. He believes the bill will support demand across many different construction sectors, helping offset expected declines in private sector activity.

"There is a lot to this bill, and there are details in the proposal that must be improved as the measure works its way through the legislative process. Among those is the need to identify additional, sustainable, long-term funding for future infrastructure improvements. However, we support the goal of rebuilding the nation's infrastructure, restoring demand for construction and reinvigorating our economy," Sandherr said.

"That is why we are eager to work with both parties and the Trump administration to improve this proposal, with the goal of ultimately enacting a measure that helps rebuild America." CEG